Continue to Site
An amplifier is a circuit which can produce an output voltage, which is the product of input voltage with a value called voltage gain. An op-amp (operational amplifier) is a kind of amplifier circuit which can perform an operation (addition, subtraction etc.) on the input voltages, apart from simply amplifying the input.
An op-amp (operational amplifier) is an electronic circuit made of several active devices (transistors) and passive devices (resistor, capacitors) etc. which is capable of realizing following the common features:
-extremely high voltage gain
-can amplify input current at the output
-can invert the input voltage at the output
-can produce a sum of input voltages at the output
-can produce a sum of input currents at the output
2) History of op-amp
For every significant invention in history, there must be a time before such an invention where there was a necessity for such a thing. Before op-amps also, there were amplifiers. But they were designed for constant gain only. They were made using vacuum tubes and other components. Moreover the maximum gain of a particular amplifier was limited by the specifications of the vacuum tube.
This was really a problem, especially in early day’s telephone network. The telephone lines used to have thousands of meters long and amplifiers need to be implemented for signal boosting. Those day’s amplifiers had less gain and were very sensitive to temperature and humidity. At each points of the network, amplifiers with different gain were separately designed and implemented.
The telephone engineers in Bell labs were trying to figure out a solution for this. Finally an engineer named Harry Black came up with an idea. Design a general amplifier circuit with gain many times more than any of the normal requirement and then reduce the gain according to required levels using a negative feedback system with that amplifier. Bell labs successfully designed such a circuit using vacuum tubes before 1940s. This ingenious idea triggered the era of op-amps.
The term op-amp first appeared in a patent produced by Karl D. Swartzel of Bell Labs in 1941. This amplifier was capable of doing a summing operation on the input voltages.

First op-amp circuit
[header= History of op-amp Contd…]
The above circuit was capable of adding the input voltages marked as A, B and C. The negative feedback was applied through a variable resistor marked as 16 in the circuit. This op-amp circuit had only one input terminal which is inverting input. We will discuss about inverting input and non-inverting input later in this article.
In 1947 Loebe Julie developed an op-amp with two input terminals (inverting and non-inverting) as we see in present days op-amps. First commercial op-amp was released by GAP/R incorporated based on Loebe Julie’s design. The model name was GAP/R K2-W.

First Commercial op-amp
Early day’s analog computers operated on the basis of summation of voltages and the op-amps were widely used in them for voltage operations. This made the term op-amp very popular in the electronic industry.
After the invention of transistors, they replaced vacuum tubes in all the possible circuits. Hence in op-amps also, the bulky vacuum tubes were replaced by the transistors. This was the beginning of designing op-amp circuit modules. They were built in a small sized circuit board, which can be easily plugged into other larger circuit boards. This result in considering op-amp as an electronic component itself, even though it is build with the help of other basic components. GAP/R also produced a commercial solid state op-amp, the model name was GAP/R P45.

First Commercial Solid state op-amp
Later it was found that several transistors can be integrated into a single silicon chip and thus the size of the entire circuit can be reduced several times. Around 1960s transistor based Integrated chips (IC) were developed. Op-amps were the earliest transistor based circuit built into ICs. It was the Fairchild Semiconductor who released the first commercial op-amp IC, ?A702. It was in 1968, the classic and the most successful op-amp ICs of all times, ?A741 was released by Fairchild. It was designed by Dave Fullagar. Even today the same design is produced by Fairchild and other manufactures also.

Transistor based differential amplifier
[header= Input Differential Amplifier Contd…]
In the above circuit, there are two input terminals, marked as Vin+ and Vin-. The output voltage is obtained differentially across the collectors of two transistors.
The two output pins can be combined to a single output pin using a differential to single ended conversion. We call such a converting circuit as current mirror.

Simple dual-supply
The resistors should be of same type and same value. The only trouble with the above circuit is the loading effect. If the positive side or negative side is loaded too much compared to the other side, the circuit could become unbalanced.
Also if you wonder from where to get these positive and negative supply voltages, let’s see the following circuit. It has a step down transformer, rectifier and positive as well as negative regulator ICs.
The circuit for a regulated dual power supply is shown in the following figure Regulated dual-supply
Component specifications:
T1=Step down transformer, 7.5-0-7.5, 1A
C1=C2=C3=C4=100uf, 25V electrolytic
R1=R2=1KE, 1/4W
U1=LM7805
U2=LM7905
D1=LED (red), 3mm
D2=LED (green), 3mm
[header= Component significance]
Component significance:
T1: If you use a transformer having output voltage more than 7.5V, like 9V, 12V etc, you will get more voltage regulation. The 7805 IC can be safely used up to 14V transformer. If you use transformer with more current rating than 1A, like 2A, 3A etc, you can drive more load.
C1 to C5: The output regulation can be improved by further increasing the value of these capacitors. Extreme stability can be obtained by using capacitors of 1000mfd.
R1, R2: Brightness of the indicator LEDs can be increased by decreasing the value of these resistors. LEDs can be safely used with resistor values above 220ohms with a 5V supply.
U1, U2: If we need any other voltage at the output, simply change these ICs. Regulated ICs are commonly available up to 12V, 7812 and 7912.
For this entire article +5V is VCC and -5V is VEE 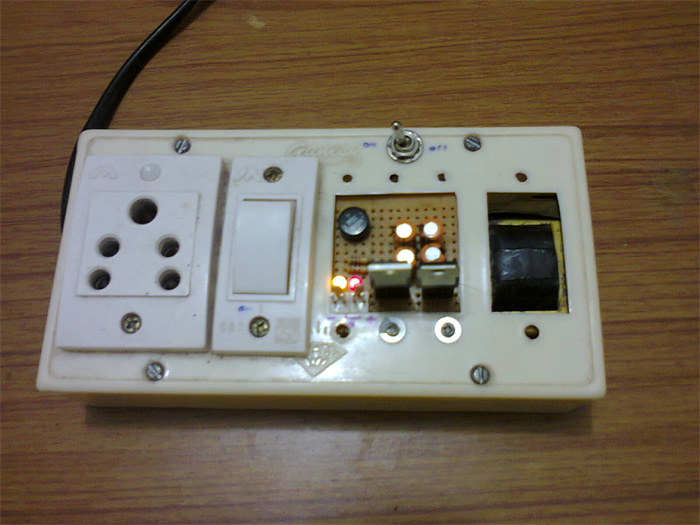 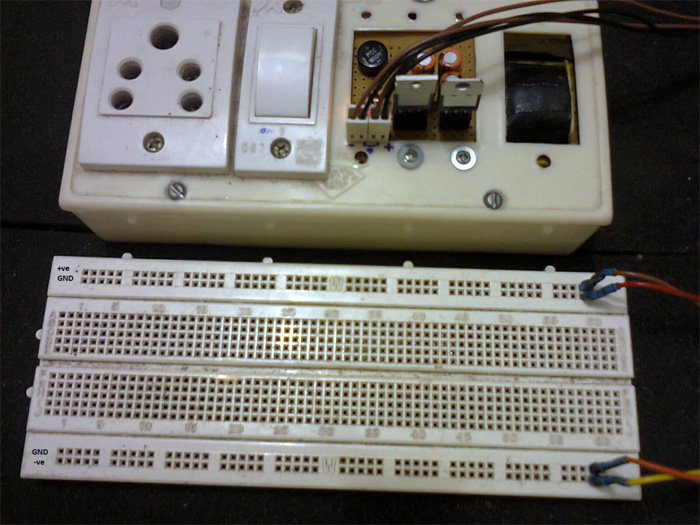 Connecting a dual-supply to bread board
[header= Features of 741 op-amp]
6) Features of 741 op-amp
The 741 is a versatile op-amp IC, and it is the best op-amp IC for the beginners to start with. The design was first released by Fairchild and is still in production. Now a day other manufactures also produce op-amp IC with the same name and design.
Commonly available 741 is an eight pin dual-in-line package op-amp IC. It has only a single op-amp module inside it and it requires dual-power supply.

Pin-out of 741
An op-amp is supposed to have zero output voltage whenever the input difference voltage is zero. But practically this is hard to achieve, because of certain current mismatch at the input terminals. The 741 has two terminals for setting the output voltage to zero, when the input voltage is zero. The pins provided for this function are called offset null.
In these article we are not interested in using these offset null pins. Modern day’s op-amps have internal mechanism to adjust the offset voltage.
Among the input pins, the pin2 is called inverting input and the pin3 is called non-inverting input. These terms are very important with respect to an op-amp and we will discuss them in detail in the following sections.
[header= Testing a 741 IC ]
6.2) Testing a 741 IC
It is important to make sure that the op-amp which we have is working properly, before we proceed to further experiments. Here is a simple method to test a 741 IC, with the minimum components and circuit connection

Testing circuit for LM741 non-inverting pin
Here we’ve shorted pin6 and pin2 of the op-amp. This circuit is commonly called as voltage follower. A voltage is applied to pin3 of the op-amp through the variable resistor (10K). All we need to do is to verify whether the voltages V1 and V2 are exactly same or not. Check them using a multi-meter. If they match exactly, then you have a perfectly working op-amp, and is now ready for further experiments.
The same verification can be done by applying an input voltage V1 on the inverting pin also and checking the output voltage V2 as shown below.

Testing circuit for LM741 inverting pin
[header= Testing a 741 IC Contd…]
The images for the test done are shown in the following figures. 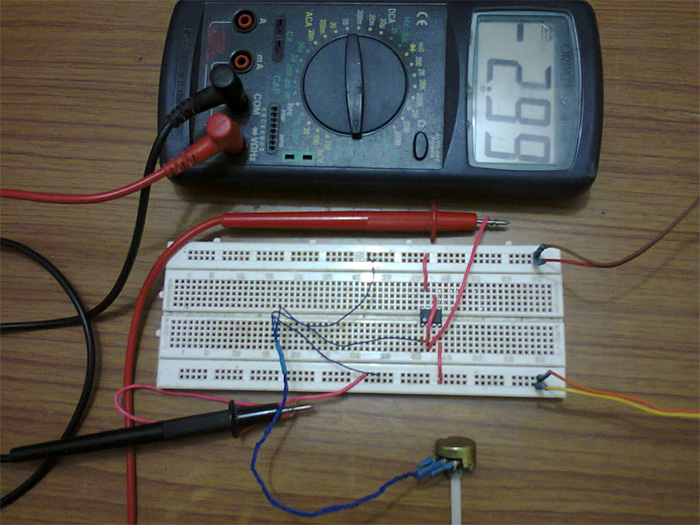 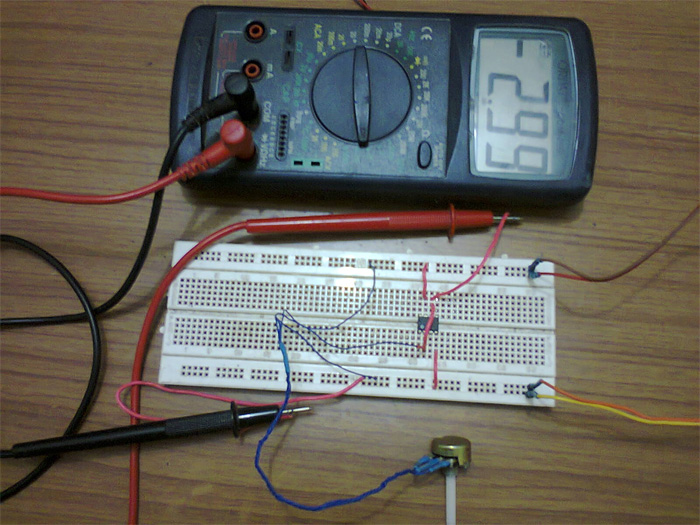 Image of testing circuit for LM741 inverting pin
Filed Under: How to