Bending, twisting, and breaking have been by far the most researched topics when it comes to developing an understanding about these. The same has been brought to light via the Drexel University. However, the Material Science and Engineering department researchers suggest that all kinds of layered materials including thin slices of graphite as well as sedimentary rocks, led to formation of ripples as well as internal buckles as deformation proceeds in them. The pre-existing understanding of this concept via Dislocation Theory successfully establishes the fact about metal deformation. Nevertheless, none of these precisely hold down the responsibility for ripples or kink band formation over multi layered solids.

The research team from Drexel University, that worked under professor Michel Barsoum, reports the implications of concept of “ripplocation” that is a new kind of deformation micro mechanism. 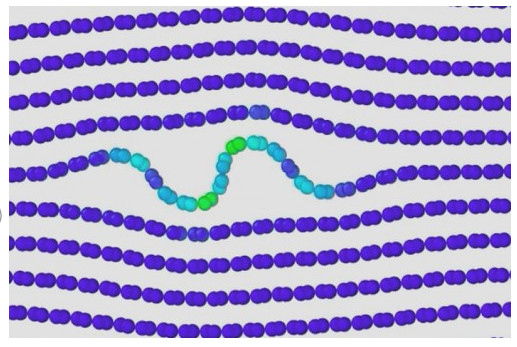 They also proved physically that the mechanism of physical dislocation is completely different from that of ‘ripplocation’. The dislocation theory explains about most observed cases that explain that planes of layered solid substances bounce ahead and come back to their initial position or stay permanently indented as they are loaded or unloaded from their edge. The case of ripplocation states a completely different case under which material comes back to its original form along with dissipation of huge energy quantity. The effect is named as “kinking nonlinear elasticity” almost a decade ago by Barsoum.

The research team also notes that the kinking nonlinear elasticity‘s final effect is a strong function related to confinement of the subject material or the edge constraining. The confinements of this type are mostly present in nature whenever materials get stressed. The team went on to collect evidence for this process in the inner layers of materials with bulky layers though a close examination via computer models under which the graphite atomic layers get compressed edge on. They observed a consistent deformation along the atomic level rippling effect.