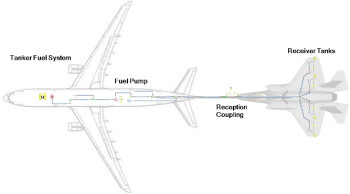 Air-to-air refueling a basic need for military aircrafts that fly over long distances without landings and have no air bases between their first take off point and final destination. The same becomes mandatory when an aircraft is running over enemy territory. There are a number of long range bombers whose final mission might demand them to travel half way around the world. Fighter jets too may need to fly longer in air but their small sized fuel tanks might become a limitation. Many airbases face this problem by deploying large size aircraft that can refill several fighter jet tanks in one go. Special maneuvers like supersonic flights often exhausts all fuel by the time the jet reaches in air. Though air-to-air refueling is a viable solution, exchange of volatile jet fuel at such high altitude can be little riky.

As per most aerospace engineers midair refueling has its own challenges. Michael Croegaert, the aerospace industry manager from Mentor graphics likes to add that, “Military aircraft fuel systems can be very complex because they have to be able to handle many different operational scenarios such as ground fueling as well as air-to-air refueling. The aircraft must maintain a balance all while undergoing dramatic altitude changes and possibly an engine or component failure. This al must be done while minimizing weight and utilizing irregularly shaped spaces for fuel storage.”

A process called inerting is used to make air-to-air refueling system safer. Under this process, ullage is filled with an inert gas that brings down the concentration of volatile vapors and oxygen during transfer. However, if the operational conditions can be simulated by engineers the functionality of this operation can be increased to a larger extent. Simulation will assist the engineers in ensuring inertness of ullage vapor and its addition to tanks. The simulations will also allow the engineers to determine the quantity of nitrogen that will be produced by an on-board inert gas generation system to drive out oxygen from the tank. It would greatly support in combustion of fuel vapor.

As Croegaert continues to explain, “Engineers calculate this amount by simulating fuel flow rate in and out of the tank and determining the amount of ullage space that is in the fuel tank at any point of time. The amount of air that is entering orleaving the tank through the vents can also be determined with this simulation. “ A system level simulation would always allow such designs to be tested against numerous scenarios in a very short time.

Croegaert again explains, “Flowmaster provides a large component library, including tailored aerospace components, which allows the engineers to quickly construct and simulate the entire fuel system. A single model can be used to run all of the different test scenarios that must be considered.”

Engineers often turn their attention to 1D steady-state simulations to determine the required specification as well as size of fuel system components. As Croegaert instructs, “It is much simpler to determine sizing and flow balancing requirements in a steady state than in transient conditions. A good example of this is line sizing. There is an optimum flow rate and pressure for refueling the aircraft to achieve this along with balancing the inflow from either side of the aircraft to the other. Steady-state analyses can be run to find the optimum line size and flow restrictor sizes for achieving the optimum performance.”