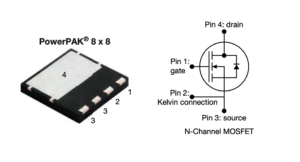 The new device also delivers a 60 percent lower-gate charge. This results in the industry’s lowest on-resistance times gate charge for devices in the same class — a key figure of merit (FOM) for 600 V MOSFETs used in power-conversion applications.

Vishay is offering a broad line of MOSFET technologies that support all stages of the power conversion process, from high voltage inputs to the low-voltage outputs required to power the latest high tech equipment.

With the SiHH070N60EF and upcoming devices in the fourth-generation 600 V EF Series family, the company is addressing the need for efficiency and power density improvements in two of the first stages of the power-system architecture — totem-pole bridgeless power factor correction (PFC) and soft-switched DC/DC converter topologies.

Built on Vishay’s latest energy-efficient E Series super-junction technology, the SiHH070N60EF features a low typical on-resistance of 0.061 Ω at 10 V and ultra-low gate charge down to 50 nC. The device’s FOM of 3.1 Ω*nC is 30 % lower than the closest competing MOSFET in the same class. These values translate into reduced conduction and switching losses to save energy.

For improved switching performance in zero voltage switching (ZVS) topologies, such as LLC resonant converters, the SiHH070N60EF provides low and effective output capacitances Co(er) and Co(tr) of 90 pf and 560 pF, respectively. The device’s Co(tr) is 32 percent lower than the closest competing MOSFET in the same class.

Offered in the PowerPAK 8×8 package, the device released is RoHS-compliant, halogen-free, and designed to withstand overvoltage transients in avalanche mode with guaranteed limits through 100 percent UIS testing.

Samples and production quantities of the SiHH070N60EF are available now, with lead times of 10 weeks.