Continue to Site
Scientists have utilized a ‘thermal metamaterial’ to regulate the discharge of radiation at extremely high temperatures, which is an advancement that could introduce gadgets able to effectively culture waste heat from factories and power plants. 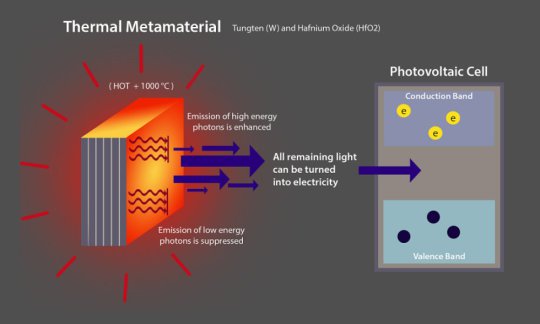 On an average 50 to 60 percent of the overall energy produced in oil-based and coal-based power plants is wasted as heat. But, thermo photovoltaic gadgets that produce electricity from thermal radiation may be availed by industrial pipes in power plants and factories, as well as on automotive engines and car engines exhaust systems for recapturing much of the exhausted energy.
In a novel study, scientists illustrated how to restrict the release of thermal radiation to a segment of the spectrum most required for thermo-photovoltaic technology. “Such gadgets need spectrally fabricated thermal emission at high temperatures and our study reveals that intrinsic substances properties can be regulated so that an extremely hot element glows only in few colors,” says Zubin Jacob, an assistant lecturer of computer and electrical engineering at Purdue University. “The central idea is to begin regulating thermal emission at extremely high temperatures in methods that have not been tried before.”
The metamaterial layer of thermal substances – nanoscale layers of hafnium oxide and tungsten was utilized to suppress the release of a single portion of the spectrum while augmenting emission in another. The research work has been performed by scientists at Purdue, the Hamburg University of Technology in Germany, Helmholtz-Zentrum Geesthacht Centre for Coastal and Materials Research in Germany and University of Alberta in Canada. The study details, for the very first time, about the technique utilized for thermal emission in high temperature meta-materials also known as refractory meta-materials.
The grounding principle of a photovoltaic cell is that a semiconducting substance is highlighted with light, making electrons move from one level of energy to other. Electrons present in semi-conductor occupy a space of energy called as the valence band, while the substance is present in the dark. But the illuminating light on the substance leads to electrons absorbs energy, moving them into an area of bigger energy known as conduction band. As the electrons shift from the conduction band to the other, the leave behind the holes present in the valence band.
“If there is a certain level of energy below the band gap, which is mostly wasted,” says Jacob. “So what you intend to do for better-efficiency thermal energy conversion is suppress the release of thermal power below the band gap and augment it above the band gap, and it is what that we have done. We have utilized the topological transition in such a way that was not practiced before for thermal suppression and enhancement. It allowed us to illuminate light only within the spectrum of energy and above the band gap.”
The study was funded by the German Research Foundation, and it is expected that future study will comprise work to transform heat radiation from a thermal meta-material to electron-hole pairs in semiconducting substances, which is definitely a critical step in enhancing the technology.
Filed Under: News