Ragib Hasan, an assistant lecturer of information and computer sciences in the UAB College of Sciences and Arts and Rasib Khan, Ph.D. a recent postdoctoral graduate student, presented the prototype and method of a wearable cloud jacket at the 40th Institute of Electronics and Electrical Engineers Computer Society International Conference on Computers, Applications and Software.

Utilizing 10 low-cost, credit-card sized computers known as Raspberry, three power banks, and a tiny remote touch screen display, Khan, and Hasan introduced a wearable device that can bring all mobile computing technique together, crafting the eventual smart gadget. The cloud jacket could prepare the design of mobile as well as wearable gadgets inexpensive, simple and light in weight, by enabling users to hit into the resources of the wearable cloud, instead of trusting solely on the potentials of their mobile hardware. 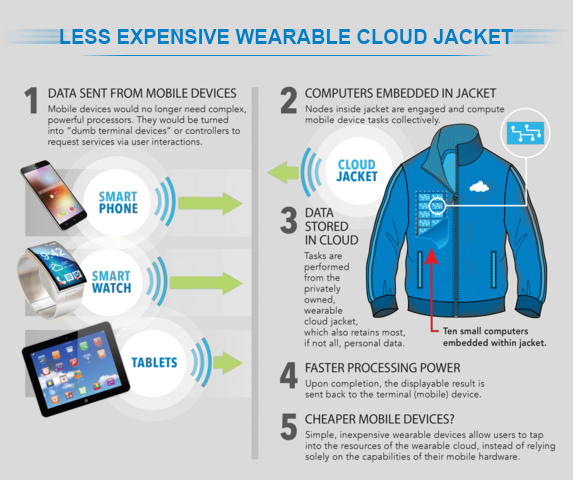 “Presently if you intend to possess a smart watch, an exercise tracker, smart glasses and smartphone, you have to purchase individual costly gadgets that are not functioning together,” says Hasan. “Why not grab a computational platform with you that can assist numerous forms of wearable and mobile gadgets? Then such potentialities will become highly cheap.”

The requirement for more robust processors and customer expectations for augmented performance applications have resulted in the design of wearable and mobile gadgets to be costly and intricate. Someone who wants to possess such devices is required to spend around $2000 to $3000 to buy such gadgets. The cloud jacket prototype has approximately 10 gigabytes of RAM, while the average smartphone has just one to three gigabytes. In concern to storage, each Raspberry Pi inside the jacket possesses 32 gigabytes of available memory.

Most of the wearable and mobile gadgets are crafted with processors that are approximately 10 times slower than a laptop or slower processors, limiting the sorts of applications that can be operated on them. With mobile apps becoming more intricate, novel and more robust versions of wearable and mobile gadgets are regularly released for keeping up with alterations in technology, leading to augmented prices.

“Our overall approach is to prepare a generic platform or environment that users can personalize as per their needs,” says Khan. “The wearable cloud can perform as an application platform, so instead of transforming or intending to upgrade hardware, such wearable model offers a platform, and develops can create anything above it.”

Conclusion – “Another application area that we can serve with this device is hospital gowns,” says Hasan. “When a patient enters in they are linked to monitors to avail heart rate, blood pressure, and other essentials. Whenever a patient has to move to the restroom or needs to move around, they have to look after each aspect with a big pole linked to all devices. Instead of this, we are placing sensors inside a vest that can be incorporated over the hospital gown itself. We are offering a small form of wearable cloud within the vest so that vest itself can gather information like the temperature of patient and more.”