We cannot expect soft robots and stretchy t-shirts to become a reality for the world unless stretchy power sources come to light. And the good part is there have been numerous developments in this respect. Apart from the Harvard team that was successful in creation of a completely soft autonomous robot called octobot, a recent addition has been made to this domain with the stretchy supercapacitors. 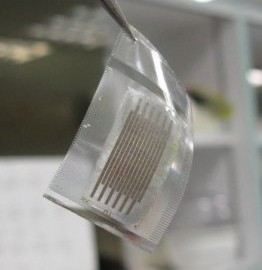 The customary batteries that we have been using for long are mostly rigid and thick, completely inappropriate for powering malleable materials. A more suitable option for such products has been produced by a team of researchers with the name of micro-supercapacitors that have been created with the ribbons of graphene. The complete summary of this project will be presented by the team at the 252nd National Meeting & Exposition of the American Chemical Society (ACS).

Xiaodong Chen, the Ph. D, adds up, “Most power sources, such as phone batteries, are not stretchable. They are very rigid. My team has made stretchable electrodes, and we have integrated them into a supercapacitor, which is an energy storage device that powers electronic gadgets.” The initial supercapacitors were developed in year 1950s and are known for having longer life and better power density as compared to the ideal capacitors that are used in everyday life. As more and more devices have shrunk, the supercapacitors have brought forth a new generation of 2D micro-supercapacitors that can be integrated into all kinds of electronic devices including mobile, computers, and others. These supercapacitors were, however, rigid and were thus no match for soft materials.

In a study conducted by the team working with Chen of Nanyang Technological University in Singapore, they worked on developing a micro-supercapacitor from simple graphene. The carbon has yet been acknowledged for its conductivity, strength , and thinness. It is also very flexible and foldable, however, lacks the capacity to be stretched. In order to fix this problem, the team took idea from human skin. Skin contains a wave-like microstructure which inspired the team to manufacture graphene micro-ribbons in form of waves. They used chemistry to make this material in place of other physical methods like shaving.

Chen explains, “We have more control over the graphene’s structure and thickness that way,. It’s very difficult to control that with the physical approach. Thickness can really affect the conductivity of the electrodes and how much energy the supercapacitor overall can hold.” In order to make them stretchable, they placed the ribbons over ridges leading to formation of a wave like framework. The design permitted the material to stretch without any graphene electrodes of superconductor deforming, cracking, or detaching.The team also developed kirigami structure.