Inertial sensors are used to transduce inertial force into measurable electrical signals to measure acceleration, inclination, and vibration of an object. Micromachining technology has made it possible to produce MEMS (Micro Electromechanical System) inertial sensors using single-crystal silicon sensor elements. These micron-sized sensors meet all major system design drivers like low-cost, high performance, high precision, and small form-factor. Based on the same principles as of macroscopic inertial sensors, MEMS inertial sensors can detect the slightest change in position, orientation, and acceleration of an object several metres long using a sensor unit as small as few micro-meters in dimensions.

The inertial sensors are generally part of a larger control system in any application or device. Mere information of acceleration or angular movement of an object is of no use.  The information collected from inertial sensor is always used to control movement of the device itself or is used for activating an actuator, like to open an airbag of a car.

The inertial sensors are also used to monitor position and orientation of robotic manipulators and unmanned robotic vehicles. In medical applications, these sensors are used for monitoring patients with specific conditions like for monitoring patients having Parkinson’s disease. High-end inertial sensors are used in military and aerospace applications like smart ammunition, aircraft dynamics control, crash detection, seat ejection system in aircrafts, and microgravity measurement.

Accelerometers
Accelerometers consist of a mechanical sensing element that can measure acceleration in one or more axis. The sensing element consists of a proof mass attached to a reference frame by a mechanical suspension system. In MEMS sensors, proof mass is an extremely small seismic mass and the suspension system is built from silicon springs. 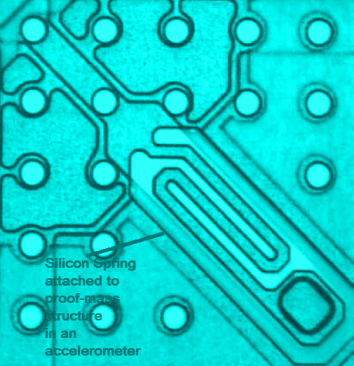 Top-view micrograph of an accelerometer quadrant

The following equation gives the resonant frequency of the sensor:
fn = √(k/m)

The following equation gives the sensitivity of the sensor (in open loop):
S = m/k

You can see, then, that if the sensitivity is increased, resonant frequency decreases and vice-versa. This trade-off can be adjusted with a closed-loop system. The damping coefficient determines the maximum bandwidth of the accelerometer. In MEMS accelerometers, damping coefficient is often variable and increases with displacement of the proof mass.

In all types of micro-machined accelerometers, the displacement of the proof mass is measured by position measuring interfaces, like in a capacitive measurement, there are movable plates attached to proof mass which move along the proof mass between fixed capacitive electrodes. There are many types of sensing mechanisms that are used in the design of accelerometers. Some of the common sensing methods include piezoresistive, capacitive, piezoelectric, optical, and tunnelling current.

In a closed-loop accelerometer, there is a feedback system that applies a feedback force to the proof mass proportional to its acceleration putting the proof mass back to its rest position. This way, the non-linear factors are cancelled out, sensitivity gets dependent on the feedback control and dynamics of the sensor can be precisely controlled using an electrical signal controller. The proof mass can be placed back to its rest position using electrostatic, thermal or magnetic actuation. The feedback signal controlling the feedback force can be analog or digital. All this adds more complexity to the sensor design. 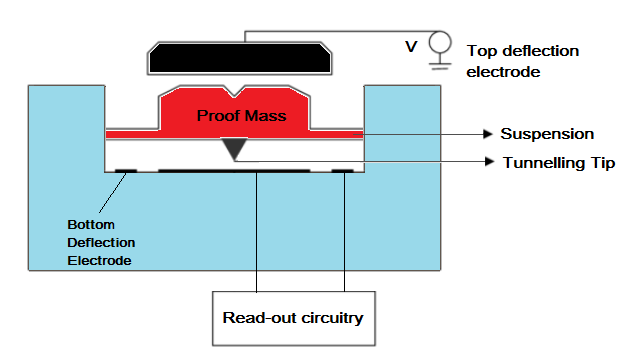 Where,
I is Tunnelling current between tip and electrode,
I0 is scaling current depending upon the material used,
ᵦ is conversion factor,
φ is tunnel barrier height in eV,
and z is tip-electrode distance. 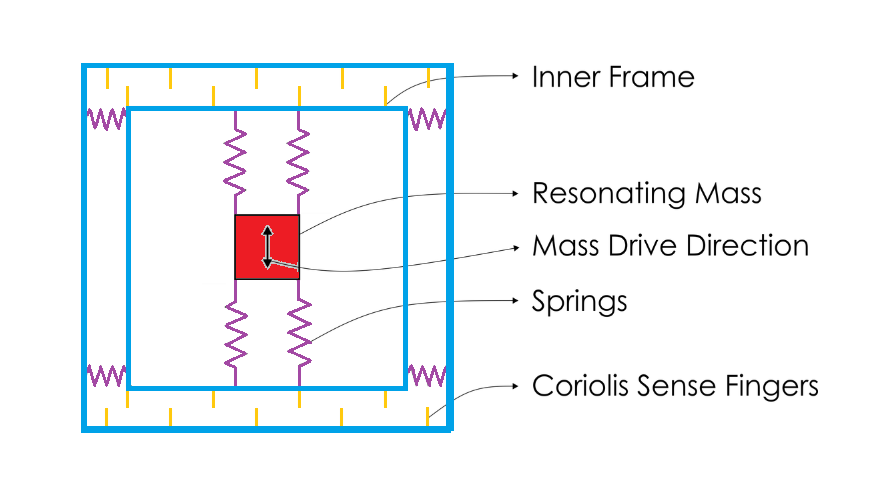 The vibrating structure consists of proof mass that is connected to a inner frame by a pair of springs. The inner frame is connected to an outer frame by another set of orthogonal springs. There are capacitive sense fingers between the inner frame and the outer frame attached along the orthogonal springs. The Coriolis force is proportional to both the angular velocity of the rotating object as well as velocity of the object towards or away the axis of the rotation. The proof mass is continuously driven sinusoidally along the inner springs. When the system experiences rotation, the resonating proof mass experiences Coriolis force along the orthogonal springs attached between inner and outer frame. This changes the distance between the capacitive sense fingers and so an electrical signal proportional to Coriolis force is output. As the Coriolis force is proportional to angular velocity, the electrical signal due to it is also proportional to the angular velocity of the system.