MicroPython implements the Python 3 programming language for microcontrollers and microcomputers. It is a firmware solution designed to implement high-level language features of Python into low-level hardware platforms. The firmware is optimized to run in constrained environments while allowing a small subset of Python 3 standard libraries into embedded programming.

MicroPython firmware can run in a footprint of 256 Kilobytes and  16 Kilobytes of RAM. MicroPython can offer several high-level programming features like arbitrary precision integers, object-oriented programming, generators, closures, exception handling, and list comprehension, even with such limited code space and memory. Usually, such features are not available in typical microcontroller programming. All these features are available with access to low-level hardware via the machine module of the MicroPython firmware.

Plus, MicroPython compiler and runtime code includes an interactive prompt called REPL (Read-Eval-Print-Loop) that allows executing commands from a desktop computer directly on an embedded platform. The commands using REPL are executed via UART, where the target microcontroller board is connected to the host PC over USB. This is useful in quick and real-time testing and debugging of embedded systems.

One of the notable high-level language features allowed in MicroPython is multithreading. Typically, bare metals are void of multithreading capabilities. The multithreading feature of MicroPython firmware allows speeding up embedded applications by handling many embedded tasks simultaneously from a single microcontroller and lets you think out of the typical programming loops.

A microcontroller board, RTOS, or operating system supported by MicroPython is called a MicroPython Port. It is important to know that many features of core MicroPython may be unavailable for a particular port, i.e., it may not be supported in a given microcontroller, RTOS, or operating system. Plus, a particular port may have additional modules and functionalities of MicroPython. For example, the MicroPython version for ESP32 and ESP8266 has additional libraries and functions available to handle network connections and supports WebREPL (REPL over web sockets).

Supported Boards and MicroPython ports
MicroPython is available for several common platforms, including x86, x86-64, ARM-Thumb, and Xtensa. It is remarkably fast, with code execution possible at speeds up to 168 MHz. The official microcontroller board supported by MicroPython is pyboard. The pyboard has the following salient features. 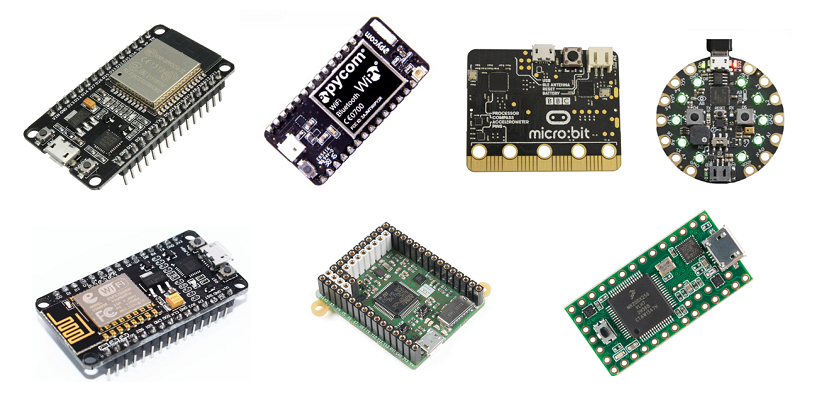 Examples of MicroPython Boards and Ports

Zephyr is one of the real-time operating systems supported by  MicroPython. MicroPython can run as a thread in other RTOS like pyRTOS and FreeRTOS.

Extending MicroPython libraries
It is also possible to extend the implementation of built-in MicroPython libraries. Any user-defined module named module.py overwrites the standard MicroPython umodule within a package. The package can still use the built-in functionalities by importing the u-module directly. Most of the libraries in micropython-lib have been written in the same manner.

Conclusion
MicroPython can be the next revolution in the microcontroller world after the Arduino. First of all, MicroPython has accomplished the major task of introducing Python to microcontrollers and MCU-based embedded systems. Python is the one-stop for developing networked and AI-backed applications. The use of multithreading in embedded applications will be another important milestone set by the MicroPython initiative.