The 1-Wire protocol is a single-wire interface, half-duplex, bidirectional, low-speed and power, long-distance serial-data communication protocol. Although this protocol is classified as a 1-wire standard, at least two wires are required in the 1-wire standard bus — one for the data and/or power supply and another for the ground return. An additional wire might be necessary, depending on the power mode.

This is a low-speed serial communication standard, with a typical data speed of 15.4 kbps. The bus can be overdriven to a maximum data speed of 125 kbps. The data speeds in the 1-Wire protocol are low compared to other standard serial-data communication protocols (like UART, I2C, and SPI), but the 1-wire bus is extremely economical in production and operation. It offers a simple hardware implementation and an extremely low-power footprint.

Although the hardware is simple, the software implementation on the microcontroller side is highly complex. And despite a low power consumption, it can communicate data over relatively long distances.

The 1-Wire protocol is used by temperature sensors, real-time clocks, timers, EEPROMs, and the popular iButton. Most of these 1-wire slave devices are products of (what’s now) Maxim Integrated.

Parasitic powering requires strict timing and supply to the exact specification to maintain the slave device live without fail. This is why this mode is less reliable. Often, an additional hard pull-up is used to ascertain the power supply.

The parasitic powering of 1-wire devices.

The parasitic powering of 1-wire devices with an additional hard pull-up.

In a conventional powering mode, 1-wire slave devices are externally powered. An additional wire is traced to each 1-wire slave. The external power supply to the slaves ensures safe operation even in harsh, high-temperature conditions.

The conventional powering of 1-wire devices.

How the 1-Wire protocol works
This interface is not usually used in microcontrollers or microcomputers. It’s often implemented by software using bit-banging or a universal asynchronous receiver-transmitter (UART).

Since the 1-Wire standard does not use any clock signal, communication of the ‘0’ and ‘1’ bits occur by setting the logical level of the data line for a specific time slot. Usually, the time slot is 60 us long. There’s also an interval of 1us between each time slot, so that the data line is pulled HIGH again by the pull-up resistor. During each 60 us time slot, 1 bit is communicated between the master and slave. The time slot can be up to 10 times shorter if the bus is overdriven.

The slave devices pulse at about the mid-time slot (i.e. 30us in the 60us time slot). They have a basic monostable multivibrator to detect the duration of the pulses. The ROM and function commands are 8-bit long. The data communicated is also in groups of 8 bits. The error detection is performed by an 8-bit cyclic redundancy check. 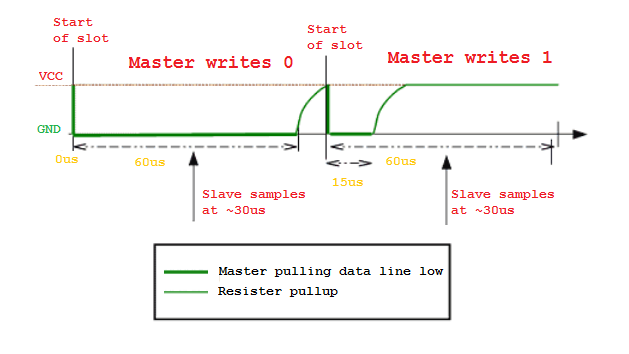 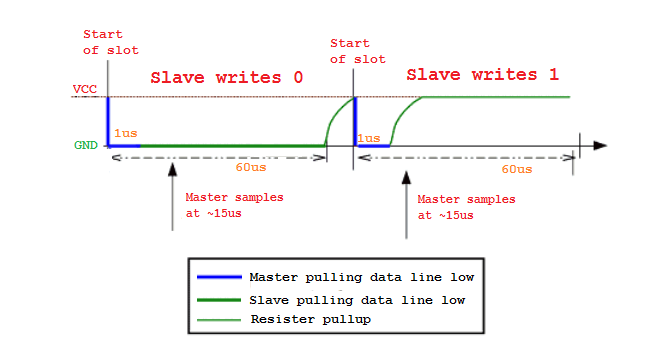 The master can communicate with up to 100 slaves on a 1-wire standard bus. However, the greater the number of 1-wire slaves connected to the bus, the more time the master needs to pull data from them. The software libraries typically use bit-banging or the UART to time pulse durations. The LSB is always sent first in the 1-Wire protocol.

Protocol implementation
There are five types of bus signals in 1-wire communication, and each one is initiated and controlled by the master. These signals are Reset, Presence, Write 0, Write 1, and Read.

In terms of Arduino, the polled implementation (software-only) can be done using the delayMicroseconds() function. This function has this source code:

For Arduino, the 1-wire write operation can be performed with this function:

For a computer, the same function can be written in C++, as follows:

For Arduino, the 1-wire read operation can be performed by this function:

For a computer, the same function can be written in C++ as following.

For Arduino, the reset and presence operation can be performed using this function:

For a computer, the same function can be written in C++:

Microcontrollers and computers can use the UART for the interrupt-driven implementation of the 1-Wire protocol. Computers might need an external UART chip or breakout board for communicating with 1-wire devices.

The UART’s Tx and Rx must connect to the data line of the 1-wire bus. The UART port must have an open-collector buffer so that the slave(s) can pull down the data line. For the reset and presence signal, the baud rate must be set to 9600, and the controller/computer needs to transmit 0xF0.

If there’s no slave connected to the bus, the received value is 0xF0. If any value other than 0xF0 is received, it indicates the presence of a 1-wire slave(s) on the bus. 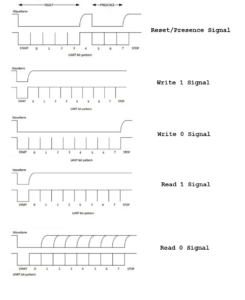 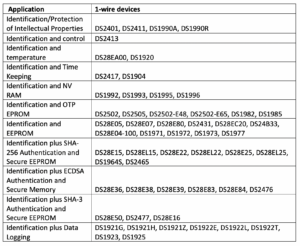