This project is an implementation of wireless temperature reading using the 434 RF module. The module has a range of 50-60 meter and can be extended to 300-350 meter using the antenna with RF module and increasing its transmission power. The project gets the embedded intelligence from Arduino Pro Mini. The temperature sensor used in the project is LM35 which can read temperature between -40° to 150° C. 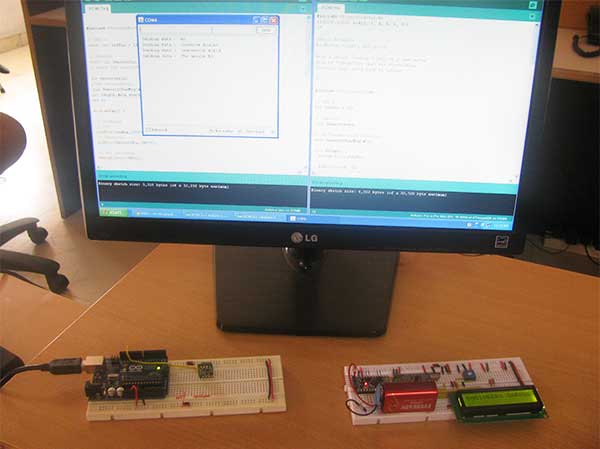 On the temperature monitoring circuit, an RF receiver is used which has its serial out pin (Pin 2) connected to Pin 11 of the receiver side Arduino board. An LCD is interfaced to the Arduino board for displaying temperature readings.

The standard code library for interfacing Arduino UNO and Arduino Pro Mini are used in the project to program LCD with the board. 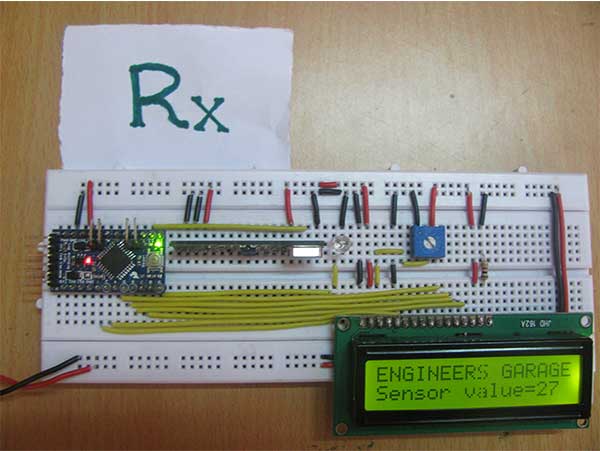 According to the datasheet of LM35 the scale of output voltage variation is given by:

Therefore, the temperature from the voltage output of the sensor can be deduced using the following formulae -:

Tambient = 0.1* Vout where Vout is measured in millivolts

The output pin of the temperature sensor is connected to A2 analog pin of the Arduino. The analog voltage is read by the Arduino using standard library functions in the program code. The program code of transmitter side Arduino not only reads the analog reading, it converts the reading to a series of decimal characters and serial them out to the RF transmitter. 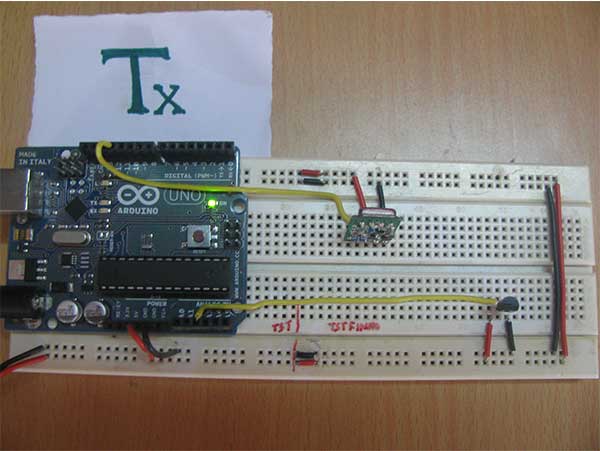 On the transmitter side Arduino, first, the program code imports the required standard libraries. The VirtualWire library is required to read the analog reading from pin A2. Global variables ledPin and Sensor1Pin are declared and mapped to Pin 13 where transmission progress indicator LED is connected and Pin A2 where output pin of LM35 temperature sensor is connected respectively. A character array Sensor1CharMsg is declared to stored decimal representation of the temperature reading.

The temperature reading is serially out as human-readable ASCII text using the Serial.print() and Serial.println() function.

The transmission progress indicator LED is switched on by passing a HIGH to pin 13. The character message containing the temperature reading is sent serially using the vw_send() function and vw_wait_tx() is used to block transmission until a new message is available for transmission. The LED at pin 13 is switched OFF by passing a LOW to indicate successful transmission of the message.

This ends the transmitter side Arduino code.

On the receiver side Arduino, the program code first imports the required standard libraries. LiquidCrystal.h is imported to interface the LCD and VirtualWire library is imported to read serial input from the RF receiver. The pins 2 to 7 are mapped to Liquid Crystal object LCD.

The pin 13 where transmission progress indicator LED is connected is assigned to led pin variable and two variables – “Sensor1Data” to capture analog reading of LM35 in integer form and “Sensor1CharMsg” to store character representation of the reading are declared.

A setup() function is called where baud rate of the Arduino is set to 9600 bits per second using Serial.begin() function. The LCD object is initialized to 16X2 mode and initial messages are flashed to the LCD. The led connected pin and pin connected to RS and RW are set to output mode using the pinMode() function.

The RF transmitter and receiver module does not have Push To Talk pin. They go inactive when no data is present to transmit or receive respectively. Therefore  vw_set_ptt_inverted(true) is used to configure push to talk polarity and prompt the receiver to continue receiving data after fetching the first character. The baud rate for serial input is set to 2000 bits per second using vw_setup() function. The reception of the data is initiated using vw_rx_start().

A loop() function is called inside which, array “buf[]” to read serial buffer and “buflen” variable to store buffer length are declared.

The null character is detected in the buffer stream so that no garbage value goes to the LCD display. The characters received from the buffer are converted to the integer value and stored in “Sensor1Data” variable.

The variable value along with relevant strings enclosed is passed to the microcontroller’s buffer and passed to the LCD for display in a presentable format.

This ends the loop() function and the receiver side Arduino code.