Working of NOT Gate using transistor

The NOT gate is the basic logic gate among all the gates. It gives only one output which is the negation value of the corresponding input. When the input is forced to low value it gives high value at the output and vice – versa.

TRUTH Table of NOT Gate 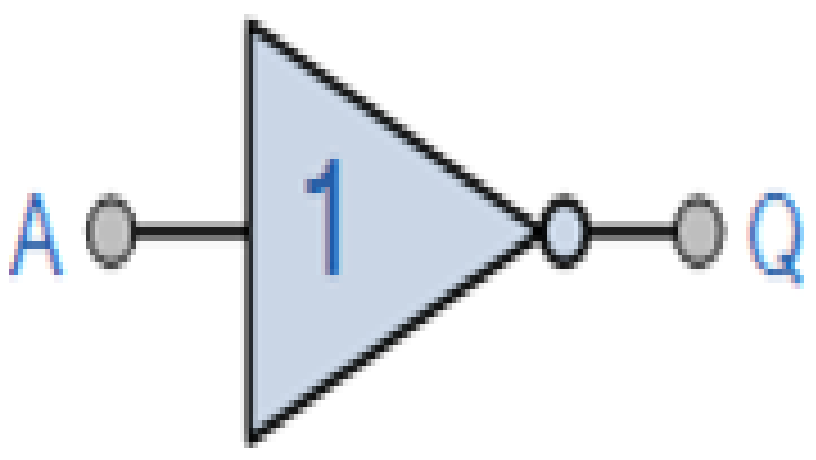 A transistor name reflects the type of semiconductor it is made of and the number of terminals. Here we are using BC547 transistor which is an NPN bipolar junction transistor where prefix BC refers that the semiconductor is of silicon type and is used for general purpose. A bipolar transistor is having three terminals- emitter, base, and collector. You can also use another transistor of BC range (BC548, BC549); they also work well.

• 5V power supply or a battery.

• Multimeter
Circuit explanation
When initially our switch is in off state there is no power supply at the base of the transistor. At the base there is zero current and at the collector, we have small reverse saturation current (Ico) which makes the collector more positive as compared to the base. Thus base-collector junction is reverse biased. Now as we know the emitter is grounded or it is at zero volts but still there is a flow of non-zero reverse saturation current through the emitter to compensate the diffusion current. An equal and opposite current flows in the base-emitter junction (-Ico). This negative value of current (-Ico) makes base-emitter junction reverse bias.
As a result, both base-collector junction and base-emitter junction are reversed biased. Now there is no flow of current from collector to emitter and they act as an open switch. In this state, the transistor is said to be in its Cutoff state. Therefore, all the current through the R2 resistance passes to the LED which turns it ON. Hence at the output, we get a high voltage corresponding to the low voltage of input.
Now when we press the switch then our base gets a positive 5V supply which turns ON our transistor. Here the base voltage is pretty much high which drives the high base current. As the base current increases,  it increases the collector current as well. The voltage drop across the resistor (R2)  is big enough to lower the collector voltage below the base voltage since collector current is very high. Thus the collector to the base junction is in forward bias. The emitter to the base junction is already in forward bias state since emitter is connected with ground and base is with high voltage. This state of the transistor is termed as Saturation state. There is a smooth flow of current from collector to emitter and the transistor acts like a close switch. As we know current always passes through the low resistance path so here all the current gets a shorted path from collector to emitter. The current through R2 resistance then flows from collector to emitter and into ground. Since all the current passes through the transistor, there is not enough going through the LED, and therefore it goes OFF.
Now we can see that here the transistor is acting like an inverter and gives inverted value at the output.