All projects by David Hanson are driven by the long term objectives he has. He wishes to improve lives of regular people through cost-effective, highly intelligent robots that can serve, teach, entertain, as well as develop deep rooted relationship with their clients. Andy Rifkins previous Vice-President from Mattel Toys and he had been a lifelong fan of work and ideas proposed by Albert Einstein. Hanson as well as his team working at Hanson Robotics associated with Rifkin for creation of Professor Einstein, a 14.5-inch personal robot.

Professor Einstein has started a Kickstarter Campaign to sponsor its first round of components production. The company presented the robot at this year CES. They have made it to be compatible with the iPhone 5s, 5, 5c, 6s Plus, 6s, Air 2, 3rd and 4th generation of iPad Mini, Air 2, and iPad Air. It can also sync with Android OS 4.4.4 and the succeeding devices. It seems a little strange that iPhone 7’s haven’t been included in the list of devices that can be compatible with it. The robot gets its power from two NIMH 2.4 VSC kind of rechargeable batteries. Upon full charging, the battery lasts for around three hour. It has a Stein-o-Matic companion app that directs all moves of the robot. However, the maker warns that it is not to be given in hands of kids and adult supervision must be there when kids below 13 years are handling it. 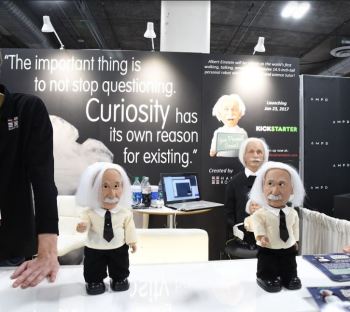 This one has been created to be a companion and family robot and is full of features. It has more than fifty gesture controls as well as facial expressions that have been instilled into this system. The robot has been programmed to determine voices and get engaged in conversations with others. There are numerous interactive games that have been included in this robot and app blend while there are some other that are meant to teach the user math and science concepts. When you tell Professor Einstein regarding the appointments it will automatically activate calendar functions and it will remind you about your events.