Continue to Site
Day before yesterday, we told you about the BlueBox engine from NXP semi-conductors that was built with a solo purpose of taking a step closer to fully-autonomous driving concept. Working on the concept, Mobileye declared that it will bring-in the next iteration of EyeQ5 chip shortly. It has been years since Mobileye has tried to make machine vision central facet of autonomous vehicles.
However, EyeQ5 will mostly focus on abstracting data from sensors along with cameras and radar. Even though the company needs two more years to bring forth the samples, the company says the advanced version of this chip will not only support the normal functions like blind spot assist or lane change warning systems, it will fully support hundred percent autonomous driving. 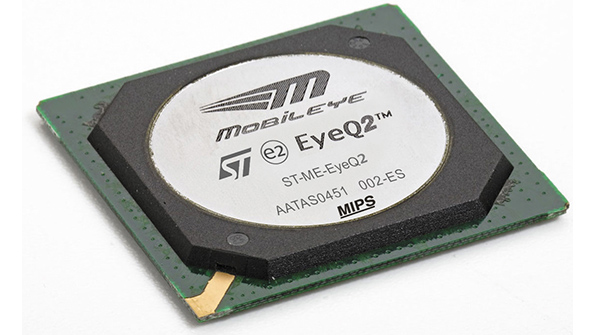 In words of Ziv Aviram, the Chief Executive of the company, “We have agreements with several leading automakers on systems that will allow drivers to fully disengage during highway driving beginning in 2018. The new EyeQ5, expected to launch in 2020, will be the flagship system that turns the concept of fully autonomous cars we envision in reality.”
At present, Mobileye is working in association with STMicroelectronics for development of a new system that could be manufactured on a 10nm or smaller processing node. EyeQ5 will consist of eight CPUs in the core that will work in coordination with Mobileye’s vision processors as per the chip’s block diagram. As per company statement, “these processors are optimized for a wide variety of computer-vision, signal processing, and machine learning tasks.”
EyeQ5 will also come with four types of accelerators, every single one of these can be programmed for a particular set of algorithms which will save hell lot of computational and power time. The advanced system will also execute high-end 12 trillion operations per second while controlling the power consumption figure under 5 watts. That is one of the biggest breakthroughs over the last version of this chip that could carry out 2.5 trillion operations per second.
EyeQ5 will offer Mobileye with the strongest edge over all those companies that are looking forward to take lead in the autonomous driving segment. The present day systems are only capable of merging sensor data from vehicle’s surroundings and support machine learning algorithms – however the level of emphasis varies by a greater degree.
Speaking of autonomous systems, we cannot overlook the recent submission made by Nvidia that brought forth Drive PX computing platform which carries machine vision processors supporting local machine learning. It is capable enough of merging data from 12 sensors situated across the vehicle’s surface and processing somewhere around 2.3 trillion operations every second.
Filed Under: News