Engineers and researchers across the world have taken all routes to increase the effectiveness and endurance of fuel cells. The most recent development in this direction was the formation of electrolyte on a quantum level. This increased the strength of electrolyte material and gave it an ability to operate for longer periods as and when it was exposed to fuel. The modified electrolyte is composed from perovskite-structured nickelate. Nickelate can conduct both electrons and proton like ions on its own which reduces its strength as an electrolyte. An engineering team working on this project in Harvard John A Paulson School of Engineering was successful in overcoming this obstacle by coating the nickelate surface with a catalyst. This coated nickelate was then infused with electrons that joined the electron shell of positively charged nickel ions. Resultantly, the material turned into an ion conductor from an electron conductor. 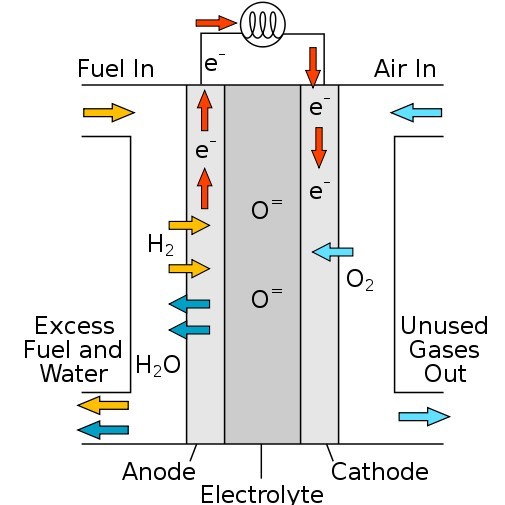 It is being presumed that a development like this will play a vital role in fuel cell quality improvement. Normally, fuel cells use the current generated by flow of electrons between cathode and anode for working. These two ion generating bodies are separated from each other by an electrolyte. Fuel cells do not need any kind of recharging for operation. These mostly need hydrogen based fuels. The hydrogen from the fuel is sent to the anode which then splits into electrons and protons. The electrolyte here works like a filter that keeps away electrons and permit the entry of protons. Electrons are thus, compelled to travel via an external circuit that leads to flow of current.

Over the other end of this fuel cell, the cathode is fed with air. The electrons that travel through external circuit and the protons that flow via electrolyte combine with oxygen to generate heat and water. It is a viable solution to the biggest challenge posed by solid oxide fuel cells. As the cell wears off, the fuel reduces the influence of electrolyte. As a result, the electrolyte permits both electrons and protons to pass through it leading to poor performance of external circuit.