We always keep hearing and speaking about file of different kinds like text file, word file, video file, audio file, image file etc But do you know that everything in Linux is a file? Understanding a file system is necessary part of Linux which we are going to discuss here.

What is the file?

File is nothing but linear stream  or a small block of byte. User can read, write or execute the file. Linux system is used for multiuser purpose so each user can access the file and modify it. The administrator can also set the permission so that noone can modify it without his/her permission. User can be classified in three categories:

User – Owner of the file who generates the file.

Another-  Another person who can access the file after administrator’s permission.

Here, (-) dash is an indication of regular file. The symbol ‘r’ is for read, ‘w’ is for write and ‘x’ is for execute. Each group of rwx is associated with user, group and another category respectively. System doesn’t  understand the file name, it just understands digital value. When file is created by a user or group of users, it is stored as a numerical value in system called User ID Group ID.

Suppose I have created the file named as engineersgarage.txt by touch command:

The following output is displayed on terminal:

A folder in Windows is called a directory in Linux. It’s a special file which associates file names with specific collection or group of files. You can store various files in a single directory. File name contains only valid 8 bit expect Null and forward slash (/) while Directory is a collection of metadata information called inode that contains all the information expect file data. It contains type, owner, permission, modification, time, location of file data, etc also known as metadata.

In Linux, there are 2 kinds of information- instruction (code) and useful data,    whereby the former is called binary object file. Compiler compiles the file and creates object file which is linked with library file and creates executable file. When you create executable file, by default it is generated as a.out file. Refer to the tutorial How to make first C programming in Linux for understanding how to execute file.

Everything in Linux is a file. Kernel is  a collection of files which are written in C language  as well as assembly language. File system is hierarchical structure in Linux which has a different meaning associated with each inode. It is standard tree hierarchical structure  comprising various meaningful directories and files. One special directory file which has the permission to do everything is called root directory. Root is main directory in Linux file system and is indicated as forward slash ( / ). User ID of root is zero in system. Each and every directory is associated under the root.

When the disk is initialized and partitioned in logical block, each partitioned structure contains one type of file system like ext2. File systems arrange files into logical hierarchical structures with directories, soft links and so on held in blocks on physical devices. Devices that contain file systems are known as block devices. EXT2 stand for second extended file system while EXT3 is  animproved version of EXT2 file system. Each file system has different characteristic and performance.

The following output is displayed on terminal:

It represents all directories as Linux file hierarchical system. 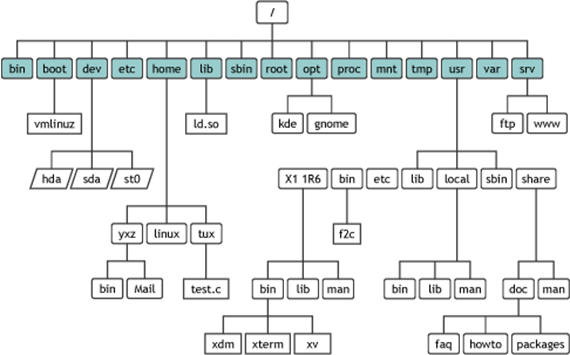 Each directory contains various files according to specific use and configuration. Here I will shortly explain as to which type of file is contained under the various directories. User can see each directory and associated file from command prompt.

Root –   Each directory and single file  starts with root. Root has only write privileges to do anything with file.

Etc –  It contains configuration file of application or program.

Tmp – It is a temporary directory which contains all temporary files created by system and user. All files under this directory are deleted when system is rebooted.

Home – It is a directory where user can store his/her personal data. User can also create new directory  here.

Mnt – It is temporary mount directory where system administrator can mount file systems.

Media – It is temporary mount directory for removable devices like cdrom  andfloppy disk which are located under media directory.

Srv – It stores the related information of specific server services.