Continue to Site
If you are keen to know what occurs to semiconductors under ion attack, you might look at the meteorites when they attack Earth. At least, this is what a group of scientists at Technische Universitat Wien discovered when they joined into the surface of a crystal of a semiconductor with a microscope of an atomic force (AFM). 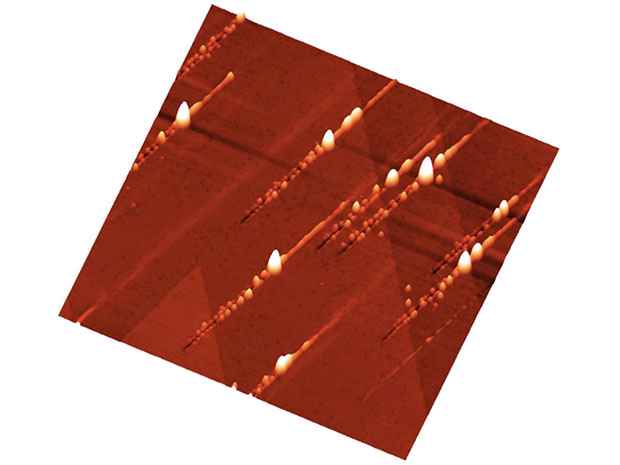 In studies detailed, the scientists attacked the surface of calcium fluoride with both lead and xenon ions. The AFM disclosed the tracks left behind by ions attacking the calcium fluoride surface. Each ion hit generates an initial impact layer and a trench numerous hundred nanometres long that is layered by a group of nanohillocks on both sides. At the end of the trench is a single big hillock prepared as the ion penetrates into deeper coatings of the crystal.
“When we consider the crystal surface with a microscope of an atomic force, we precisely identified the similarities between meteorite and ion effects,” says Elisabeth Gruber, a Ph.D. student who functioned on the research.
Initially, the projectile, grazing across the surface at a scratching angle, accommodates a trench into the crystal surface that can be a hundred nanometres long. Wide ridges occur on either side of the trench, containing minute surfaces known as nanohillocks. While such observations seem like that we should consider, substance on the nanoscale behaves much distinctly than it does on the macroscale. There are all kinds of forces at work on the nanoscale that created the outcome from ion bombardment far from few, like quantum effects that happen when atoms exchange energy.
“When the big-energy ions interact with surfaces of crystal – calcium fluoride in this case – numerous distinct physical impacts have to be taken into consideration,” says Friedricj Aumayr, who headed the research. “Electrons can alter their energy form they can substitute energy with atoms around them and induce vibrations in the crystal lattice, known as phonons. We have to meticulously consider all such effects when we want to comprehend how the nanostructures on the surface of crystal are created.”
It was not sufficient to just observe the impacts of ion bombardment, but the scientists of Vienna required comprehending the functionality by which these impacts occurred. To perform this, they linked forces with scientists from Germany to introduce computer models that help in explaining the mechanical forces that leading to these results.
“With this way, we can find out, how much distinct parts of the crystal surface are heated,” says Gruber. “There are areas which become extremely hot that the material melts, at specific points it can even convert into steam. When we analyse how big these regions are, we can envisage very precisely what the nanostructures on the surface of the crystal will appear.”
With a better comprehension of what occurs to semiconductor crystals during the bombardment of ion and function for the functionality at work, the scientists believe that they have a structure for fabricating and designing nanostructures that can hold out these ion bombardments.
Filed Under: News