Continue to Site
New technology links high-performance microfluidics for processing of sample with dynamic optical switching and tuning, all on a cost-effective ‘chip’ prepared for a flexible silicone substance. For well over years, electronic engineer Holger Schmidt has been introducing gadgets for optical inquiry of samples on chip-based platforms integrated with applications in genres like virus detection, chemical analysis, and biological sensors. 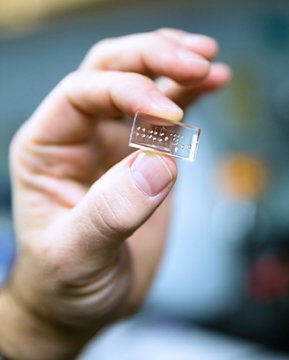 The present gadget from his laboratory is based on new technology that links high-performing micro-fluids for processing of samples with vigorous optical switching and transforming. In conventional gadgets from Schmidt’s laboratory, optical functions were structured into silicone chips utilizing the related to fabrication technology utilized to create computer chips. The novel device is absolutely made of polydimethylsiloxane or PDMS, which is a flexible, soft substance utilized in micro-fluidics as well as in items like medical gadgets and contact lenses.
“We can utilize this fabrication technique now to construct a power-pack device that enables us to conduct biological sample processing and detection of optical on a single chip,” says Schmidt, a Kapany lecturer of Optoelectronics and the director of W.M. Keck Centre for Nanoscale Optofluidics at UC Santa Cruz.
The elasticity of PDMS enables for new techniques of controlling both fluids and light on the chip. Utilizing multilayer soft lithography methods, senior graduate scholar Joshua Parks developed chips comprising both hollow-core and solid-core waveguides for simulating light signals, and also fluidic micro-valves to regulate the motion of liquid samples Parks and Schmidt also introduced a unique microvalve that operates as a ‘light-valve’ regulating the flow of both fluids and light.
“That opens up an entire novel set of functions that we could not perform on a silicon chip,” says Schmidt. “The light-valve is the most interesting element. In additional to a simple off-on switch, we developed a movable optical trap for examining of biological parties like bacteria or viruses.”
In a conventional study, Parks, Schmidt, and his team members at BYU and UC Berkeley illustrated a device that features a PDMS micro-fluidic chip for preparing sample was incorporated with an opto-fluidic chip based on silicon for optical identification of viral pathogens. The novel gadget links both functionalities on the same chip. In addition to this, Schmidt says that the substances are comparatively inexpensive, enabling rapid prototyping of gadgets.
“We can carry the complete chain of fabrication in our laboratory and we can create novel gadgets very swiftly,” he said. Schmidt says that the potential applications for such technology comprise an extensive array of biological sensors and analytical gadgets. For diagnostic of viral assays, fluorescently labelled antibodies can be utilized to tag unique viral strains for optical identification.
The dynamic functioning of the opto-fluidic gadget is accomplished by putting pressure on the opto-fluidic channel, altering its measurements and hence transforming its photonic characteristics. “We can eventually tune the spot technique prepared in the channel by the interference of waveguide that we could not actually perform with the chips based on silicon,” says Schmidt.
Filed Under: News