To aid tackle such challenge, the researchers at the U.S. Department of Energy’s DOE Brookhaven National Laboratory employed a high – resolution electron microscope to study nanoscale details of catalytic particles prepared of cobalt and nickel – inexpensive alternatives to the expensive platinum utilized in most fuel cells today.

The study comprises 3D, dynamic images that disclose how the particles internal and external structure are chemical makeup alter as they become catalytically active. Comprehending such nanoscale chemical and structural features will aid researchers learn characteristics that make the inexpensive particles most effective and devise ways to optimize their performance.

Disclosing the details of how such structures created, comprising their chemical make-up was not a simple task. The researchers utilized chemical sensitive electron tomography, which is a nanoscale version of a CAT scan to identify the chemical and structural happening on the surface and inside the particles in 3D as they were oxidizing. Such process occurs as the sample gets heated to 500 Degree Celsius. 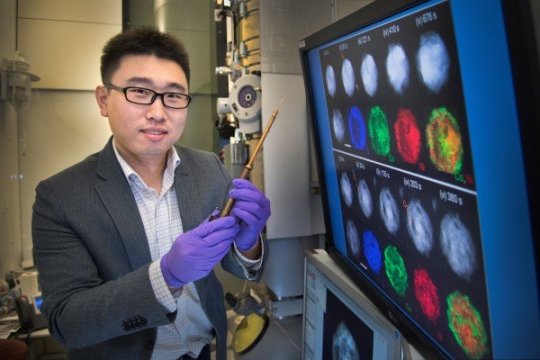 “We personalize designed a sample holder that could withstand that alter in temperature, while also enabling us tilt the sample to scan it from each angle all within a transmission electron microscope,” says Xin. Such potentials are unique to the CFN, a DOE Office of Science and the expert of researchers like Xin to the Entire scientific group through its user program.

The group of Xin tracked accurately where metal ions were reacting with oxygen to form metal oxides and identified that the process takes place in two levels. “In the initial stage, oxidation occurs only when the surface, with metal ions move out of particles to react with the oxygen creating an oxide sheel,” says Xin. “In the latter stage, but, oxidation begins to happen on the inside of the particles as well, suggesting that oxygen moves in.”

The researchers suspected that small pinholes were introduced on the particle’s surface as the oxide shell was creating, providing a pathway for the influx of oxygen. A closer glans at one partially oxidizes particle confirmed this suspicion, revealing that as the oxide gets created on the surface, it beaded up like droplets on a water – repellent surface with small spaces in between.

During early oxidation, cobalt shifted to the external of the particles to engage in the creation of oxide shell. But later stages scans disclosed that the internal layers of the Swiss cheese pores were rich in cobalt as well. “It is of support to our previous idea that oxygen is getting inside and dragging cobalt outside the surface,” says Xin.

Such ability to analyse the surface chemistry of nanoparticles both internally and externally surfaces of pores, could lead to a more rational approach to catalyst design, confirms Xin.