Continue to Site
It is no hidden fact that graphene electrons are highly mobile entities that react swiftly. The fact was well proved recently by a team of researchers working at the Institute of Applied Physics in TU Wien, University of Duisburg-Essen, and Helmholtz-Center Division in UK. The impact of xenon ions over a graphene sheet often leads to higher number of electrons that can be torn away from graphene in a precise manner. But the biggest hurdle is that this substance is capable of replacing electrons within a few femtoseconds that leads to extremely high currents.
As and when the extremely charged electrons moves near the graphene film, it begins to tear the electrons away from graphene sheet because of electric field. The ion is capable of extracting more than 20 electrons from a graphene film. This means, the electrons miss out the graphene layer, thus the surrounding carbon atoms that stand around the point of impact of xenon ion get positively charged. Postdoctoral assistant, Richard William, says, ““You would expect these positively charged carbon ions to repel one another, flying off in what is called a Coulomb explosion and leaving a large gap in the material. But the positive charge in the graphene is neutralised almost instantaneously.” 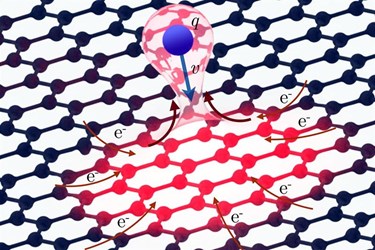 This becomes possible in light of the fact that graphene electrons can be easily replaced within a time frame of few femtoseconds. The PhD students, Elisabeth Gruber, says, “The current density is around 1000 times higher than that which would lead to the destruction of the material under normal circumstances – but over these distances and time scales, graphene can withstand such extreme currents without suffering any damage.” Professor Fritz Aumayr concludes, finally, “The hope is that for this reason, it will be possible to use graphene to build ultra-fast electronics. Graphene also appears to be suited for use in optics, for example in connecting optical and electronic components.”
Filed Under: News