Boron has been identified for the very first time on the Mars surface, indicating the potential for long-term habitable groundwater in the ancient era. Such finding and others NASA’s Curiosity rover science group has been discussed in a conference in San Francisco during the American Geophysical Union Conference.

“No primary mission to Mars has found Boron,” says Patrick Gasda, a postdoctoral scientist at Los Alamos National Laboratory. “If the Boron that we found inside the calcium sulphate mineral veins on Mars is similar to what we witness on Earth, it would indicate that the groundwater of ancient Mars that created such veins would possess 0 to 60 degrees Celsius and 32 to 140 Degrees Fahrenheit and neutral to alkaniepH. “The temperature, pH and other dissolved mineral content of the groundwater could make it habitable.

The Boron was found by the rover’s laser shooting Camera and Chemistry instrument that was introduced at Los Alamos National Laboratory in association with the French Space Agency. The work of Los Alamos on discovery – driven instruments such as ChemCam stems from the Laboratory’s experience operating and building more than 500 spacecraft instruments for national defence.

Boron is popularly associated with arid sites where much water has vanished away; consider of the Borax that mule groups once hauled from Death Valley. But, environmental implications of the Boron identified by Curiosity are still open to discussion. Researchers are considering at least two possibilities for the source of boron that groundwater left in the veins. It could be that the evaporation of part of Gale Lake resulted in boron – comprising deposit in an overlying layer, not yet reached by Curiosity. 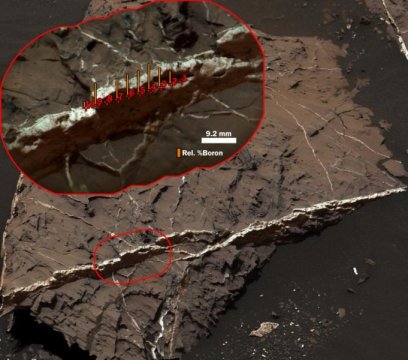 Few of the material from such layer could have later been carried by groundwater down into fractures in the rocks, or perhaps alterations in the chemistry of clay – bearing deposits and groundwater affected how boron was picked and dropped off within the local sediments.

The discovery of Boron is just one of the numerous recent findings related to the composition or Martian rocks. Curiosity is climbing a layered Martian mountain and searching rock composition evidence of how ancient lakes and wet underground climatic changed, billions of years ago, in ways that affected their favourability for microbial life.

As the research of rover progresses uphill, large compositions trend towards more Boron and more clay.These and more other variations can inform us about conditions under which sediments were primarily deposited and about how later groundwater move through the gathered layers transformed and shifted ingredients.

“There are much variations in the composition of distinct elevations, we have hit a jackpot,” says John Grotizinger of Caltech Pasadena, Calif. As the rover moves further uphill, scientists are impressed with the intricateness of the lake environments when clay – bearing sediments were being deposited and also by the intricateness of ground water interactions and after the burying of sediments.