In the previous tutorial, various logic gates and their construction was discussed. In the tutorial – Boolean Logic Operations, it was discussed that how by performing logical operations on binary data, arithmetic operations can be executed. In a digital circuit, many logic gates are interconnected along with registers and memory elements to carry out a complex computation task. Any computational problem can be expressed as a boolean function or boolean expression.

Boolean Algebra was developed by George Boole in the year 1854. In 1904, E. V. Huntington formulated various postulates that must be satisfied by a boolean algebraic system. These postulates are as follow –

3) Commutative – Any boolean expression is commutative with respect to binary addition as well as binary multiplication. Like if there are two boolean variables – x and y, then x + y = y + x. Similarly, x.y = y.x.

6) Inverse – The boolean algebra does not have additive or multiplicative inverse as there are no subtraction and division operations in boolean algebra. Though, any boolean element say x, has a complement x’ such that x + x’ = 1 and x.x’ = 0.

Duality is an important property of boolean algebra. According to this property, any boolean expression, deducible by the postulates of boolean algebra (Huntington Postulates along with associative property), remains same if the operator and identity elements are interchanged. So, dual of a boolean expression can be obtained by interchanging AND and OR operators and replacing all 1’s by 0’s and 0’s by 1’s.

Any boolean expression is deducible by the following theorems –

The operator precedence in descending order in boolean algebra is as follow – 1) Parenthesis, 2) NOT, 3) AND and 4) OR. Any boolean expression is deduced from left to right and the highest precedence is of parenthesis (). Then NOT, AND and the lastly OR operator.

A boolean function is a boolean algebraic expression consisting of boolean variables (where each variable can have a value 0 or 1), boolean constants (that is 0 and 1) and boolean operators (like AND, OR, NOT). Any boolean function practically represents some computation on binary data. For example, let a boolean function say F be like –

Here x, y and z are boolean variables (binary data sources like binary cells from a register) which are related by the AND and OR operators in the above function. All the possible results of a boolean expression can be represented by a truth table. The truth table enlists all the possible combinations of the values of the boolean variables and compare it with the result of the boolean expression. Like for the above stated function, the following is the truth table – 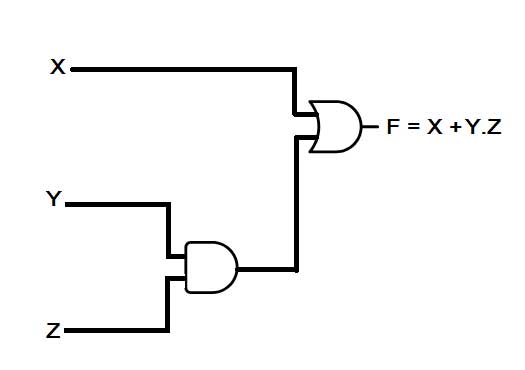 Complement of a Boolean Function –

For two variables, x and y, the following Minterms and Maxterms are possible –

Similarly for three variables say x, y and z, the following Minterms and Maxterms are possible –

Similarly, it can be expressed as product of Maxterms producing 0 for the function in the truth table as follow –

By expressing a function in the form of Minterms and Maxterms, it can have two level implementation in logic gates. The two-level implementation is always preferred as it produces least amount of delay through the gates when signal propagates from input to output of the digital circuit.