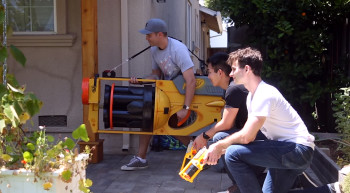 Mark Rober, a known mechanical engineer and an ex-NASA employee says that, “People have these NERF dart wars at work sometimes, so in an effort to keep people from picking on me, I decided to create the world’s largest functional NERF gun.” We understand this topic wouldn’t intrigue everyone but it would be pretty interesting for all others. For this project, Rober worked with David and Ryan from Eclectical Engineering and together the three started creating a large sized NERF gun.

The shell of this gun is a 3D-rpinted on, its chambers, on the other hand, are derived from off-the=shelf ABS pipes. The gun utilizes a 3000-psi paintball tank for releasing compressed air in the firing tank whenever the user pushed the trigger forward. When the trigger is pulled back, a gush of compressed air rushes into central cylinder and what can be called as juvenile humor, shoots a large sized pool noodle dart. It is capped by toilet plunger and moved with a dash towards the target.

The firing tank employed in this gun gets regulated for 80 psi which gives user around 20 shots from the paintball tank. When this is combined with the rotating chamber of the gun, this can create barrage of plunder darts that will come to your way at a speed of 40mph. The best part was when they tested the gun. The demonstration of its abilities started with a normal toy-sized version that took targets at various corners. Then came the monster edition that took everyone by surprise.

Once they were done with testing of customary NERF darts, the team went on to build an aerodynamic projectile through 3D printing. The new gun was able to take an aim up to 130ft. A few other modifications were made to improvise the future version of this gun. You can check out all details of this project here: https://youtu.be/rKGUh7gLKAU