Continue to Site
Engineers have introduced the very first flexible wearable gadget that is efficient of monitoring both electric and biochemical signals in the human body. It is Chem-Physics patch that accounts electrocardiogram heart signs and analyzes the levels of lactate. The biochemical acts as a symbol of physical work, in real time. This device is wearable on the chest and communicates wirelessly via the smartwatch, smartphone or laptop.
A group of Engineers at the University of California, San Diego have introduced the very first flexible wearable gadget that could be applied to an array of applications, like athletes monitoring, analyzing patients with heart diseases and more.
The product is a result of combined efforts of electrical engineers and Nanoengineers for wearable sensors at the UC San Diego Center. They developed a device that incorporates a flexible set of sensors and a minute electronic board. The device is also capable of transmitting the data from electrical and biochemical signals via Bluetooth. 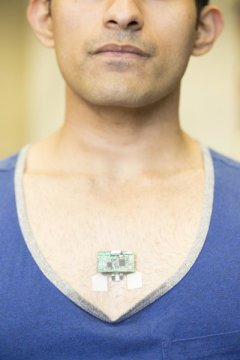 The project was led by Nanoengineering professor Joseph Wang and electrical engineer professor Patrick Mercier at the UC San Diego Jacobs School of Engineering. The Wang’s team worked on the chemistry and patch’s sensors while the Mercier’s group worked on data transmission and electronic signals.
“One of the predominant aims of our research is to create a wearable tricorder unit that can measure altogether a whole collection of physical, electrophysiological and chemical signals regularly throughout the day,” said Mercier. “Our research work is a vital step towards showcasing that even this is also possible.”
There are various commercial wearable available that measure only one signal, like the heart rate or steps walked and more. There is not a single of them, till date, that possesses the ability to measure chemical signals, like lactate. That is the limitation that the researchers and engineers at the Jacobs School of Engineering have attempted to combat. This device is the first in the field of wearable sensors that can be functional for athletes who intend to boost their performance. Both Wang and Mercier have been retrieving inquiries from the Olympic athletes on how such technologies are being produced.
As detailed out by Dr. Kevin Patrick, a leading physician, and director of the Center for Wireless and Population Health Systems at UC San Diego, “The ability to identify both lactate and EKG in a tiny wearable sensor can deliver benefits in multiple areas. It would be supportive in the sports medicine community about how this form of sensing could aid in optimizing the training processes for elite athletes. Also, the capability to concurrently analyze lactate and EKG can open up new avenues in preventing and managing individuals suffering from mild to severe cardiovascular disease.”
The biggest challenge encountered by researchers was to make sure that signals from two varying sensors do not interfere with each other. It required a vigilant engineering and a fair amount of experimentation before identifying the precise configuration for the sensors.
Conclusion – Further attempts are being made by the team to enhance the way board and patch are linked and incorporating sensors for other types of chemical markers, like potassium and magnesium. Awaited are the results to see when data from two signals will correlate.
Filed Under: News