Sun, wind, as well as other renewable energy resources can really make up for a larger part of electricity consumed by United States in coming times. The only catch is to manufacture better batteries that can store intermittent energy for foggy, cloudy, or windless days. A new kind of material can now store larger quantities of renewable energy adding more resilience and reliability to a nation’s power system. A paper published in a famous journal recently spoke of an electrode made from liquid metal alloy that can enable sodium-beta batteries that have higher life cycle and can really help in optimization of manufacturing process and bring down the risk of accidental fires.

Xiaochuan Lu, a material scientist from Pacific Northwest National Laboratory’s Department of Energy, says, “Running at lower temperatures can make a big difference for sodium-beta batteries and may enable batteries to store more renewable energy and strengthen the power grid.” Currently Europe, Japan, and United States have large, cargo container sized sodium-beta batteries that have potential of 300 megawatts. These often store power generated by solar panels and wind turbines rows. The broader usage of these has, however, been limited due to their high operating temperatures. The normal working temperature required by these batteries is 350 degree Celsius which is almost three times of what is required to boil water. 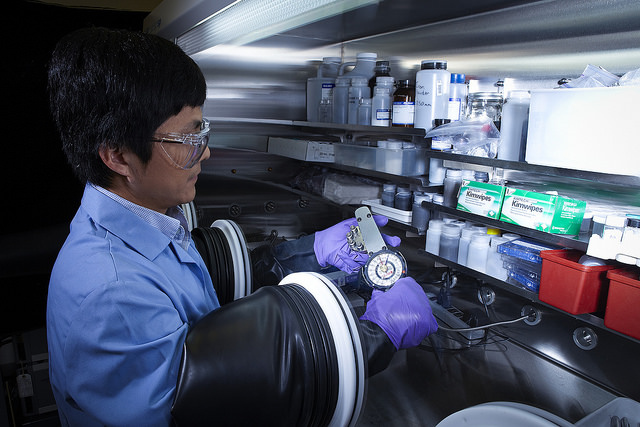 Such high level operating temperatures need sodium-beta batteries to make use of more costly materials that shorten up the total operating lifespan. PNNL researchers aimed to bring down the temperature needed by these batteries to operate, knowing these could play a key role in increasing the efficiency and endurance of batteries.There are basically two kinds of sodium-beat batteries on the basis of material that are used for positive electrode that make use of sulfur and are called sulfur batteries while the ones that use nickel chloride get known as ZEBRA batteries. Bringing down of operational temperature forms several other technical problems and the first one is fully coating of negative sodium electrode or its “wetting”. It reduces the efficiency of battery. The team took a new approach to the wettability problem by modifying the negative electrode. They experimented with sodium alloys in place of pure sodium. This solved the problem to quite an extent. So, the batteries can now operate at 150 degrees in place of 360 degrees
Filed Under: News