Sensors are very important organs of any measurement system.  They collect data from the surroundings/ physical parameter and provide electrical signal as the input to the systems. Amongst wide variety of sensors operating on different sensing principles and used in different applications, position sensors play an important role in different systems. Whether it is fly-by-wire aircraft systems, drive-by-wire cars, bullet trains taking round curves, injection molding machines, packaging machines, medical equipments, and so on, position sensors finds their applications, of course in different ways.

Fig. 2: Configuring Capacitive Position Sensor by Changing Dielectric Constant
This principle is commonly used in level position sensors wherein two concentric tubes are used and fluid acts as the dielectric. The variation in capacitance with the fluid level is linear.
2.      By changing overlapping area
In this configuration, the body or its part whose displacement is to be measured is connected to one of the plates, the other plate remains fixed. With the movement of the body, overlapping area between the plates changes. The changing overlapping area between the plates leads to change in capacitance between the plates. Thus, capacitance becomes a function of the body position.
This principle can be employed for both linear as well as angular motions.

Fig. 3: Configuring Capacitive Position Sensor by Altering Overlapping Area
LINEAR VOLTAGE DIFFERENTIAL TRANSFORMER
Linear Variable Differential Transformer commonly known by its acronym, LVDT is an electromechanical transducer which converts rectilinear motion of an object into a corresponding electrical signal. It is used for measuring movements ranging from microns upto several inches.
LVDT  consists of a primary winding and a pair secondary windings. Primary winding is sandwiched between the secondary windings. Secondary windings are symmetrically spaced about the primary and are identically wound. The coils are wound on a hollow form of glass reinforced polymer and then secured in a cylindrical stainless steel housing.  The windings form the stationary part of the sensor.
The moving element of an LVDT is called the core made of highly permeable magnetic material; the core moves freely axially in the coil’s hollow bore. The core is mechanically coupled to the object whose displacement is to be measured. 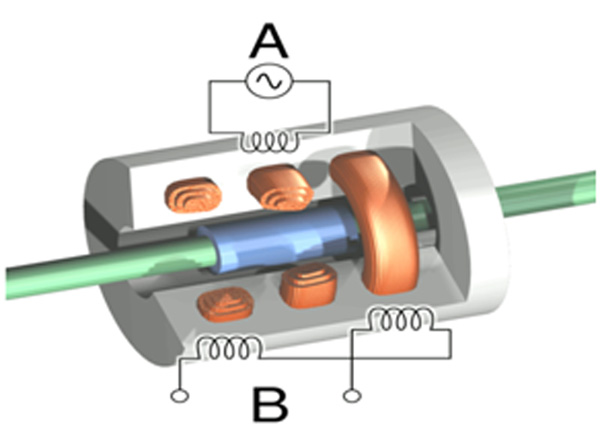 MAGNETOSTRICTIVE LINEAR POSITION SENSORS
Magnetostriction refers to the effect wherein a material changes its size or shape in the presence of the magnetic field the material due to the alignment of the magnetic domains, within the material, with the applied magnetic field. Materials having such properties are ferromagnetic materials such as iron, nickel and cobalt. Reverse effect, i.e. property of changing magnetic properties due to applied stress, is called Villari effect. 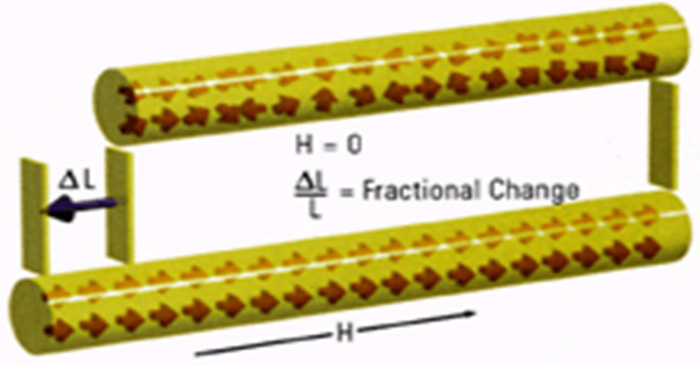 Fig. 7: Graphic Image Showing Insides of a Magnetostrictive Position Sensor
An interrogation(or current) pulse is sent down the waveguide from the electronics module. At the location of position magnet, magnetic field generated by the current pulse interacts with the magnetic field from the position magnet. The result is the generation of sonic wave or torsional strain wave in the waveguide. The strain wave travels towards the head end where the pickup device senses its arrival. Strain wave  travelling away from the head end is removed by the damping module.

Fig. 8: Image of an Eddy Current Based Position Sensor
Time difference between the generation of the interrogation pulse and the arrival of the return pulse(strain wave) indicates the location of the position magnet(or the body connected to it)

Eddy Current based position Sensor
Eddy Currents are closed loops of induced current circulating in planes perpendicular to the magnetic flux. They normally travel parallel to the coil’s winding and the flow is limited to the area of the inducing magnetic field. 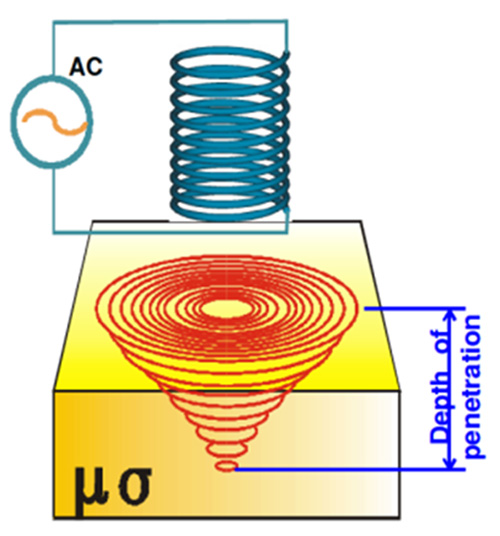 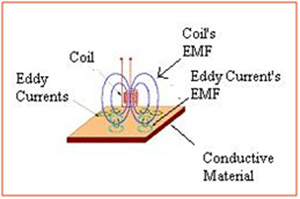 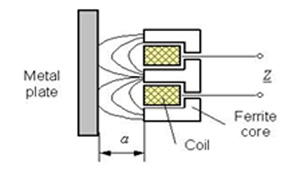 Fig. 11: Diagram showing Change of Coil Impedance as a Function of Distance in Eddy Currents 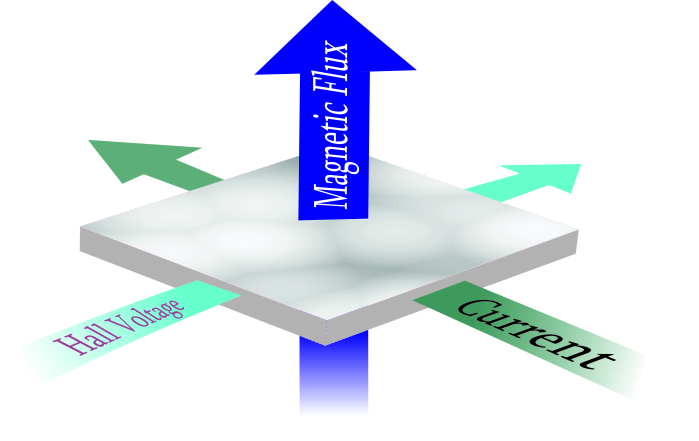 The Hall Effect principle states that when a current carrying conductor is placed in a magnetic field, a voltage will be generated perpendicular to the direction of the field and the flow of current.
When a constant current is passed through a thin sheet of semiconducting material,  there is no potential difference at the output contacts if the magnetic field is zero. However, when a perpendicular magnetic field is present, the current flow is distorted. The uneven distribution of electron density creates a potential difference across the output terminals. This voltage is called the Hall voltage. If the input current is held constant the Hall voltage will be directly proportional to the strength of the magnetic field.

In position sensors which use hall efffect, the moving part is connected to a magnet.Thus, the sensor consists of a Hall element and a magnet housed within the sensor shaft. With the movement of the body or its part the magnet also moves and therefore, the magnetic field across the Hall element and so the Hall voltage. Thus Hall voltage becomes a function of the position of the moving part.
Commercially available Hall elements are made of Bulk Indium Arsenide (InAs), Thin Film InAs, Gallium  Arsenide (GaAs), Indium Antimonide (InSb).
Fiber-Optic Position Sensor
Optical fibers offer distinct advantages of their immunity to EMI, inability to generate sparks in potentially explosive environment. Position sensors based on optical fibers can be used for measurement ranging from few centimeters to few meters where very high resolution is not of paramount importance.
Fluorescence followed by absorption is at the heart of this sensor. Pump source is connected to the body or its part whose motion is to be sensed. The fiber is fluorescent, and at the ends of the fiber are placed two photo-detectors.

Fig. 14: Diagram Showing Working of a Optical Fiber Based Position Sensor
The logarithm of the ratio of the two signals S1 and S2 is linear in x and independent of the strength of the pump source.

Optical Position Sensor
Optical sensors are based one of the two mechanisms. In first type, light is transmitted from one end and received at the other. Change in one of the characteristics- intensity, wavelength, polarization or phase- by the physical parameter is monitored. In second type, transmitted light is reflected from the object and light returned towards the source is monitored.
First type of optical sensors are used in optical encoders commonly  used to provide feedback to provide position feedback for actuators. Optical encoders consists of a glass or plastic disc that rotates between a light source(LED) and light receiver(photodetector). The disc is encoded with alternate light and dark sectors so that pulses are generated as the disc rotates.  Based on the count of the pulses, speed of the disc and hence the angular position is computed. To identify the direction of movement, two photodetectors are used. Absolute optical encoders have a unique code that can be detected for every angular position.
An example of second types of sensors is found on machine tools measure the position of the work table is measured and displayed.

Fig. 15: Image Showing an Application of Position Sensor used in Machine Tools
The strip or disc has very fine lines engraved on it which interrupt the beam. The number of interruptions is counted electronically and this represents the position or angle.

Potentiometers are often the cheapest option for position sensing, but needs physical contact with the moving target. Hall sensors are also cheap but are used in ON/OFF type of applications. It is effective only for applications where detailed position information is not required. Optical sensors have very fast response as they are non-contact type, light in weight and don’t need to counter friction. Accuracy is governed by the number of counts. More the counts, better is the accuracy. However, proper alignment and protection from harshy or dust environment is necessary. They are relatively costly. Eddy current based position sensors are moderately priced but are not preferred in applications requiring highly detailed positioning information or where large gaps exist between the sensor and the target. These can tolerate dirty environments and are good when mounted on stationary mechanical structure. LVDTs or RVDTs are priced highly but can tolerate dirty or harsh environments. They offer high accuracy, high precision as well as high sensitivity. They find applications in industrial and aerospace applications.