Continue to Site
The French car maker, Renault recently brought forth Trezor – an electric Grand Tourer concept car that closely follows the footprints of 2010 released DeZir concept car. The car features a carbon framework and body with blazing red paint and complementing surface finishes. The hood greets you with a honeycomb-shaped air intake designed especially to offer a variable-geometry intake. Over the left side, the fuel filler hatch gets replaced with an analogue gauge capable of signalling the charge level of the vehicle. 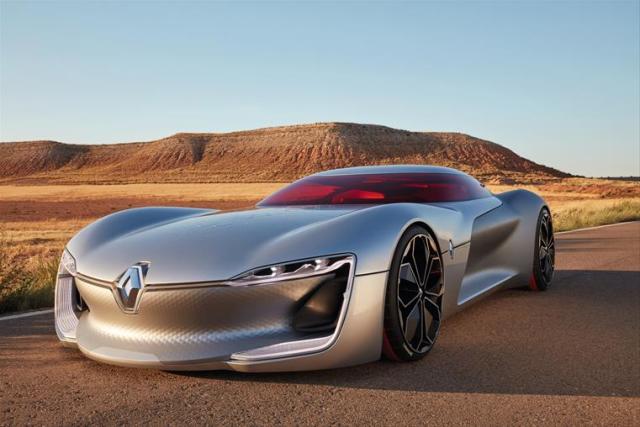 The Trezor also sports a one-piece clamshell roof that gives access to interiors upon lifting. The height of this car is approx.1080mm and its accommodators need to straddle the side profile of the car as they get in this throwbacks styled luxurious racing car. The dashboard of this car is constituted by superimposed thin strips derived from ash. The French automotive brand claims that the strength of this material is equivalent to all modern day composite materials. The interiors of this car have been blessed with two touchscreen displays placed on either side of stalk controls.
Under the hood, the car is capable of yielding a maximum power of 260kW against the supreme torque of 380Nm. It is capable of rushing from 0-62mph in less than 4 seconds. It has two batteries each one of which comes with its own cooling systems that are optimized with variable geometry air intakes. The car also comes with a brake-operated energy recovery system, bestowed by the Rechargeable Energy Storage System (RESS) technology brought forth by Formula E racing. The batteries have been separated from each other, the first one is positioned on the front end while the other one is placed at the rear end. This supports an optimal weight distribution in the car.The wide tracks of its tires and long wheelbase have been designed especially to improve its grip on roads.  It has a ground clearance of 25cm and a drag coefficient of 0.22.its weight has also been kept in check to improve the overall performance of car along with its battery range.
Filed Under: News