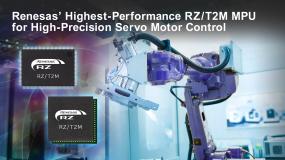 “There is growing demand for factory automation and the deployment of industrial robots to boost productivity,” said Toshihide Tsuboi, VP of Industrial Automation Business Division at Renesas. “The RZ/T2M is capable of controlling the servo motors that drive robots at extremely high speed and with high precision. I anticipate that it will contribute to the development and widespread adoption of sophisticated industrial robots that can work safely alongside humans.”

Real-time control
The RZ/T2M is built around two Arm Cortex-R52 cores with a maximum operating frequency of 800 MHz. Connecting the peripheral functions used for motor control to a dedicated bus-linked directly to the CPU enables the CPU to access these functions with low latency.

In addition, the large memory capacity (576 KB) is tightly coupled with the CPU, reducing the fluctuation in execution time that can occur when cache memory is used and delivering deterministic, fast-response processing. These advantages enable the RZ/T2M to deliver rapid and highly precise control for applications that require high performance such as AC servos, inverters, and industrial robots.

In addition to major industrial networking protocols such as EtherCAT, PROFINET RT, and EtherNet/IP, Renesas has added support for the PROFINET IRT protocol in the RZ/T2M. The new MPU also includes an Ethernet switch that supports the next-generation, time-sensitive networking (TSN) standard, allowing multiple devices to operate in precise synchronization.

In addition, later this year Renesas plans to release functional safety solutions, including a SIL3-certified software kit combination that includes a self-test software kit enabling failure self-diagnosis by the RZ/T2M, and a SIL3 system software kit for mutual diagnosis and software isolation functionality. The IAR Embedded Workbench for Arm Functional Safety Edition, an integrated development environment certified for functional safety-related development and an essential tool for deploying the above software, will support the new RZ/T2M processors.

“Functional safety continues to be an important requirement for many of our customers,” said Anders Holmberg, CTO at IAR Systems. “Companies choosing the new Renesas’ RZ/T2M in their next design can be sure that IAR Systems will support them with certified development tools and professional technical support globally, substantially reducing both design time and project cost.”