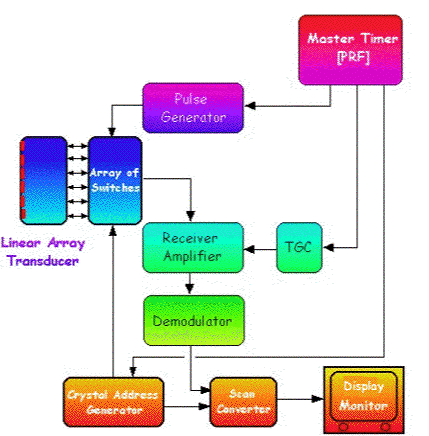 Images from the sonographic scanner can be displayed, captured, and broadcast through a computer using a frame grabber to capture and digitize the analog video signal. The captured signal can then be post-processed on the computer itself.
Therapeutic applications
Therapeutic applications use ultrasound to bring heat or agitation into the body. Therefore much higher energies are used than in diagnostic ultrasound. Ultrasound sources may be used to generate regional heating and mechanical changes in biological tissue, e.g. in occupational therapy, physical therapy and cancer treatment. Focused ultrasound may be used to generate highly localized heating to treat cysts and tumors . This is known as Focused Ultrasound Surgery or High Intensity Focused Ultrasound . These procedures generally use lower frequencies than medical diagnostic ultrasound from 250 kHz to 2000 kHz, but significantly higher energies. Focused ultrasound may be used to break up kidney stones by lithotripsy. Ultrasound may be used for cataract treatment by phacoemulsification.
Obstetric Ultrasound Scanning
Obstetric Ultrasound is the use of ultrasound scans in pregnancy. Since its introduction in the late 1950’s ultrasonography has become a very useful diagnostic tool in Obstetrics. Currently used equipments are known as real-time scanners, with which a continuous picture of the moving fetus can be depicted on a monitor screen. Very high frequency sound waves of between 3.5 to 7.0 megahertz (i.e. 3.5 to 7 million cycles per second) are generally used for this purpose.
They are emitted from a transducer which is placed in contact with the maternal abdomen, and is moved to “look at” (likened to a light shined from a torch) any particular content of the uterus. Repetitive arrays of ultrasound beams scan the fetus in thin slices and are reflected back onto the same transducer.
The information obtained from different reflections are recomposed back into a picture on the monitor screen (a sonogram, or ultra sonogram). Movements such as fetal heart beat and malformations in the fetus can be assessed and measurements can be made accurately on the images displayed on the screen. Such measurements form the cornerstone in the assessment of gestational age, size and growth in the fetus.
Filed Under: Electronic Projects