Andy Jenkinson recently came up an innovative concept where he connected his iPhone and iPad with some other speakers as well as administered synchronized music in multi-room with iPad/iPhone without depending on any mobile device. To perform this task he used one or two Raspberry Pi computers that had compatibility with Apple TV or Airport Express, some powered speakers connected with 3.5mm analog stereo jack of Pi, an Ethernet connection or wi-fi adapter that worked with Raspbian as Edimax EW-7811 UN, and Mac/Windows computers that played either iTunes or a Linux computer along with Apple’s Remote app in an iPhone/iPad.

A tech-enthusiast by nature, he feels that the first step in this process is setting up of server which is not very difficult if you have little idea about computer networking. The server that he used for this purpose was the one where he used to keep all his music. He basically used DAAP protocol to offer information regarding his music library to the iDevice. It could be easily administrated with an iDevice for transmitting music to AirPlay speakers. He adds that one can also use their Mac as well as PC as the server by just opening iTunes. For this purpose, even a low cost computer with Linux and DAAP software can be highly useful. He used an HP MicroServer personally, however, you will notice that a number of NAS devices run fork-daapd as well as Synology NAS equipment that are accompanied by distinct functionality in their DSM software.

Installation of forked-daapd system might be a little tricky and one might need to follow the instructions from the author’s site. The next step is to put up AirPlay speaker setup. The best way to do this is the combination of Apple TV devices with Apple’s owned AirPort Express. One can also use set of speakers compatible with AirPlay. The process for making AirPlay speaker through Raspberry Pi shairport-sync begins with installation of Raspian then updating the Pi to latest version, setting up WiFi, logging in via SSH, installing AirPlay software, configuring it, and rebooting the system to finish the procedure. 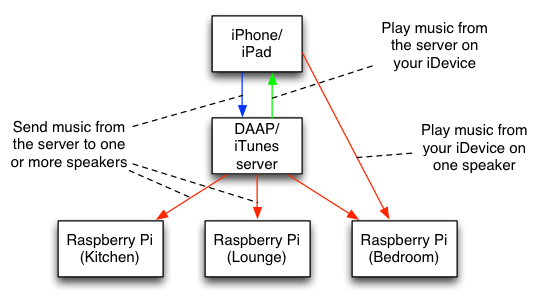 Once the AirPlay Pi is up and working, it can easily be tested by sending some music through iPad/iPhone. In case of iOS7 or 8, the user will need to swipe up from bottom of display screen which will shoot the AirPlay option on the screen. When Pi is selected by tapping it, sound from any music supporting app will be played in Pi’s speakers in place of the iPhone. Similarly, music can be plated from server to speaker and vice versa. He further adds that home sharing can replace a previous mechanism of doing things, however, much will depend on your Apple ID which may or may not sync with forked-daapd. Therefore, if you are employing a Linux server you might need to utilize some other app such as Simple Daap Client.