The Actuator Sensor Interface is a standard Fieldbus interface for connecting binary actuators and sensors in a PLC, DCS, or PC-based automation system. It is the only worldwide standardized bit-oriented Fieldbus. Traditionally, actuators and sensors were connected to a PLC controller or other controller using parallel wiring. The complex nest of wires was hard to install, maintain, and troubleshoot. Parallel wiring was also quite expensive. Then, in the late 1980s and early 1990s, the AS-i was developed by Siemens in partnership with ten other companies as a serial interface for low-level actuators and sensors. The interface provides industrial networking for the lowest process level in automation systems.

AS-i simplifies networking sensors and actuators by reducing the network to two wires. The same wires are used to power the input/output devices i.e. the sensors and actuators. It connects binary sensors and actuators that are simple on/off devices. The AS-i networks can be connected to higher-level networks like PROFIBUS, DeviceNet, and Industrial Ethernet. The interface allows connecting 31 or 62 slave devices within 100 meters. The range can be extended up to 300 meters using repeaters. The Fieldbus even allows communication of analog data. With a flexible topology, the interface also provides a safety functionality called “AS-i Safety at Work”. There is no doubt why this serial interface has become the de facto standard for simple input/output networking in automation.

What is an actuator sensor interface?
Actuator Sensor Interface is a standard bit-oriented field bus connecting binary sensors and actuators at the lowest process level in automation. It connects simple nodes like pushbuttons, limit switches, process valves, solenoids, relays, indicators, and on-off devices with PLC or another controller. The interface has allowed replacing complex cable harness entirely with an AS-i cable, which is a simple non-shielded non-twisted 2-wire cable. The cable enables transferring of standard and safety-oriented data on the same line. Also, low-power sensors and actuators can be powered by the same cable. In most automation sites, AS-i is now the de facto networking solution for the first level of automation due to its simplicity, low cost, flexibility, and safety features.

Why AS-i?
In industrial automation, the low-level sensors and actuators are the bulk of devices that must first be installed and set up. These simple command devices are the majority of the network. Their installation, maintenance, and troubleshooting are the most tedious work for automation engineers. If the majority of devices are connected to the PLC controller by discrete cables, sorting out the mesh is the most frustrating thing. AS-i not just simplifies cabling but it provides a standard networking protocol for communicating with the majority of I/O devices on the field.

The AS-i interface simplifies cabling at low-level automation and minimizes assembly cost. The field bus can be installed in various topologies like bus, star, ring, daisy chain, tree, etc. AS-i is flexible and fast to install and set up with fewer components. This is the safest, simplest, and fastest connectivity solution on the field.

The only components required to set up the Fieldbus are the AS-i master, AS-i interface, and AS-i yellow cable. There is no need for T-pieces or pre-assembled cables to connect the devices. The I/O devices need to be simply screwed to a single 2-core yellow cable, and that’s it. The modules (AS-i interfaces) connecting the devices with the cable simply pierce the rubber insulation of the cable and establish secure contact with each of the two cable wires via two gold-plated needles respectively. Among all available low-level replacement networks, AS-i is the most cost-effective option with the greatest performance and safety. It has almost no assembly cost and no chance of installation error. Being non-twisted, there is no need for striping or terminating the cable.

The same cable allows communication of standard data and safety-oriented data, and at the same time, it also supplies power to the devices. AS-i is the only low-level Fieldbus compatible with all other higher-level Fieldbus systems, including PROFIBUS, Industrial Ethernet, PROFINET, DeviceNet, CC-Link, etc. The latest standard even allows interfacing intelligent sensors like IO-Link. While AS-i 3.0 allowed connecting only simple command (On/Off) devices with the PLC controller, the latest AS-i 5.0 standard allows communicating larger data volume at higher rates.

AS-I standard
The interface was developed by Siemens and some other companies in the 1990s. From its very conception, AS-i was developed as an open technology. Soon after its development, a member-based organization called AS International Association was formed for standardization and further development of the protocol. The technology complies with global standard IEC 62026-2:2015 and local standards, including EN 50295 (Europe), GB/T18858.2 (China), JIS C 82026-2 (Japan), and KS C IEC 62026-2 (South Korea).

AS-i components
The AS-i compatible low-level sensors and actuators are available from hundreds of automation vendors. There are already millions of AS-i field devices installed and operational worldwide. These simple-command input/output devices include inductive proximity switches, pushbuttons, process valves, variable speed 3-phase motors, keyboards, limit switches, indicators, light barriers, and many other On/Off devices. The devices can be connected in an automation field in any selectable topology. There are three main components of an AS-i.

The field devices may be directly connected to a PLC controller through the AS interface master in the PLC rack or connect to a higher-level Fieldbus like PROFIBUS or DeviceNet again through the AS-i master only.

Due to fixed-length messages and cyclic polling methods, the time required for communication between the master and the slave devices is always predictable. This enables switching the device with a calculated accuracy. All the field devices are recognized on the interface by the master only through the addressing mode. There is no need to configure the master or the slave or set up any configuration parameters across the interface. The Combi field devices like text display modules, pressure sensors, slow analog sensors, and counter modules communicate over the interface via the serial protocol. The typical data rate on the AS-i interface is 167 Kbps. That means it takes 6 microseconds to communicate each bit.

AS-i bus line modulation
The data transmitted on the AS-i interface exists in non-return to zero forms. It is encoded using Manchester format. The Manchester encoded line currents are then differentiated to alternating pulse modulation (APM). The AMP signals are ac coupled to the line and superimposed on +/-2V DC level. 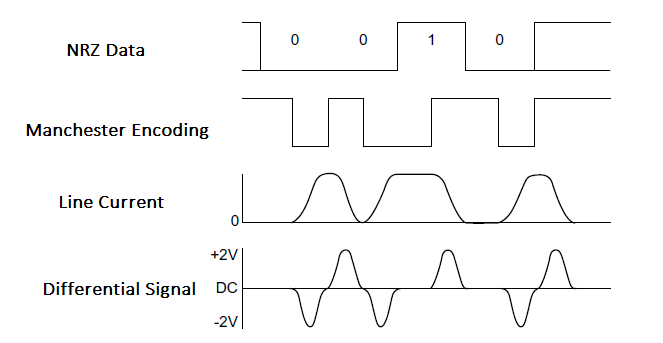 On the receiver side, positive and negative pulses are recovered and reconstructed to the original data.

AS-i protocol
The AS-i mater poll each field device by a sequence. The master and slave have a maximum of 5ms or 10ms to exchange messages depending upon the addressing mode of the AS-i slave. When polling a slave, the master communicates a 14-bit call to the slave device. The 14-bit frame consists of 1 start bit (MSB), one control bit, 5-bit address, 5-bit command or data, one parity bit, and one end bit (LSB). The slave devices respond by transmitting a 7-bit frame, which consists of 1 start bit (MSB), 4-bit data requested by the master, one parity bit, and one stop bit (LSB).

AS-i safety at work
The AS-i can also connect work-safety components like emergency stop pushbuttons, laser scanners, safety light barriers, and door contacts. This feature is called “AS-i Safety at Work”. The typical AS-i remains unchanged upon adding the feature. The function is enabled by simply adding a safety monitor and safety slaves to the AS-i. The interface is then allowed to transfer both standard and safety-oriented data from the safety slaves to the safety monitor. The setup works even without fail-safe PLC or any specialized AS-i masters.

ASI-safe is a TUV-certified system up to Safety Integrity Level 3 (SIL 3). This is an excellent way of adding safety to the automation environment at no additional cost.

Applications of AS-i
AS-i is a global standard. It has been widely adopted worldwide for networking binary actuators and sensors for factory automation, industrial process control, and building automation.

Filed Under: What Is