The special sensors are used to detect and record human gestures and movements. One of such sensor widely used for detecting hand gestures, especially using fingers, is the flex sensor. Flex sensor is, as a name suggest, it’s a flexible 2 to 4-inch long strip. Actually, its variable resistance device and its resistance vary as it is bent. In the normal condition when it is straight its resistance is fixed. When it is bent on either side, its resistance varies. So this property of flex sensor is used to detect gestures. Mostly flex sensors are attached to fingers, so as fingers are bent the sensors will also bend and their resistance will change. That is detected as finger movements and gestures. 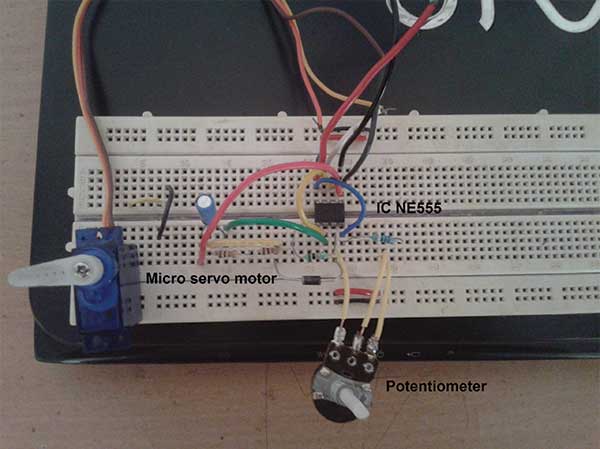 As shown in figure -:

1. Flex sensor is connected to analog input pin A0 in pull up configuration with pull-up resistor of 10 K

3. Arduino board is connected to the computer with USB cable for programming as well as serial communication.

• When flex sensor is straight its resistance is low. It gives corresponding analog voltage input to pin A0.

• The Arduino will convert this analog voltage into a digital value and depending upon it, it will generate PWM signal on analog output pin 3 to rotate the servo motor to desire angle.

• The corresponding digital value will also increase and this will increase the width of output pulse at pin 3 to increase rotation angle of the servo motor.

• The servo motor rotation angle increases that is displayed on the serial monitor along with flex sensor bending value.

• When flex sensor is completely bent its resistance will be maximum and it gives max analog input. Its corresponding digital value is displayed on the serial monitor.

• The servo motor attains max angle that is 180o.

• The flex sensor min and max bending values are calibrated and mapped to min and max servo motor rotation angle as 0o to 180o.