In a processor/controller/ASIC, the arithmetic operations on integer binary numbers are performed by  Arithmetic Logic Unit (ALU) while arithmetic operations on floating point numbers are performed by Floating Point Unit (FPU). A Floating Point Unit itself is built from multiple ALUs. Within a Central Processing Unit (CPU) or Graphics Processing Unit (GPU) of a computer/computing device, there are many ALU and/or FPU (where FPU themselves are built from multiple ALU).

1) Arithmetic Operations – Generally, the arithmetic operations supported by the ALU are addition, addition with carry, subtraction, subtraction with borrow, two’s complement, increment, decrement and pass through.

2) Bitwise Logical Operations –  The logical operations supported by the ALU are AND, OR, Exclusive-OR and One’s Complement.

So, ALU can perform arithmetic operations like addition and subtraction, and so multiplication and division on integer binary numbers. A binary number may be available to the ALU of a digital processor either as parallel 8-bit, 16-bit, 32-bit or 64-bit input depending upon if it is 8-bit, 16-bit, 32-bit or 64-bit processor. The basic building blocks of the ALU are adders. The adder circuits are built by logic gates and flip-flops. The semiconductor adder circuits can perform addition in a time less than 1 microseconds.

Fig. 1: Truth Table of Half Adder

Fig. 2: Symbol and Logic Gate Diagram of Half Adder

A half adder has only two inputs and there is no provision to add a carry coming from the lower order bits when multiple bit addition is performed. For this purpose full adder is designed. A full adder is designed to perform the arithmetic sum of three input bits and produces a sum output and a carry. The truth table for a full adder is as follow – 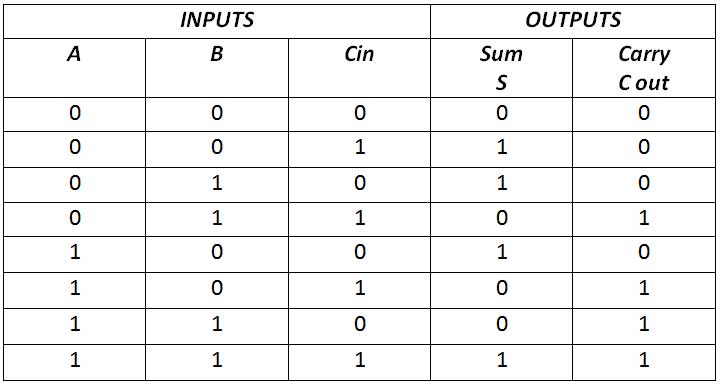 From the truth table, it must be clear that the full adder has three inputs and two outputs. The two input variables are denoted by A and B, which represents the two significant bits to be added. The third input Cin represents the carry from the previous low significant position. The outputs aresum (S) and Carry (C). From the truth table, it can be seen that Sum is 1 if either input is 1 or all inputs are 1. This can be implemented by exclusive-OR of all the inputs. The carry is 1 when either two inputs are 1 or all inputs are 1. This can be implemented as sum of product expression of all the inputs. So, the full adder has the following circuit –

It can be noted that full adder is formed by two half adder circuits and an OR gate.

Fig. 5: Truth Table of Half Subtractor

From the truth table, it can be seen that the difference D is 1 if either input is 1 else if both inputs are 1 or 0, the D is 0. This can be implemented by connecting the inputs to an exclusive OR gate. The Borrow Out (Bout) is 1 only if Y is 1 but not X. The borrow output Bout is 1 whenever X is lesser than Y, then the subtraction is done by borrowing 1 from the next higher order bit. This can be implemented by AND operation between Y and NOT of X. So, the half subtractor has the following circuit –

Fig. 6: Symbol and Logic Gate Diagram of Half Subtractor

A full subtractor is designed to perform subtraction involving three bits, namely minuend bit, subtrahend bit and borrow from previous stage. In full subtractor, it has three inputs X, Y and Bin, and two outputs Difference (D) and Borrow (Bout). It has the following truth table – 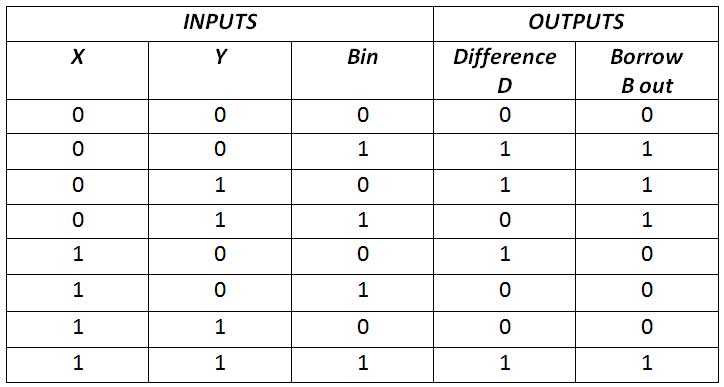 The Full Adder is capable of adding only two single digit binary number along with a carry input. Practically, there is need to add binary numbers which are much longer than just one bit. To add two n-bit binary numbers there need to use the n-bit parallel adder. It uses a number of full adders in cascade. The carry output of the previous full adder is connected to carry input of the next full adder.

The subtraction can be carried out by taking the 1’s or 2’s complement of the number to be subtracted. For example, the subtraction (A-B) can be performed by adding either 1’s or 2’s complement of B to A. So, a binary adder can be used to perform the binary subtraction. Just as a parallel binary adder can be implemented by cascading several full adders, a parallel binary subtractor can also be implemented by cascading several full subtractors.

In the next tutorial, learn about gate level minimization and logic gate implementation of the arithmetic circuits discussed above.