Fujitsu recently announced its plans to make a prototype wireless unit that includes an inter-subarray coding technology. It would open up ways for transmitting data at a speed exceeding 10Gbit/s, the power consumptions for the same will fall in level with Wi-Fi. To accomplish this task, all efforts and research in this direction has been focused on hybrid beamforming that incorporates millimeters waveband and multiple antenna elements that communicate signals constantly as the beams are transmitted to specific devices. 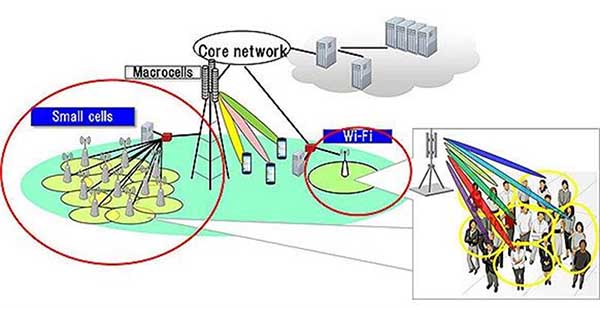 The only problem with this method is that when signals are sent from multiple devices interference is experienced. This leads to reduction in transmission rates. Fujitsu team discovered that with the help of interleaved structure, a special kind of hybrid beamforming method, interference between the beams can be canceled out easily. An interleaved type of device, the space between antenna elements increases within one subarray, this increases the subarray’s area.

As and when the range of antenna spreads out, the beam gets narrower, and as the antenna elements start spreading out also takes place. If these elements are placed in an alternate manner, the signals from both subarrays A & B can be sent in form of radio waves from A & B in both directions. Signal A will be sent in both directions in the same phase, the positional relationship between antenna elements will cause change in radio wave phase for the signal B as per the direction. With the help of this feature,the interference is cancelled outby appropriate coding of signal. Fujitsu claims that it will help in communication at high rates in most busy areas by multiple users.