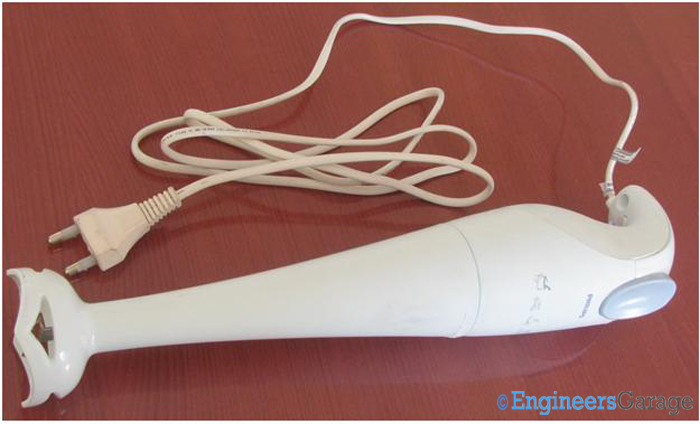 Yes. This week’s Insight is a Hand Blender. On the last Saturday morning, after a full night’s work at the EG Labs, the whole Engineering Garage team gathered to make smoothies and sandwiches before retiring to bed at dawn (BTW, the Garage has enough space and equipments to be used as a kitchen, a rest house and ahighly charged PS-3 arena during weekends), andone of our team members screwed the Hand Blender open. Thus, the Insight.

Hand blenders were first invented by the Swiss and were straightaway recognized as a good time saver: a solution for instant food meshing, mixing, whipping and all the mishy-mashy things they do in kitchen.

It is easy to guess that this light weight, a foot tall gadget houses a motor, a PCB and some (optional) accessories that would allow speed control and indicative light options etc. BUT: exactly what kind of motor does a simple blender have? How can it tolerate the forces generated by a motor, its body being made of plastic? Can its motor have different configurations? Let’s find out what the nerds in our team have discovered by reverse engineering a Phillips HR1350 hand blender while sleepwalking.

Image 02 shows the external structure of the Philips HR1350 Hand Blender. The external body is made of polypropylene which is known for high temperature resistance and excellent mechanical properties. Also, being an insulator, propylene protects the users from electric shock.

The structure of a blender can be split into two parts: 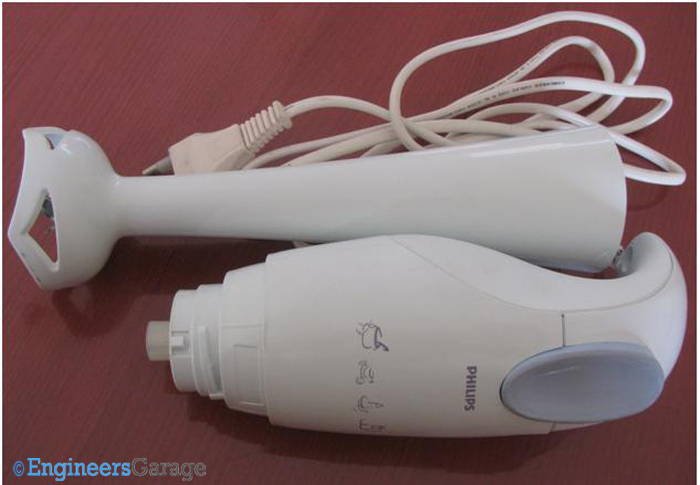 Mixing, whipping, mincing and of course blending are some of the known tasks that a blender can take care of. To ease these processes, various chopping attachments are available. Hence, the leg region is removable.

This also facilitates easy cleaning of the blender without posing any danger to the circuitry in the upper region. (Come to think of it, there is a Swiss woman’s brain behind this design.) 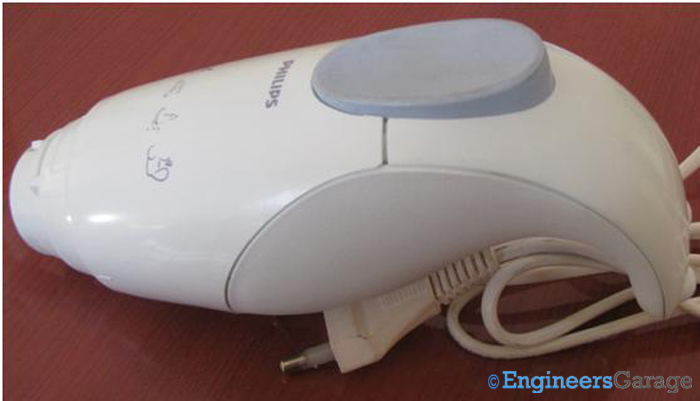 The upper region of a blender holds the only two electrical connections that the blender possesses:

Encased in the propylene of the upper body is the AC motor of the blender. Another benefit of using a good casing comes here when, even though one part holds the AC motor, it still remains light so that a user can comfortably use the gadget for long durations. 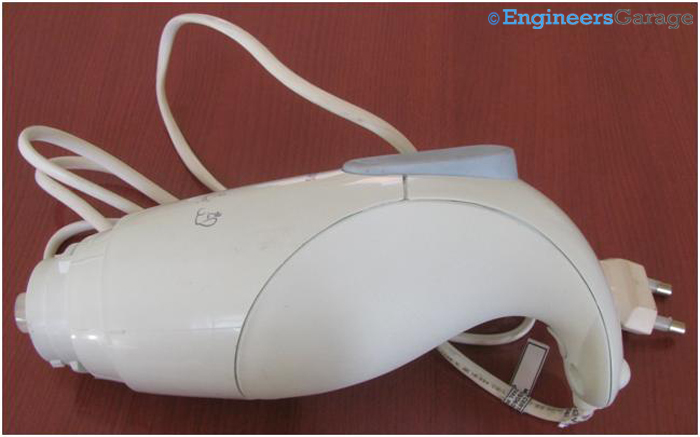 The user holds the gadget from the upper part and hence, it is desirable that its design fits in the hand of the user. User can hold the blender in one fist and have access to the push button. 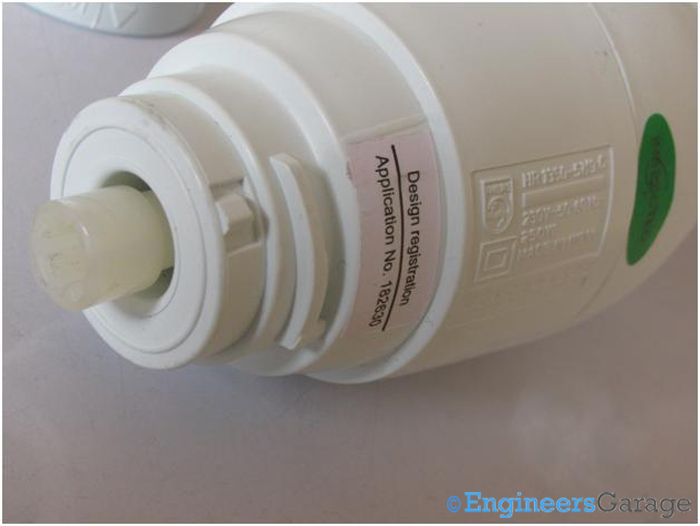 In the bottom of the neck a shaft extension of the AC motor is visible. This shaft clings to the lower part of the blender thereby making the blades rotate. Near this shaft are the latches which ensure that the blender assembly remains intact. 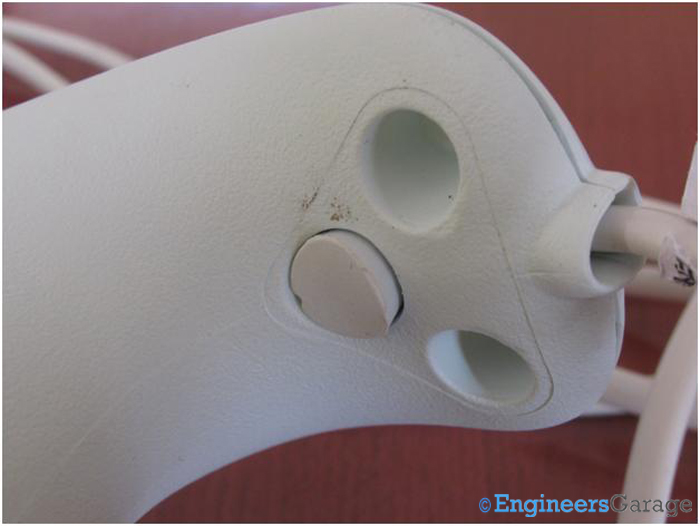 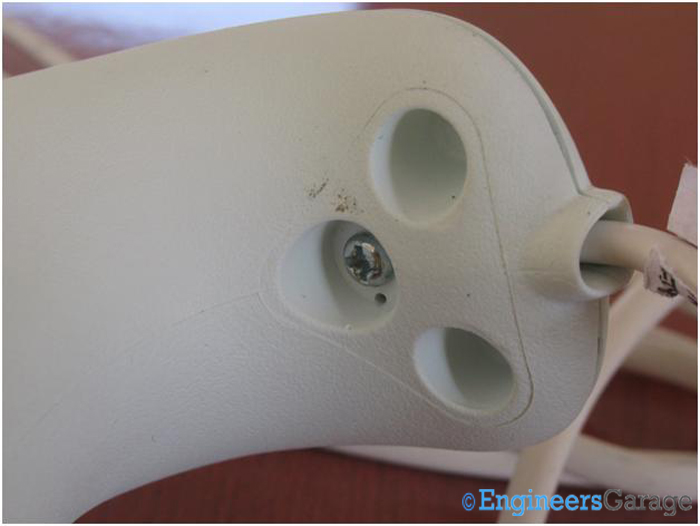 At first sight, there is no sign of screw on the blender structure which improves its aesthetic beauty and reduces chances for any leakage current. However, there is one screw binding the outer body to the inner components and it is sheathed by a triangular plastic cap as shown in Image 07. 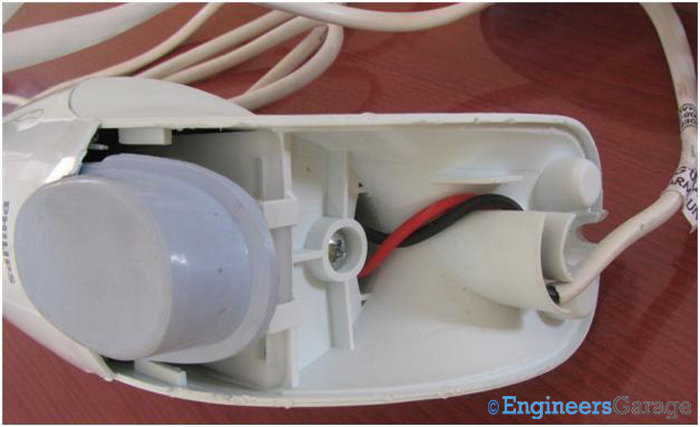 After taking out the screw, the lid of the upper body can be taken off to see the live and neutral wires extending into a pit over which another screw and push button switch are placed. This region is left empty so that the user doesn’t get disturbed by the vibrations caused by the motor. 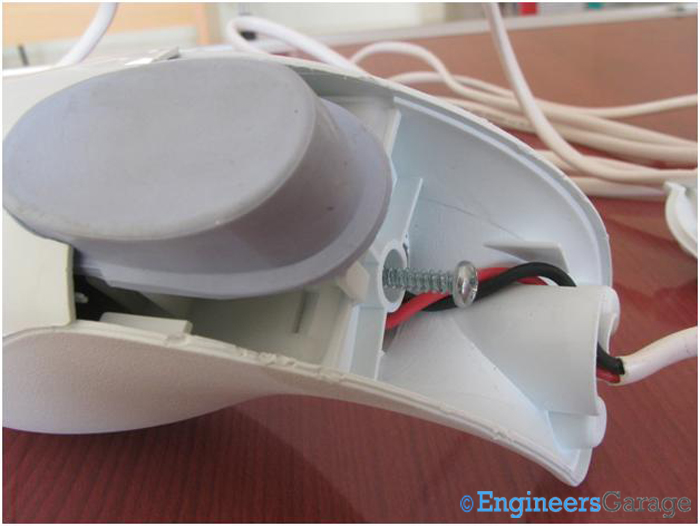 A fairly long screw holds the motor to the moldings of the blender keeping the movement of the motor stable and significantly reducing vague vibrations. 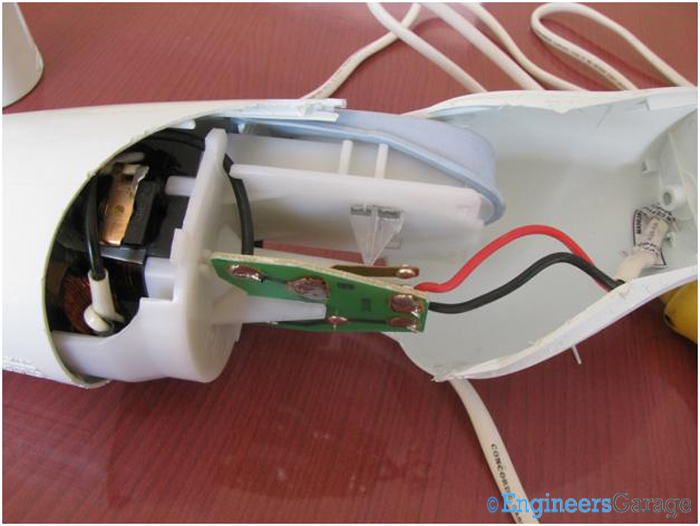 Fig. 11: PCB and other Internal Parts of Blender

Further excavation reveals the PCB (where both the wires are soldered), switch and some naked part of the blender’s motor. 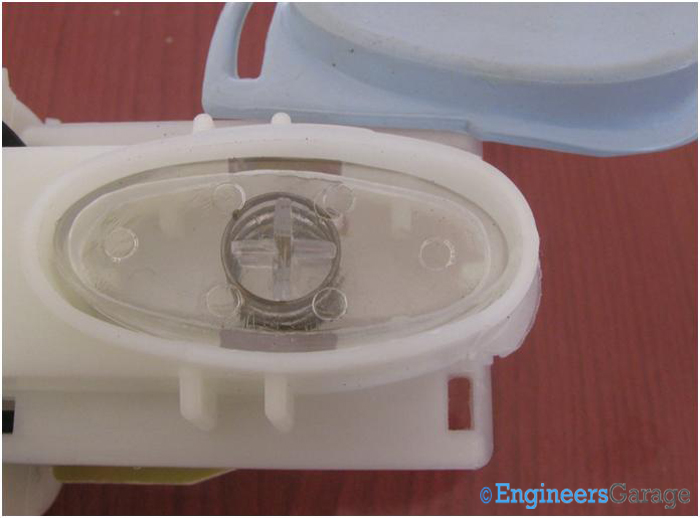 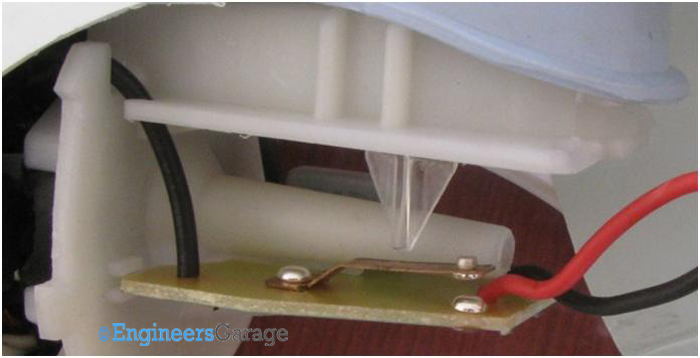 It is interesting to note the assembly of the switch. In image12 (a), upon looking carefully, a spring can be seen in a plastic casing placed beneath a layer of rubber. This plastic casing extends to get placed over a lever-like structure sited on the PCB as shown in image 12(b). This lever aids in transmitting current from the live wire to the rest of the PCB from where it is sent to the motor of the blender.

In image 12(b), the blender is switched OFF as the lever is in its ‘rest’ state. 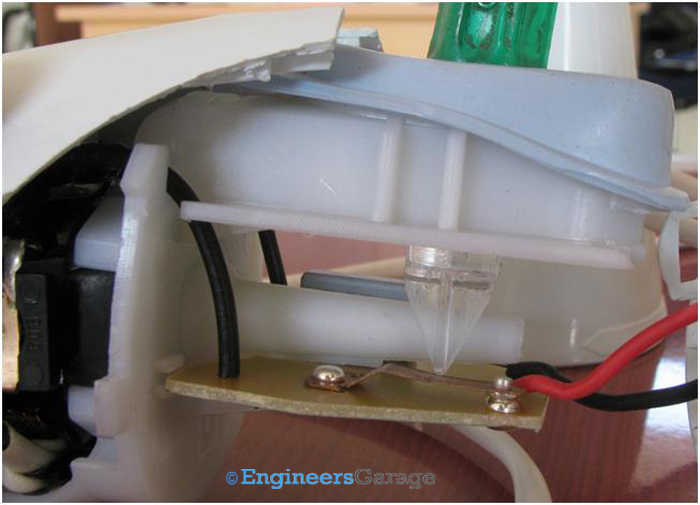 When the push button switch is pressed, the lever gets connected to the end where live wire is soldered and current starts to flow in the blender. 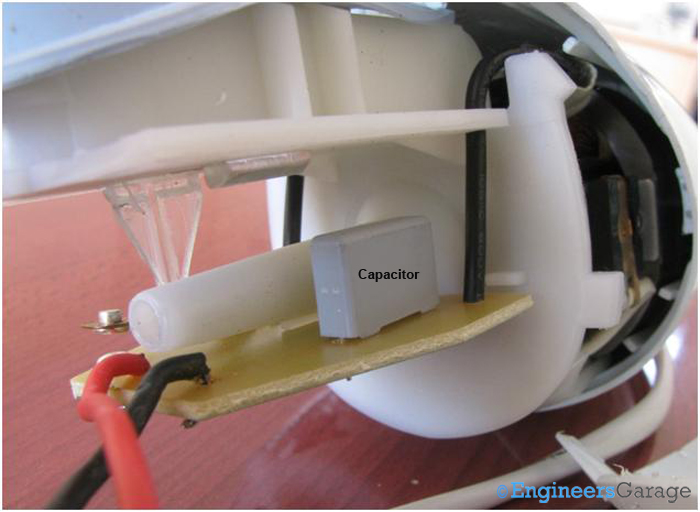 Fig. 15: Capacitor and PCB Layout in Internal part of Blender

A 300pF capacitor is mounted on the PCB that can perform multiple tasks such as regulating voltage, cancelling noise etc. 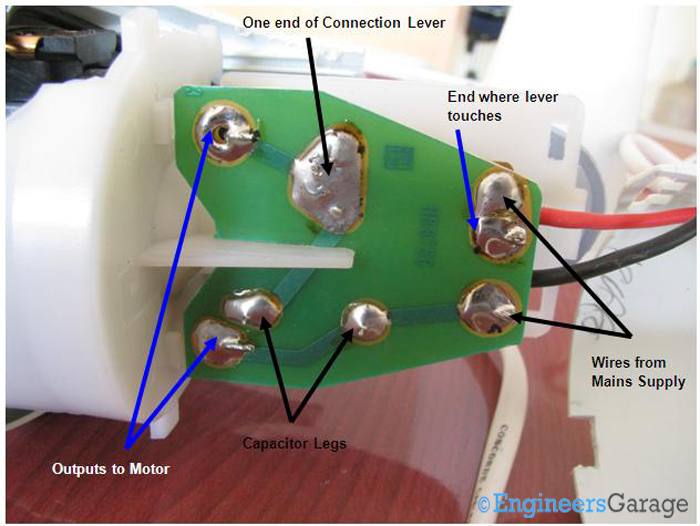 The rear of the PCB reveals the connection tracks as shown in image 14. The layout is quite easy to understand and soldered joints have been marked. The rest of the outer body can be chipped out to see the bare power unit of the machine. The heart of the blender to which all the electronic components interface is a single phase AC motor. 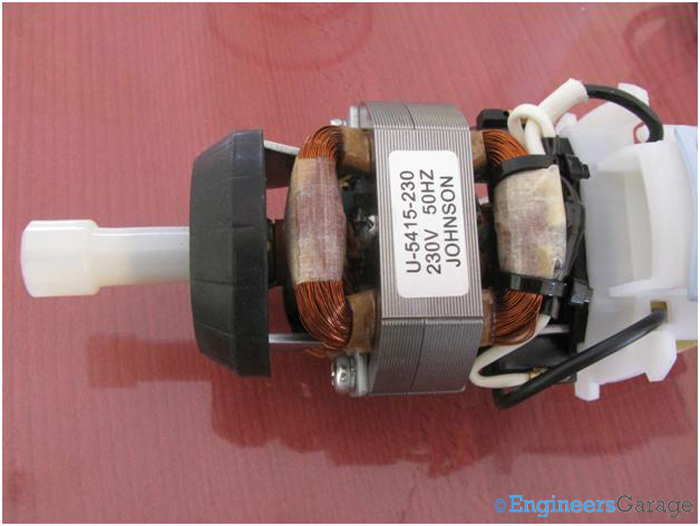 Thorough look of the single phase motor is shown in Image17. It is a single speed motor that can provide high RPM (approx 13,000).It is to be kept in mind that the RPM of the motor can vary when blender is used in dense dough.

The motor is tightly packed and from it protrudes the shaft that rotates the chopper blades. There can be variations in the motor configuration such as wattage consumption, RPM etc. Blenders that work on battery are equipped by a DC motor instead of AC.

In order to protect the propylene casing from getting damaged from metallic parts of the motor, a rubber ring is provided above the region from where the shaft extends. 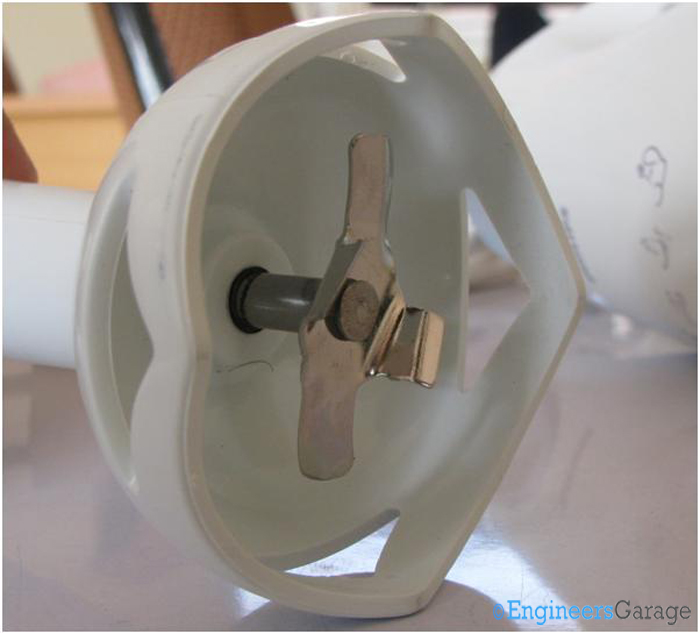 Not an electronic component but an equally important accessory of the blender is the blade. Made from stainless steel to serve for longer times, blades are available in various types depending upon the task they are designed for. Most blenders come with a changeable blade option; however, the one in Image 17 is attached to the lower region and cannot be changed.

It is great fun dissecting a hand blender body and scrutinizing its organ systems like they do in the Biology labs, EG team highly recommends this activity. But a word of caution must be given to those who live in their mom’s basement or to those who, like some in the EG team, are addicted to chocolate smoothies.Hand Blenders don’t work the same once opened. We know. We tried.