Let’s start  with the explanation of various peripheral interfaces with Beaglebone black.  I will  begin with a simple external  LED blinking with BBB for better understanding of  the configuration and usage of GPIO pin. I have  chosen the python scripting language for programming but you can write it in any another language also. I have used adafruit python BBB library to make application.

It is a simple learning tutorial of Beaglebone black. Here I connected two  LEDs with GPIO pin of Beaglebone black. When script is running, both  the  LEDs are switched ON and OFF for one second. After executing it  for five times, the pin status and configuration are clear.

Let’s first prepare the circuit connection. Take a breadboard and provide VCC and ground from BBB to breadboard line. Connect Supply 3.3 V from pin number 3 of header P9 and ground from pin number 2 of header P8. Connect the negative  and positive terminals of both  LEDs with the ground and 330 OHM resistor respectively. Connect another end of both resistors with pin number 8 and 9 of header P8. Provide the supply to Beaglebone black by connecting it with PC through USB cable. Now your circuit is prepared. 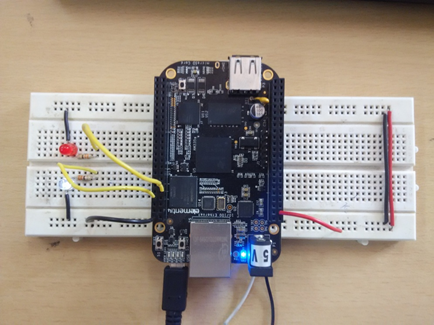 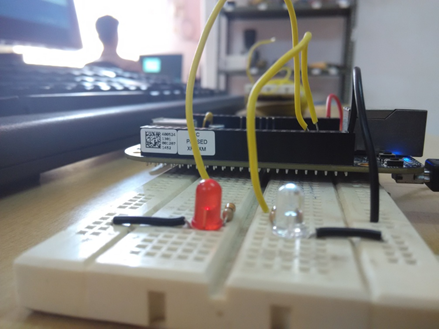 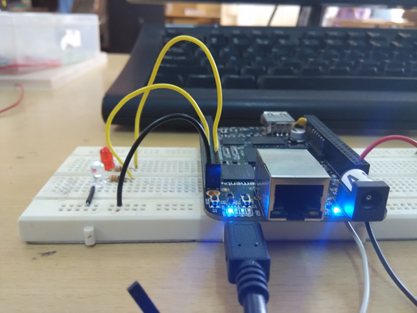 Open the command terminal and take an access of Beaglebone black through SSH as explained in getting started with Beaglebone black. Create a new file using touch command with .py extension. Open the file with any text editor (i.e. nano, vim etc.) and write a code in python language.

You can define the pin number with underscore followed by its number. (i.e. P8_8). Give  it an appropriate name.

Next, configure the pin as input or output as following function:

For example, I have declared  LED1 (pin number 8th oh header P8) as an output by following line:

Note: here I have declared  LED as an output. (led is output device)

You can make pin high and low by following function:

For example, I  have made led1 (pin number 8th oh header P8) as High and low by following line: