Nuclear energy, also called atomic energy is the most powerful kind of energy known to mankind ever. 1 kg of Uranium is equivalent to about 20 x 106 kW—hrs of heat energy or burning 2000 tons of high grade coal. This in a way can help us to limit Global warming and emission of toxic gases into the atmosphere.
Care should also be taken to ensure that  the spent fuel of the reactor is disposed off in a safe manner as the radioactive waste pose serious environmental and damage to lives when exposed. With a complete combustion or fission, approx. 8 kWh of heat can be generated from 1 kg of coal, approx. 12 kWh from 1 kg of mineral oil and around 24,000,000 kWh from 1 kg of uranium-235 U235.

The first commercial Nuclear Power Station started operation in the 1950s. There are now over 440 commercial Nuclear Power Reactors operating in 30 countries, with 377,000 MWe of total capacity.  They provide about 14% of the world’s electricity as continuous, reliable base-load power, and their efficiency is increasing. 56 countries operate a total of about 250 research reactors and a further 180 nuclear reactors power some 140 ships and submarines.
Today, the world produces as much electricity from nuclear energy as it did from all sources combined in 1960. Civil nuclear power can now have over 14,000 reactors years of experience and supplies almost 14% of global electricity needs, from reactors in 30 countries.  In fact, many more than 30 countries use nuclear-generated power. 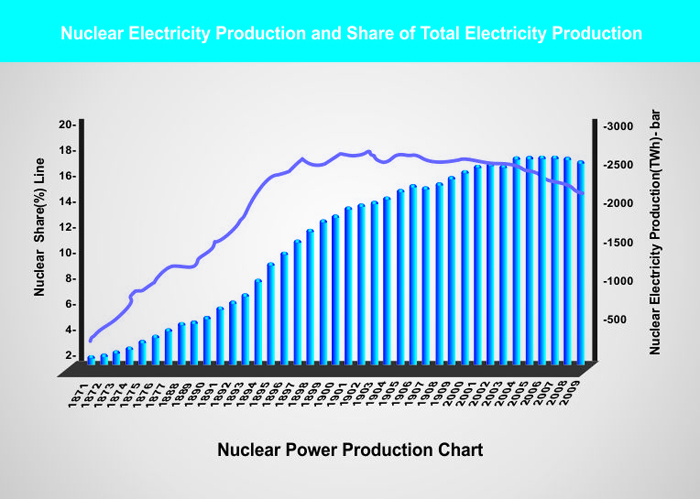 Fig. 3: Nuclear Power Production Chart
Principle of Operation
A nuclear plant works on a similar way as that of a thermal power plant, the main difference is that the fuel used to generate heat for the production of steam to drive the turbines that produce electricity. A nuclear plant uses Uranium or Plutonium as a fuel for heat production through fission reaction. The heat energy is used to boil the water for the production of steam in a steam generator.
Nuclear Fission
The fuel inside the reactor is a metal called Uranium. Uranium exists as an isotope in the form of U235 which is unstable. When the nucleus of an atom split, the neutrons released hit other atoms and split them in turn. More energy is released each time another atom splits. This is called ‘chain reaction’.
During the nuclear fission process U235 splits into two fragments of approximately equal size. About 2.5 neutrons are released and a large amount of energy (200 Million electron volt, Mev) is produced. The neutrons produced move at a very high velocity of 1.5 X 107 m/s and fission other nucleus of U235. Thus the fission process and release of neutrons take place continuously throughout the remaining material. 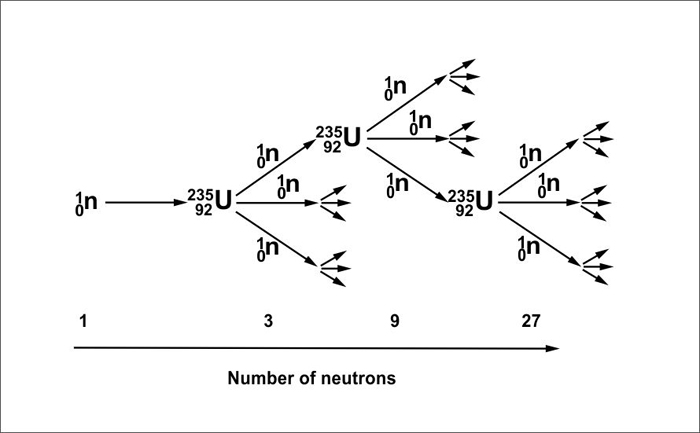 Fig. 4: Figure Showing Nuclear Fission Process Of Uranium
Control rods limit the number of fuel atoms that can split. They are made up of a material that absorbs neutrons. To turn on the reactor some rods are pulled out. The rods are made of boron or cadmium. General Components of a Nuclear Reactor
The other cycle of operation and components required are exactly same either as steam plant if steam is generated by using heat of fission. The steam or the gas may be used as working fluid in the nuclear power plant. The nuclear plant may be of steam turbine or gas driven turbine as per the choice of the fluid. The general schematic of a nuclear power plant is given here. 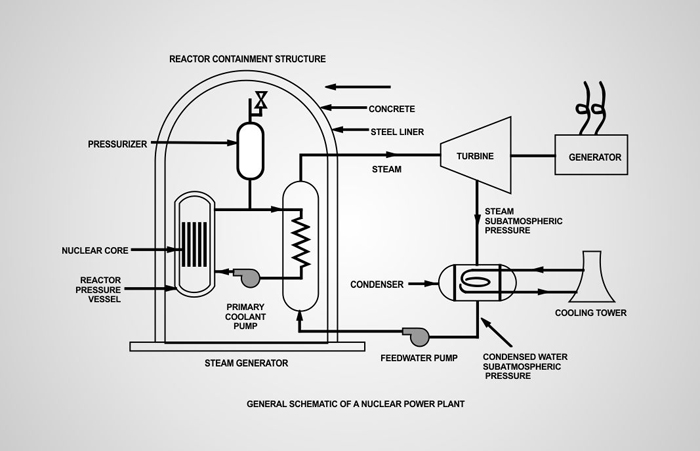 Fig. 6: Diagram Showing Components Of Nuclear Power Plant
Fuel
The nuclear fuels which are generally used in reactors are 92U235, 94Pu239 and 92U233. Among the three 92U235 is naturally available up to 0.7% in the uranium ore and the remaining is 92U238. The other two fuels 94Pu239, 92U233 are formed in the nuclear reactors during the fission process from 92U238 and 92Th232 due to the absorption of neutrons without fission.
The fuel is shaped and located in the reactor in such a way that the heat production within the reactor is uniform. The fuel elements are designed taking into account the heat transfer, corrosion and structural strength.
In homogenous reactors, the fuel and the moderator are mixed to form a uniform mixture i.e., uranium and carbon and then it is used in the form of rods or plates in the core of the reactor. In heterogeneous reactors, the fuel is used in the form of rods or plates and moderator surrounds the fuel elements. This arrangement is commonly used in most of the reactors. The fuel rods are clad with aluminium, stainless steel or zirconium alloy to prevent oxidation of uranium.
Moderator
The moderator material is used to reduce kinetic energy of the neutrons released during the fission reaction. A neutron travels at a speed of 0.25 eV or 2200 m/s and this is done in a fraction of a second. The fission chain reaction in the nuclear reactor is maintained due to slow neutrons when the ordinary uranium is used as fuel. The function of the moderator is to increase the probability of the reaction.
The slowing down of neutrons is effectively done by light elements like H2, D2, N2, O2, C and Be. The graphite, heavy water or beryllium can be used as a moderator with natural uranium. Ordinary water is also used as a moderator only in enriched uranium for the reason stated earlier.
Desirable properties of a good-moderator are listed here:
·         It must be as light as a possible as slowing down requires elastic collision with light elements.
·         Moderator should not absorb neutrons
·         Should resist corrosion
·         Should posses good mechanability
·         Moderator should have high melting point, if it is solid
·         It should have good conductivity

Reflector
It is always necessary to conserve the neutrons as much as possible to reduce the consumption of fissile material and to keep the size of the reactor small. The neutrons which are released in fission can be absorbed by the fuel itself, moderator, coolant or structural materials. Some neutrons may escape from the core without absorption and will be lost forever. To reduce the loss of escape of neutrons, the inner surface of the reactor is surrounded by a material which reflects the escaping neutrons back into the core.
The required properties of a reflector are low absorption and high reflection of neutrons, high resistance to oxidation. The commonly used reflectors are H2O, D2O and carbon.
Coolant
The main purpose of the coolant in the reactor is to transfer the heat produced inside the reactor. The same heat carried by the coolant is used in the heat exchanger for further utilization in the power generation. The essential qualities for a coolant are:
·         It must not absorb neutrons
·         Must have high radiation and chemical stability
·         Non-corrosive
·         High boiling point (if liquid) and low melting point (if solid)
·         Non-oxidizing and non-toxic
Most commonly used coolants are heavy water, He, CO2, Na.

Control Rods
Some type of control is essential to fulfill following functions:
·         To start a nuclear chain reaction when the reactor started from cold.
·         The chain reaction should be maintained at steady state condition at the required level
·         To shut down the reactor at emergency conditions.
The control is necessary to prevent the melting of fuel rods, disintegration of coolant, and destruction of reactor as the amount of energy released is enormous. The materials used for control rods must have very high absorption capacity of neutrons. Some commonly used materials are cadmium and boron or hafnium.
Shielding
The reactor is a place of intense radioactivity and these radiations are harmful to human life. The common radiations from a nuclear reactor are ?-rays, ?-rays, ?-rays. The inner lining of the reactor is made of 50-60 cm thick steel plate and it sis further thickened by few meters using concrete. The thermal shield (steel plate) is cooled by circulation of water as it absorbs the energy of the fast moving neutrons.
Reactor Vessel
The reactor vessel encloses the reactor core, reflector and shield. It also provides the entrance and exit passages for directing the flow of coolant. The reactor vessel has to withstand pressure as high as 200 bar or above. The holes at the top of the vessel provided to insert the control rods. The reactor core (fuel and moderator assembly) is generally placed at the bottom of the vessel.

Different Types of Reactor
1.   On the basis of Neutron Energy
·      Fast Reactor
In these reactors, the fission effected by fast neutrons without any use of moderators.
·      Thermal Reactors
In these reactors, the fast moving neutrons are slowed down with the use of moderators. The slow neutrons are absorbed by the fissionable fuel and the chain reaction is maintained. The moderator is the most essential component in the reactor.
2.   On the basis of fuel used
·      Natural Fuel
In this reactor, the natural uranium is used as a fuel and generally heavy water or graphite is the moderator.
·      Enriched Uranium
Here the uranium used contains 5 to 10% of U235 and ordinary water as moderator.
Pressurized Water Reactor (PWR)
PWR is a light water cooled and moderated reactor uses enriched uranium as fuel. The pressurizing tank included in the circuit maintains constant pressure in the circuit throughout the load range. Electric heating coil in the pressuizer boils the water to form the steam which is collected in the dome as shown here and pressurizes the entire coolant circuit before starting the reactor. To reduce the pressure, water spray is used to condense the steam. A PWR is shown here. 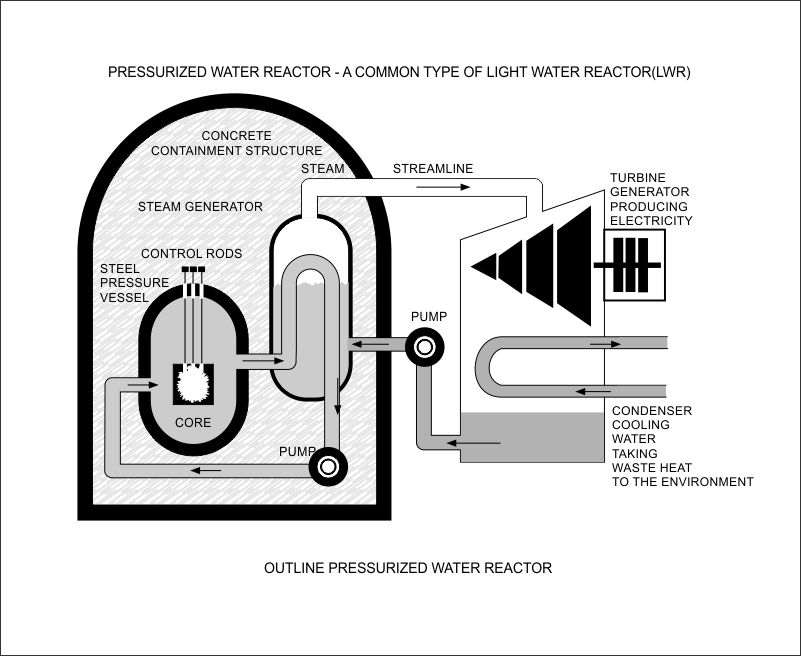 Fig. 7: An outline of Pressurized Water Reactor
The fuel used in PWR is uranium oxide UO2, it is highly resistant to irradiation damage and is very adapted to high burn-ups. It is also resistant to corrosion by high pressure water in the event of breakup in the fuel cladding.
Boiling Water Reactor (BWR)
In this reactor enriched uranium is used as the fuel and water is coolant reflector and moderator, as in the PWR except steam is produced in the reactor itself instead of a separate steam boiler. The majority of plants in USA are of PWR and
BWR types as diffusion plants are established for enrichment of fuel during Second World War. The BWR reactor is shown here. 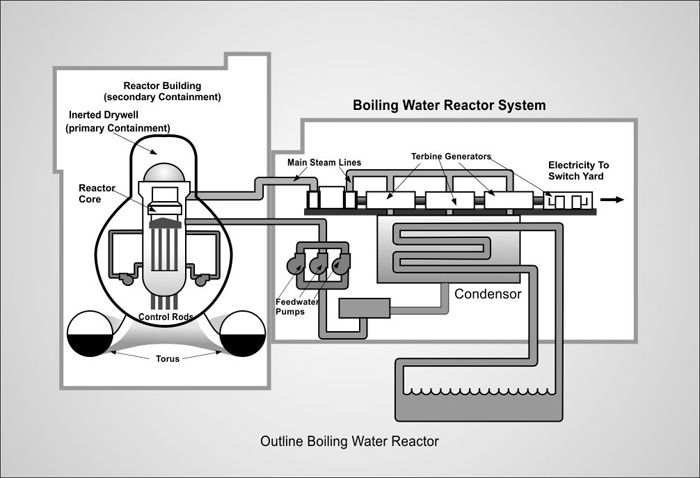