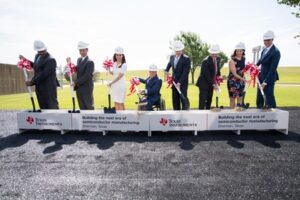 In a groundbreaking ceremony attended by elected officials and community leaders, TI Chairman, President and CEO Rich Templeton celebrated the start of construction on the largest private-sector economic investment in Texas history and reiterated the company’s commitment to expanding its internal manufacturing capacity for the long term.

“Today is an important milestone as we lay the groundwork for the future growth of semiconductors in electronics to support our customers’ demand for decades to come,” Templeton said. “Since our founding more than 90 years ago, we’ve operated with a passion to create a better world by making electronics more affordable through semiconductors. TI is excited to bring advanced 300-mm semiconductor manufacturing to Sherman.”

The potential $30 billion investment includes plans for four fabs to meet demand over time, supporting as many as 3,000 direct jobs. The new fabs will manufacture tens of millions of analog and embedded processing chips daily that will go into electronics everywhere.

“This groundbreaking marks the next era of semiconductor production in Sherman that promises to create decades of economic opportunity and improve the quality of life for the region,” said David Plyler, mayor of Sherman. “We are grateful for TI’s long and continued investment in Sherman and look forward to our continued partnership.”

Sustainable manufacturing
TI has a long-standing commitment to responsible, sustainable manufacturing. The new fabs will be designed to meet one of the Leadership in Energy and Environmental Design (LEED) building rating system’s highest levels of structural efficiency and sustainability: LEED Gold. Advanced 300-mm equipment and processes in Sherman will further reduce waste, water, and energy consumption.

Investing in manufacturing
Production from the first Sherman fab is expected in 2025. The fabs will complement TI’s existing 300-mm fabs, which include DMOS6 (Dallas), RFAB1 and the soon-to-be-completed RFAB2 (both in Richardson, Texas), which is expected to start production later this year. Additionally, LFAB (Lehi, Utah) is expected to begin production in early 2023.