Playing with the old Chatter Telephone is monotonous and non-trendy, try your hands in talking chatter smartphone, which seems to be the latest vogue in toy industry. Grant has come out with the advanced version of talking chatter telephone by Fisher Price, which was recently seen in the Disney movie named Toy story 3. It is an all plastic model shaped in the form of telephone.

The modified version of chatter smartphone includes Raspberry Pi Model B+. It gives the phone more brains and a Wi-Fi dongle provides wireless network access. It is accompanied with a custom Python script with codes. The original rotary dial plus an ‘on hook’ sensor is added as input and as output, an audio through the built-in speaker and eye movements controlled by a servo. That’s all you need to build the phone. In case, you want to change the original components, you can add screen or buttons to it. 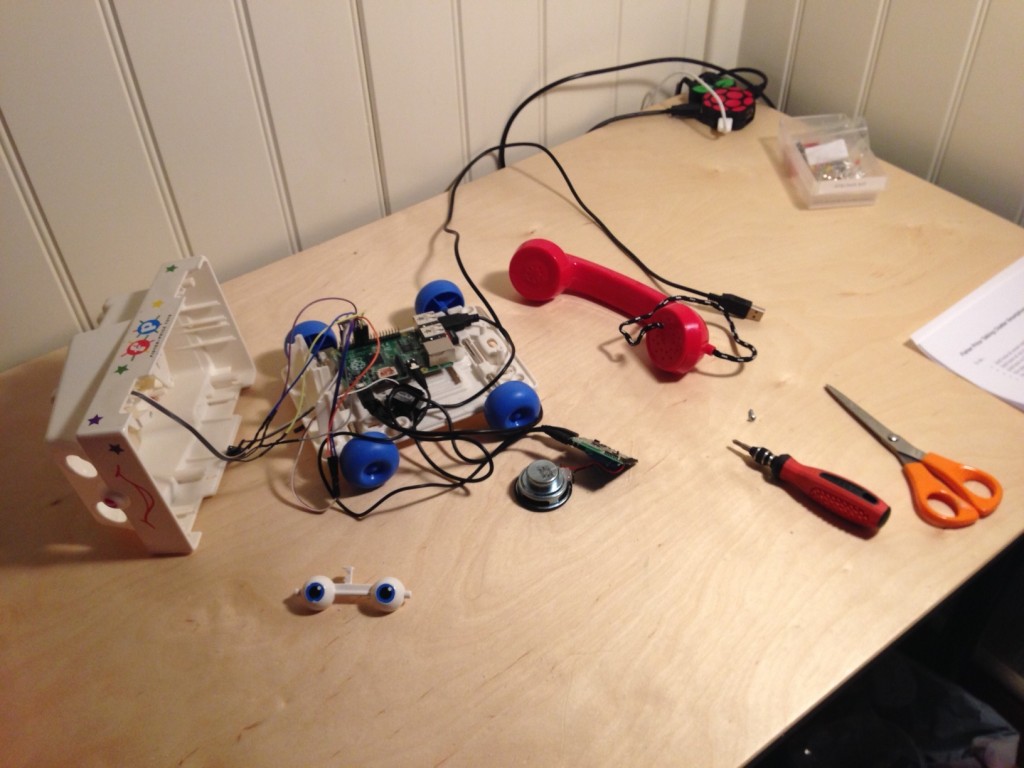 The fun part is the push notification system that uses a Twitter account to pull new alerts from. The phone is compatible with any standard Web Service (JSON API). Volume would be extended to the Pi’s audio jack out to the back panel of the phone, potentially making it a high-end Hi-Fi system.

The rotary dial uses a binary-like encoding mechanism for releasing three microswitches in various sequences. The original metal bar that linked eye movements to the mechanical turning of the front axle is removed with a 9g servo while with some stiff wire, a custom linkage between the servo horn and the eyes is created to allow complete control of eye movements up, down and anywhere in between.

You don’t need resistors, diodes or anything sort of electronic. Here, it is simply soldered to female pin headers onto the original dial wiring. The Pi’s internal pull-up resistors has been utilized to make it work reliably.

The speaker generally takes power from USB audio in through a standard headphone jack. But here it is disassembled and the housing is discarded, then the parts are mounted in place of the original speaker inside the phone. The phone could also be used as a Bluetooth speaker for phones and computers.

As already mentioned, the software is written in Python and it works reliably and is quick and easy to put together

This code provided work with any Raspberry Pi distribution and Grant personally uses Google Coder. After the Pi has booted, access it via a browser and define a password which then allows SSH and SFTP connections from any machine on your network

The phone is equipped a mode where the phone would play MP3 clips, that was recorded before the phone was took apart, whenever the receiver is on the hook.. It also includes interactive voice menu sounds and all menu options