In the previous tutorial, we discussed magnetism, electromagnetism and inductance. Inductance can be useful in circuits. The electronic components that are designed to offer inductance in a circuit are called inductors.

Inductors
Most of the conducting materials (metals) are paramagnetic or ferromagnetic while most of the non-conducting materials (non-metals) are diamagnetic. Any conductor shows some inductance in response to change in magnitude or direction of the current. Even a simple straight wire shows some inductance, though it is small enough to be neglected in a circuit. If the same wire is wrapped in a loop, its inductance is increased. More the number of loops for the same length of wire, greater the inductance is shown by it. The inductance of a loop or coil of wire can be multiplied many times by using a suitable ferromagnetic core.

The simplest inductors are air-core coils. These are constructed by winding a coil of wire around plastic, wood or any non-ferromagnetic core. The inductance of a coil depends upon the number of turns, radius of the coil and overall shape of the coil. The inductance is proportional to the number of turns as well as the diameter of the coil. It is inversely proportional to the length of the wire for a given diameter and number of turns of the coil. So, closer will be the turns, greater will be the inductance. The current carrying capacity of the inductor depends upon the material and thickness of the wire. The operating losses (in the form of heat) from an inductor largely depend on the material used as a core in the inductor. 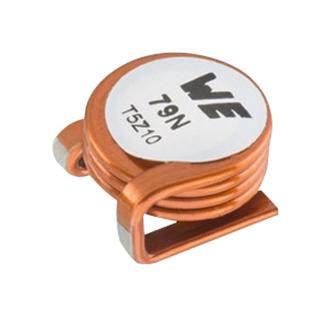 The air-core coils offer small inductances that can be a maximum 1 mH. The air-core coils can be designed to have unlimited current-carrying capacity by using heavy-gauge wire over a large radius. These inductors are almost lossless as air does not dissipate much energy in the form of heat. Higher is the frequency of AC current, less is the inductance required to produce significant effects. So, air-core inductors are quite suitable for high-frequency AC circuits due to lossless operation, high current capacity and sufficient inductance values.

Toroids as inductors
Toroid is another most common form of inductors these days. Toroids have a donut-shaped ferromagnetic core on which the coil is wound. The toroids need fewer turns and are physically smaller for the same inductance and current-carrying capacity compared to solenoidal coils. Another major advantage with toroids is that the flux is contained within the core which avoids any unwanted mutual inductance. 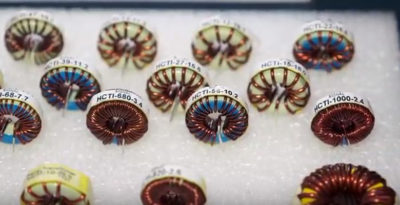 However, it is difficult to wind the coil in a toroid. It is even much difficult to permeability tune a toroid. Designing variable inductors on toroid involves complex and cumbersome construction. The circuits where mutual inductance is wanted, the different coils need to be wound on the same core in case toroid is used as an inductor.

Inductor in DC circuit
Practically, inductors are not useful in DC circuits as they will show no inductance for constant currents. However, assuming an inductor connected in a DC circuit can be useful in understanding its working principle and its behavior to pulsating DC voltages. Suppose a pure inductor is connected to a voltage source via a switch. When the switch is closed, the voltage is applied across the inductor causing a rapid change in current through it. As the applied voltage increases from zero to a peak value (in a short time), the inductor opposes the flow of changing current through it by inducing a voltage opposite in polarity to the applied voltage. The induced voltage during energizing of the inductor is called back EMF and is given by the following equation –

di/dt is the rate of change of current with respect to time.

A sudden change in current through the inductor gives infinite voltage, which is not feasible. So, current through the inductor cannot change abruptly. The current faces the effect of inductance for every small change in magnitude and slowly rises to its peak constant value. So, initially, the inductor acts as open circuit when the switch is closed. The back EMF remains across the inductor until the current is changing through it. The induced back EMF always remains equal and opposite of the rising applied voltage. As the voltage and current from the source approach a constant value, the back EMF drops to zero and the inductor acts as a short circuit like a connecting wire. While energizing, the power stored by the inductor is given by the following equation –

P = V * I = L*i*di/dt
Where,
P is the electrical power stored by the inductor.
V is the peak voltage across inductor.
I is the peak current through inductor.

Practically, the back EMF or forward EMF developed across an inductor is many times larger than the applied voltage. If only an inductor is connected with a voltage source or inductor is connected in a DC circuit without any protection, the electrical energy given back on opening the switch is released in the form of a voltage spike or spark at the switch contact. If the inductance is large or current in the circuit is high, the energy released in the form or arc or spark at the switch contact can even burn or melt it. This can be avoided by using a resistor and a capacitor (RC) network in series with the switch contact. This RC network is called Snubber Network. It let the electrical energy released by the inductor to charge and discharge the capacitor, so it does not damage any other component. In many circuits, protection diodes are used to save other components of the circuit from back or forward EMF of an inductor or solenoid.

Accordingly, the peak amplitude of the current through the inductor is given by the following equation:

The signal behavior of an inductor can be summarized as follows:

In the next article, we will discuss various non-ideal characteristics and key performance indicators of inductors.