Continue to Site
This article talks about a DIY device developed by Duncan Bryant which was published in the community section of an NGO’s website named American Homebrewers Association (AHA). In this project, Duncan came up with a dual stage temperature control that could manage temperatures of appliances like fermentation chamber, kegerator or keezers. 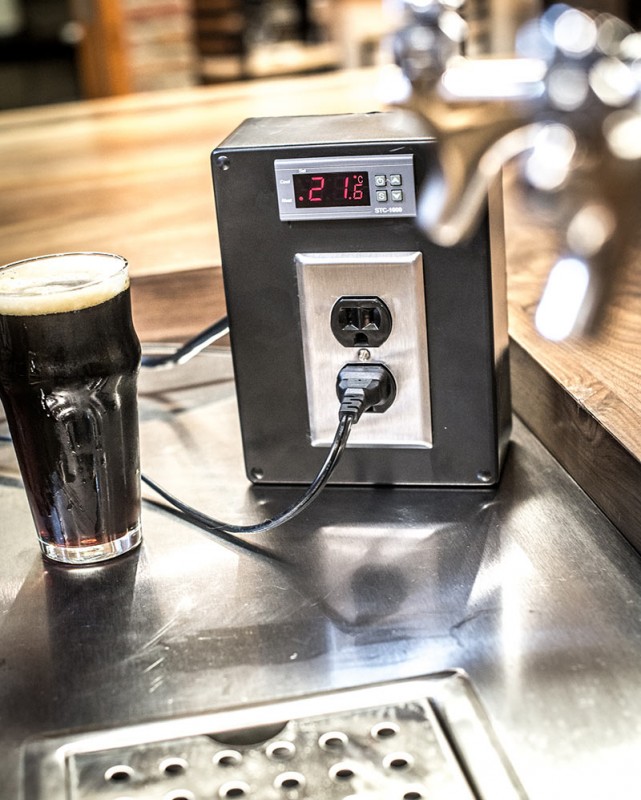 Figure 1: DIY Temperature Controller
The setup allows controlling a cool and hot trigger separately, whereby the refrigerator is sourced to the cold trigger and a heat source is connected to the hot trigger. A target value is set in advance and any change in the temperature directly affects the functioning of the device. In other words, if the temperature falls below the target, the heating is turned on and it works the other way round as well.
It is important to note that this project involves knowledge of electric wiring. So, one has to make sure that he/she has got proper guidance and assistance before taking up this task.
Duncan started the procedure by acquiring the required materials and tools for building the device. He bought a digital temperature controller with sensor (STC-1000), a project box to house all the electronic parts, power outlet with a wall plate, grounded power cord measuring 8+ feet, wire connectors, wire strippers, pliers, multimeter, and a dremel.
Before proceeding with assembling all the parts, this setup requires some preparations. For this, Duncan put the STC-100 and wall outlet on the project box at the required spot and marked the outline with a pencil. Then he cut the outline with a dremel and made holes in the box in a way that both the tools fit perfectly through them. After that, he drilled holes for the power cable and the temperature probe which depends on the position of the controller.
The next step is to cut 8 pieces of wires from the power cord each measuring 5-inch in length. In order to avoid any kind of confusion, Duncan sliced 3 pieces of black wire, 4 pieces of white wire and 1piece of green wire. He stripped half-inch of the insulation on each end of the wire segments to reveal the inner portions. Then he broke the bridge on one side of the power outlet to allow both heating and cooling control. The tab can be broken with the help of pliers by bending it back and forth until it snaps out.
When all the components were in place, Duncan proceeded with the wiring which is done assuming that the box has been already positioned otherwise running the cords would create a lot of problems. Connecting all the wires between the power outlet and the STC-1000 would then be followed by finishing touches on the controller. This involves placing all the parts in place for which the holes were drilled in the project box. After this, the box is covered and screwed at the desired spot.
Finally, when all the components are arranged and connections are established, the temperature controller would start working as soon as it’s turned on. The functionality is quite simple and involves triggering the cooling and heating devices with the change in the target values. The sensor carries programmable parameters implying that the user can edit its temperature set value, difference set value, compressor delay time and temperature calibration value.
Filed Under: Reviews