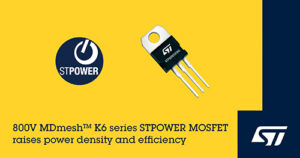 With the 800V STPOWER MDmesh K6 series, STMicroelectronics is setting the benchmark for this super-junction technology, combining best-in-class performance with ease of use. MDmesh K6, with the top RDS(on) x area at 800V currently available in the market, allows compact new designs that combine high power density with efficiency.

An integrated ESD protection diode increases the overall ruggedness of the MOSFET up to Human Body Model (HBM) Class 2.