When a communication is to be established, that too wirelessly, with a remote device, we typically employ optical radiations or radio waves or sometimes, acoustic waves (for underwater applications).  These three types of wireless communications basically differ in their frequencies. All frequencies starting from frequency bands like LF, HF, VHF, UHF and so on, extending up to microwaves and millimeter waves are referred to as radio waves. Acoustic waves use ultrasonic portion of frequency spectrum. Optical Radiations use visible and infrared portion of the spectrum. 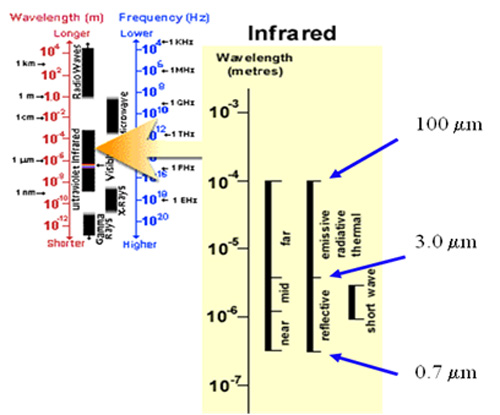 Infrared radiations have been widely utilized in various electronic gadgets and sensors. Right from the TV remotes to the sophisticated devices like Night Vision equipments use Infrared waves for different applications.
Subsequent sections will discuss one of the applications of Infrared waves- for Passive InfraRed (PIR) sensors.
physics behind IR sensors
There are different types of IR sensors working in various regions of the IR spectrum but the governing physics behind all of them are the three laws:
1.      Planck’s radiation law
Every object at a temperature T not equal to 0 K emits radiation. Infrared radiant energy is determined by the temperature and surface condition of an object. Human’s eyes cannot detect differences in infrared energy because they are primarily sensitive to visible light energy from 400 to 700 nm. Our eyes are not sensitive to the infrared energy (3.0 – 14?m).
2.      Stephan Boltzmann Law
The total energy emitted at all wavelengths by a black body is related to the absolute temperature as
Wb = s T4
where,  Wb : total energyemitted
s: constant = 5.67 X 10-8 m-2K-4
T : Temperatureof the object
3.      Wein’s Displacement Law
Wein’s Law tells that objects of different temperature emit spectra that peak at different wavelengths. It provides the wavelength for maximum spectral radiant emittance for a given temperature.
The relationship between the true temperature of the black body and its peak spectral exitance or dominant wavelength is described by this law

The world is not full of black bodies; rather it comprises of selectively radiating bodies like rocks, water, etc. and the relationship between the two is given by emissivity (e).

What is PIR Sensor?

Infrared sensors can be classified as active infrared sensors and passive infrared sensors. Both of them use the same infrared rays and same underlying physics. However, the only difference between the two is that, active infrared sensors employ infrared source (an active element) in addition to infrared detector.
Active infrared sensors operate by transmitting energy from either a light emitting diode (LED) or a laser diode. An LED is used for a non-imaging active IR detector, and a laser diode is used for an imaging active IR detector.  In both types of these, the LED or laser diode illuminates the target, and the reflected energy is focused onto a detector consisting of a pixel or an array of pixels. Photoelectric cells, Photodiode or phototransistors are generally used as detectors.
Contrary to Active Infrared sensors, Passive Infrared sensors do not contain any source of infrared radiation, they simply detect IR radiations. They totally rely on the three governing laws explained earlier.
A passive infrared system detects energy emitted by objects in the field of view and may use signal-processing algorithms to extract the desired information. It does not emit any energy of its own for the purposes of detection.
Humans at normal body temperature radiate quite strongly in the infrared region at a wavelength around 10 µm. Passive infrared sensors convert the infrared signal to current or voltage. Accordingly, they are used to detect presence, occupancy, and count.
Primarily used for intrusion detection, passive infrared sensor as used as a special purpose radiometer which detects the heat emitted by the body of an intruder. It offers high probability of detection within a defined area even without responding to anything else. Its presence is hard to detect which is not the case with active infrared sensors, ultrasonic detectors and the like.
Passive Infra-Red Sensors were originally being used for military and scientific applications.  Nowadays they can be seen in a wide range of commercial products for automatic light control, safety, cost-savings, etc. Almost any region where people occasionally walk or move through and need not be continuously lit, could be benefitted from the installation of a PIR sensor. Some examples are hallways, foyers, paths, driveways, garden areas and car parkings.
PASSIVE INFRARED SENSORS: HOW DO THEY WORK? 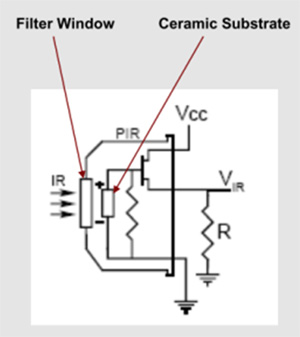 PIR sensor is made of ceramic material that generates surface charge when exposed to infrared radiations. As the amount of radiation increases, the surface charge generated increases. A FET is used to buffer this signal. As the sensor is sensitive to a wide range of radiations, a filter is used which limits the infrared rays falling on the sensor to 8um-14um range. Thus the output of an IR sensor is a function of infrared radiation. But since the output is affected by vibration, radio interference, sunlight, etc. as well, dual sensing elements are used. Both sensors are connected out of phase such that any excitation common to both gets cancelled out.
The field of view of these sensors is the area or zone which it sees or where changes in the infra-red radiation can be sensed or detected. Typically, to enhance the range and field of view, the field of view is divided into number of zones (both vertically as well as horizontally) with the help of Fresnel Lens.; a Fresnel lens is a plano convex lens that is collapsed on itself to form a flat lens which retains its optical properties, but is thinner and has lesser absorption losses. 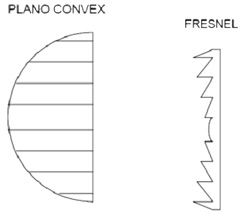 A typical construction of a PIR sensor is shown below.

Multi Element Fresnel Lens focuses the infra-red radiation emitted by an infrared source onto the PIR detector. After the light falls upon the PIR sensor, an electrical signal corresponding to the varying amount of infra red radiations is generated which is amplified/ processed and in turn may energize a relay.
All PIR sensors detect changes in infra-red radiation; infrared radiations in the form of heat emitted by the bodies including human beings, pets, vehicles, etc. Bigger is the body, more is the infra-red radiation and it becomes easier for the PIR sensor to detect them.
In most of the applications, passive infrared sensors look for the change in the environment. The sensors are sensitive to changes in infrared energy rather than absolute levels. The sensor first sets up equilibrium with the background conditions. If the state equilibrium is disturbed due to some intrusion or by some other mechanism, it perceives it as a change. This change is fundamental to the operation of PIR sensors. 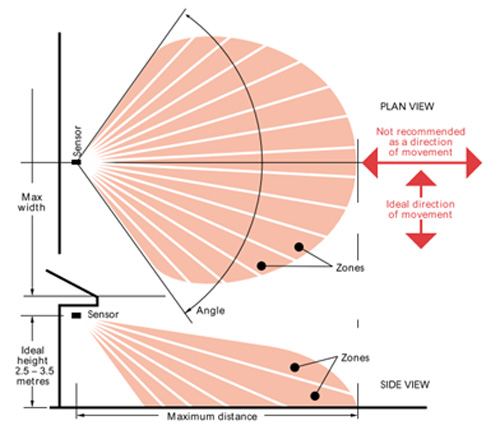 By dividing the region into a number of zones, numbers of separated zones are created. A person while walking through the area will appear in one zone, then disappear and then reappear in the next zone and so on. By doing so, he modulates the reference equilibrium conditions; the process is referred to as chopping. The signal produced is proportional to the temperature difference between the intruder and the background. 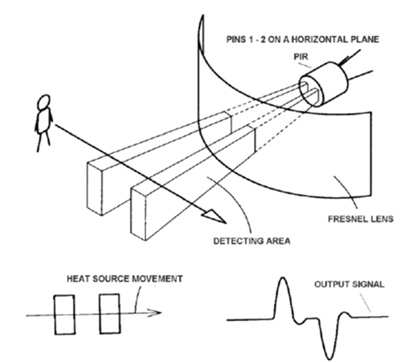 Fig. 8: Image Showing How Signal Is Produced In A PIR Sensor

When a person enters into a particular zone, infra-red level in that zone increases. The increase in the infra-red energy level is detected. The dual elements are excited one after another; resultant output is a positive signal followed by negative signal.  In this way, movement of a person is the field of view of the sensor can be detected. However, if the person moves within a zone, it is not possible to detect the changes.

Passive Infrared detectors primarily are of two types: Thermal & Quantum. In the PIR sensors used for human/pets detection for automatic lighting systems, intrusion detection, etc. thermal type- Pyroelectric based PIR sensors are used. For the sake of completeness, other types of PIR detectors are explained below:
·         Thermal PIRs
Thermal type has no wavelength dependence. They use the infrared energy as heat and their photosensitivity is independent of wavelength. Thermal detectors don’t require cooling but have disadvantages that response time is slow & detection time is low.
Types of thermal type IR detectors are
·         Thermocouple-Thermopile
Thermocouple uses Seebeck effect, one of the thermoelectric effects and is a detector that converts temperature into an electrical signal. The junction of dissimilar metals generates a voltage potential, which is directly proportional to the temperature. This junction can be made into multiple junctions to improve sensitivity. Such a configuration is called a thermopile. Thus, a thermopile is nothing but a junction of thermocouples connected in series. 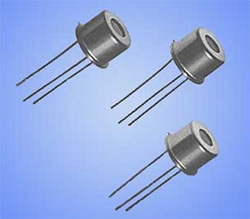 These detectors has a relatively slow response time, but offers the advantages of DC stability, requiring no bias, and responding to all wavelengths.
·         Bolometer
A bolometer is a simple thermal or total power detector. A bolometer changes resistance when incident infrared radiation interacts with the detector. Therefore, sensing material used for bolometers should have very high temperature coefficient of resistance; superconductor is an ideal candidate for sensing temperature in a bolometer. Typically, thermally sensitive semiconductor is made of a sintered metal oxide material. It has a high temperature coefficient of resistance.
It consists of two main elements: a sensitive thermometer and a high cross section absorber. The absorber is connected by a weak thermal link to a heat sink (at temperature T0). Incoming energy falls upon the absorber. Incoming energy is converted to heat in the absorber. Temperature of the absorber changes depending upon the changes in the power of incoming energy. Bolometer works by measuring this change in temperature. 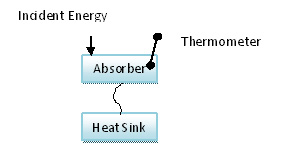 Pyroelectric detectors use PZT having pyroelectic effect, a high resistor and a low noise FET, hermetically sealed in a package. Pyroelectric materials are crystals, such as lithium tantalate, which exhibit spontaneous polarization, or a concentrated electric charge that is temperature dependent.PZT is spontaneously polarized in dark state. As infrared radiation strikes the detector surface, the change in temperature causes a current to flow. This results in change of polarization state which is reflected in terms of voltage change at the output.
This detector exhibits good sensitivity and good response to a wide range of wavelengths, and does not require cooling of the detector.
While thermopiles are proportional to incident radiations, pyroelectric detectors are proportional to rate of change of incident radiation. Thus, pyroelectric detectors are AC coupled devices. Also, pyroelectric detectors have very high impedance and hence require a buffer.