Raspberry Pi is the most popular single-board computer. As an embedded microcomputer, data acquisition is almost essential in Raspberry Pi. Though Pi has several GPIO (General Purpose Input/Output) pins, it does not have any built-in or onboard analog-to-digital converter. Therefore, Pi on its own cannot sample data from analog sensors. In embedded applications, analog sensors are frequently used. In fact, many sensors like light-dependent resistors (LDRs) and IR sensors are just not available in any digital form. In this case, analog sensors can be interfaced with Raspberry Pi using two ways. One is to use an external analog-to-digital converter; the second is to sample data from analog sensors using a microcontroller and transfer all captured data to Raspberry Pi via a serial interface.

Interfacing Raspberry Pi with a microcontroller only to fetch analog data is not a viable solution. An external ADC is the best solution when Raspberry Pi operates as a standalone embedded microcomputer, and analog data acquisition is needed. This project will explore how to perform analog data acquisition in Raspberry Pi using ADS1115 or ADS1015 ADC chips. In the same context, we will also discuss how we can read analog data from IR sensors on Raspberry Pi for obstacle detection in a Raspberry Pi robot.

ADS1115/ADS1015 Pi Vs. microcontrollers
As already discussed, we have two ways to sample analog data in Raspberry Pi. Before discussing the use of external ADCs like ADS1115/ADS1015, it is worth noting the difference between both approaches. When we interface a microcontroller like an Arduino board with Raspberry Pi, we interface a completely separate embedded solution with the microcomputer. If the Arduino board operates on a different voltage level like most of the Arduino boards are 5V circuits, we cautiously need to use a TTL logic level converter between the microcontroller and the Raspberry Pi. Otherwise, we will damage the entire Pi, or at least the board pins. In the case of external ADC, we can drive the ADC from the Raspberry Pi voltage outputs.

A microcontroller will run independently with its data sampling cycle. In this case, a Python script on Raspberry Pi will need to catch up with the sampling speed of the microcontroller. This also means that data acquisition control remains with the microcontroller and not the Raspberry Pi. This is sometimes useful when implementing time-critical applications where the sensor data must be immediately processed for a quick response. In the case of an ADC, the data acquisition and sampling rate are controlled by the Raspberry Pi. Some developers feel that Raspberry Pi is running a normal operating system can be lagging in the acquisition and processing of analog data with external ADCs as other processes can override currently running Python scripts. However, this problem can be easily solved by delegating the analog data sensing in a parallel thread by employing multi-threading.

A microcontroller must only be used with Raspberry Pi when several time-critical embedded tasks need to be performed in parallel. The Raspberry Pi, in this case, can be deployed in the backend for performing extensive data analytics, implementing machine learning or deep learning models on sensor data, managing communication with a cloud platform, and managing IoT (Internet of Things) operations.

In this project, we will be using ADS1115. ADS1115 supports two types of data acquisition – single-ended and differential. In single-ended conversion, analog data from each of the four analog input pins are independently sampled. The difference between the voltages at two analog input pins is sampled in a differential mode of operation. ADS1115 has a resolution of 16 bits, of which one bit remains reserved for plus/minus sign of the voltage difference in differential mode, and the remaining 15 bits are used for storing converted voltage values. The chip has an I2C interface for serial data communication with a microcomputer/microcontroller.

The sampling rate in ADS1115 can be set anywhere between 8 and 860 samples per second. Higher is the sampling rate; less is the time taken by ADC to capture and convert the analog signal. The chip also has a built-in gain amplifier, amplifying weak voltage signals 2-3x to 16x times. The conversion (single-ended or differential) can be done in two ways. The conversion is initiated by the Raspberry Pi (or controlling microcomputer/microcontroller) in one method. The converted value is stored in a register on ADS1115. The Raspberry Pi then reads the register. In the second method, conversion is done by the ADS1115 continuously. The signal is sampled at a preprogrammed rate (8~860 sps), and the converted value is repeatedly updated in a register on the ADS1115. The Raspberry Pi must repeatedly read the ADS1115 register according to the programmed sampling rate. If Raspberry Pi reads the register at a lower rate, it misses several captured samples. On the other hand, if Raspberry Pi reads the register at a higher rate, it logs several redundant values for the same samples.

ADS1115 has the following pin diagram. 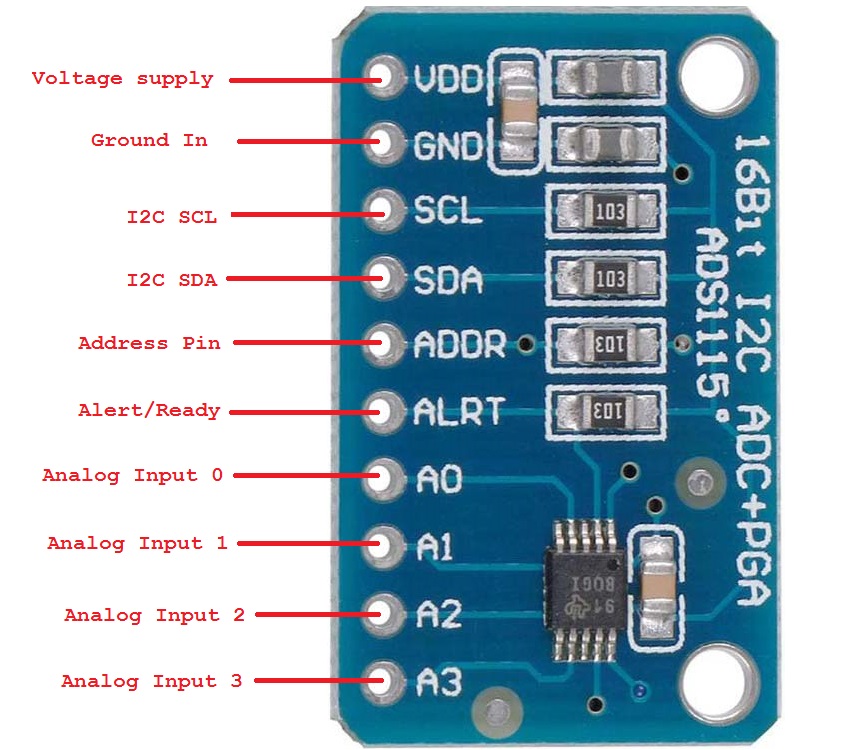 Wiring ADS115/ADS1015 with Raspberry Pi
ADS1115 and ADS1015 sample analog data from sensors and transfer the converted values to  Raspberry Pi over the I2C interface. Both chips use the same I2C protocol and have the same pin configuration. For connecting ADS1015/ADS1115, follow the circuit connections summarized in the table below. 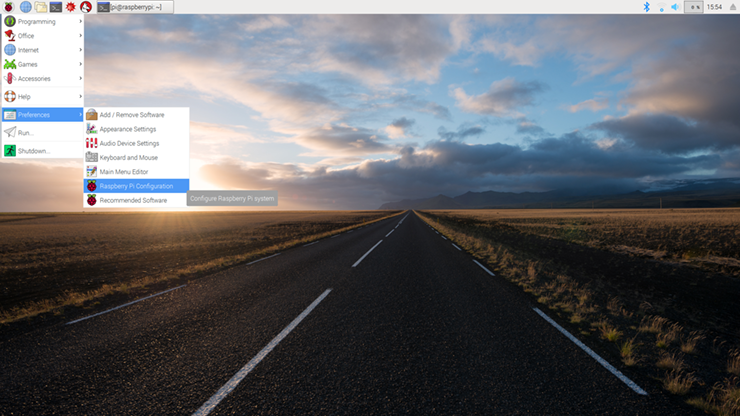 A configuration window will open, as shown below. 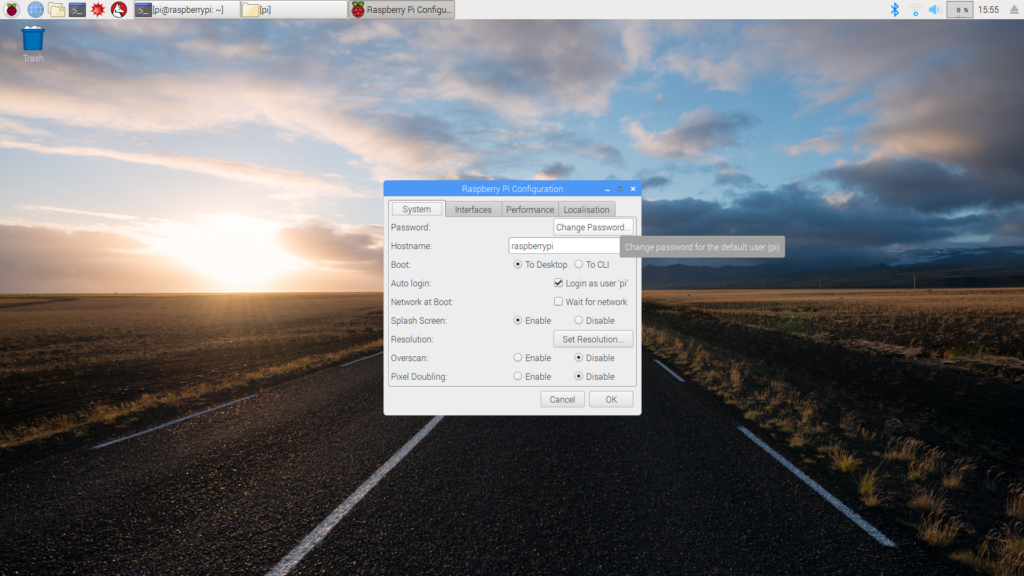 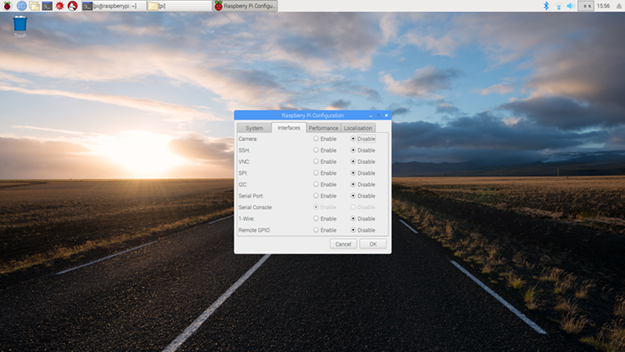 That’s It. Now Raspberry Pi can communicate over an I2C port. The I2C port in Raspberry Pi is shown in the image below. 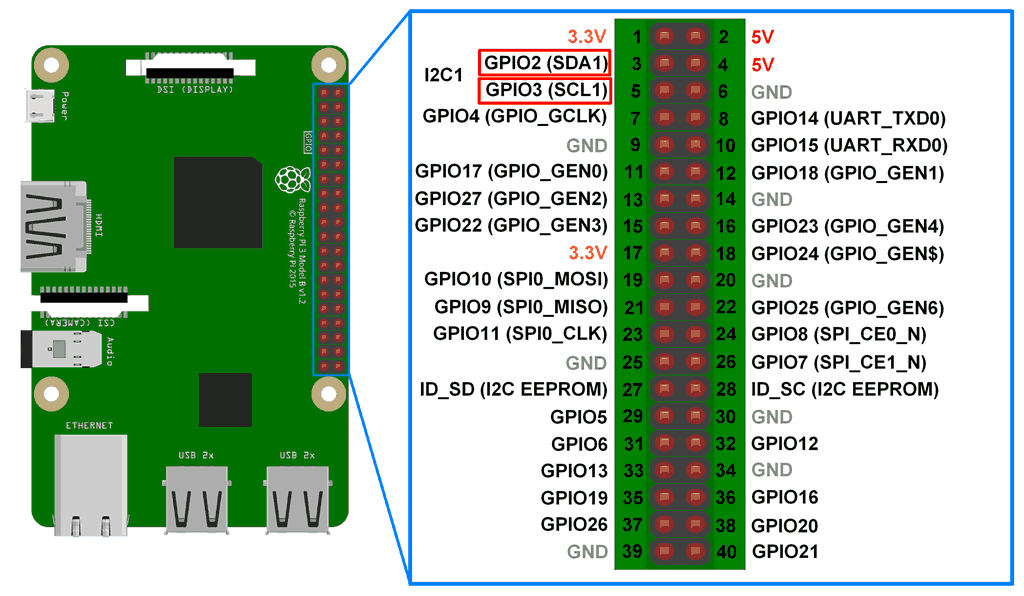 To learn more about I2C communication in Raspberry Pi. You may also be interested in how the I2C protocol works.

Installing ADS1x15 python library in Raspberry Pi
The Adafruit ADS1x15 Python library can be installed in Raspberry Pi manually or via the PiP package manager. For installing the library from source, open Bash Terminal by navigating Accessories->Terminal or simply clicking on the Terminal icon; then execute the following commands.

For installing the library using the PiP package manager, open Bash Terminal by navigating Accessories->Terminal or simply clicking on the Terminal icon; then execute the following commands.

Once the library is successfully installed in your Python installation, you can use it by simply importing the library in a script.

Then, you need to instantiate an object of the Adafruit_ADS1x15 class using the following statement. The instance is named ‘adc’ here; it can be any identifier.

Next, you need to set the gain for the built-in amplifier. The gain needs to be set according to the Programmable Amplifier Gain table provided in the ADS1015/ADS1115 datasheet. A quick reference of the amplifier gain and the desired sensing voltage range is summarized in the table below.

The gain can be set using the following statement.

Here, ‘value’ is a variable in Python script. The ADC readings can be fetched in a loop if multiple analog sensors are interfaced with Raspberry Pi via ADS1015/ADS1115. The actual voltages can be calculated using the equation stated above. Following is an example of deriving actual voltage reading.
GAIN = 1
value = adc.read_adc(0, gain=GAIN)
analog_voltage = value*(4.096/32767) 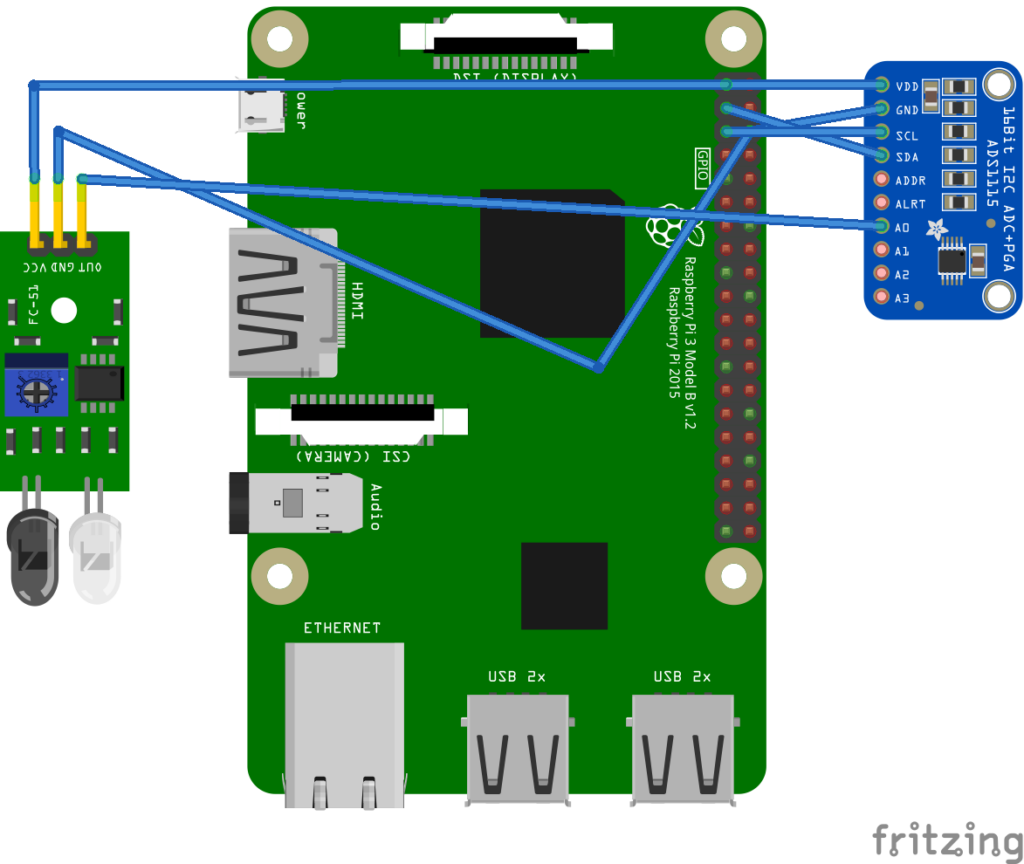 Conclusion
ADS1015 and ADS1115 are low-power high, resolution analog to digital converters. These can be easily interfaced with Raspberry Pi and communicated via the I2C protocol. These ICs can sense a maximum of four analog voltages simultaneously in a single-ended configuration. Therefore, making ADS1015 and ADS1115 the best ADCs for Raspberry Pi robots.