This article is to make the procedure of setting up the WiFi. The Raspberry Pi is connected to Windows PC through Ethernet cable and the GUI is obtained using a VNC server. Although Raspberry Pi Model B comes with 100Mbps wired Ethernet, it is also essential to connect WiFi. The best arrangement is to purchase a cheap USB WiFi connector and utilize one of the USB ports to get to our WiFi home router. Setting up a Raspberry Pi utilizes the Raspbian OS to get to your remote system is simple – This article will guide you through the procedure.

Before we continue I need to call attention to the significance of purchasing the compatible USB WiFi Adapter. Since not all the wifi dongles are plug and play to the Raspberry Pi. Some of the time you will need to download a driver to make them work. While drivers are typically accessible for Windows PCs – it is an alternate world for Linux and Raspberry Pi’s. This is the reason it is critical to purchase a WiFi Adapter that says “Linux” in the package. I utilize the Edimax – Wireless 802.11b/g/n nano USB adapter because I have found it to be cheap and very easy to work with. http://elinux.org/RPi_USB_Wi-Fi_Adapters — This link gives the list of plug and play compatible USB WiFi dongles for Raspberry Pi.

After booting and logging-in you want to make sure that the new wireless adapter is found by Raspberry Pi. To look at which peripherals the operating system found when booting run the following command:

This will give the list of USB devices connected to the Raspberry Pi. 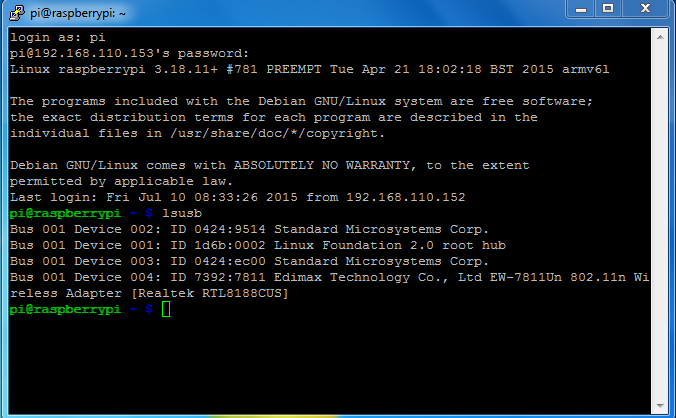 Your device should be in the list. Followed by this command will ensure that WiFi dongle is Recognized.

You can use the space-bar to scroll down a page at a time – towards the end you will see something similar to the following lines: 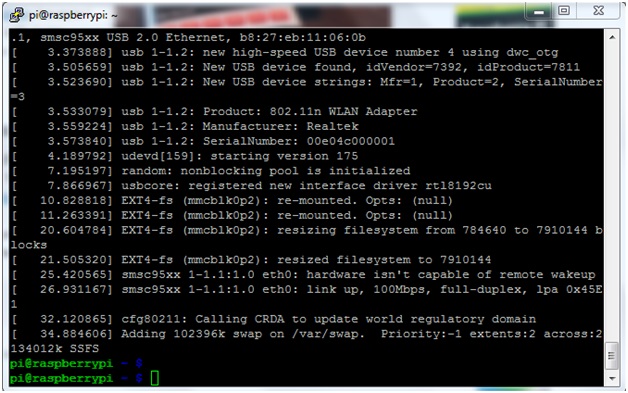 This means that the operating system recognized the USB WiFi Adapter using one of the built-in drivers (you can return to the terminal by pressing “q”). All that is left is to configure your WiFi connection.

Adding the network details to the Raspberry Pi:

Open a Terminal session enter the following command into it: 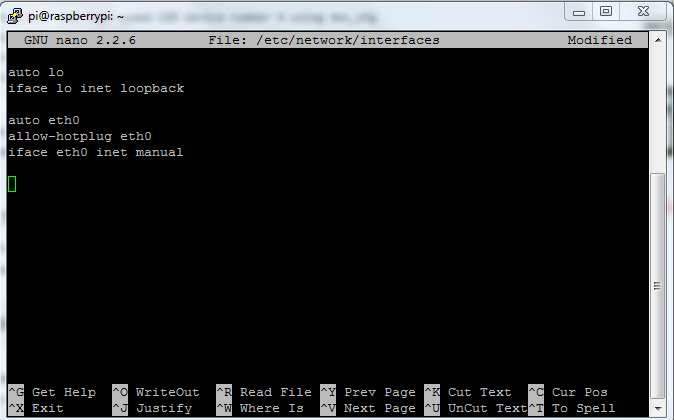 To configure your wireless network you want to modify the file such that it looks like the following:

After editing the file you should see something like the following: To save the file, press Ctrl+O this will write the file to the disk – afterwards you can exit nano by pressing Ctrl+X. If nano asks if you want to Save modified buffer? Press “Y” followed by hitting enter to confirm the filename.

Now open the wpa-supplicant configuration file in nano by entering this command:

Go to the bottom of the file and add the following:

Now save the file by pressing ctrl+x then y, then finally press enter.

At this point, wpa-supplicant will normally notice a change has occurred within a few seconds, and it will try and connect to the network. If it does not, either manually restart the interface with sudo ifdown wlan0 and sudo ifup wlan0, or reboot your Raspberry Pi with sudo reboot. 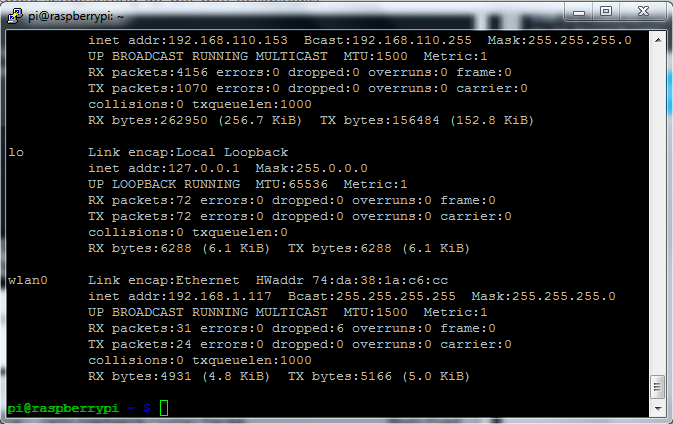 You can verify if it has successfully connected using ifconfig. If the inet addr field has an address beside it, the Pi has connected to the network. If not, check your SSID and password are correct.