In the previous tutorial we learnt about the Sampling Process, Discrete-time signals, their classification and also had an idea about transformation of discrete-time signals. These topics are the most basic and important entities of DSP. Now we will be studying about the systems which process these signals to give the desired form of output signals.

What we are going to learn in this tutorial:-

Where, T  is the general rule or algorithm which is implemented on x(n) or the excitation to get the response y(n). For example, a few systems are represented as,

Digital Systems are represented with blocks of different elements or entities connected with arrows which also fulfills the purpose of showing the direction of signal flow,

Some common elements of Discrete-time systems are:-

·  Adder: It performs the addition or summation of two signals or excitation to have a response. An adder is represented as,

·Signal Multiplier: This element multiplies two signals to obtain one.

Discrete-time systems are classified on different principles to have a better idea about a particular system, their behavior and ultimately to study the response of the system.

Relaxed system: If y(no -1) is the initial condition of a system with response y(n) and y(no -1)=0 ,  then the system is said to be initially relaxed i.e. if the system has no excitation prior to no .

The last example is the case of in-finite memory and the others are specified about their type depending on their characteristics.

Then the relaxed system T is time-invariant if and only if,

Otherwise, the system is said to be time-variant system if it does not follows the above specified set of rules. For example,

Note:- In order to check whether the system is time-invariant or time-variant the system must satisfy the “T[x(n-k)]=y(n-k)” condition, i.e. first delay the excitation by k units, then replace n with (n-k) in the response and then equate L.H.S. and R.H.S. if they are equal then the system is time invariant otherwise not. For example in the last system above,

So, the L.H.S. and R.H.S. are not equal hence the system is time-varient.

Note:- What about Folder, is it a time-variant or time-invariant system, let’s see,

Linear and non-Linear systems: A system is said to be a linear system if it follows the superposition principle i.e. the sum of responses (output) of weighted individual excitations (input) is equal to the response of sum of the weighted excitations. Pay attention to the above specified rule, according to the rule the following condition must be fulfilled by the system in order to be classified as a Linear system,

Then, the system is said to be linear if , 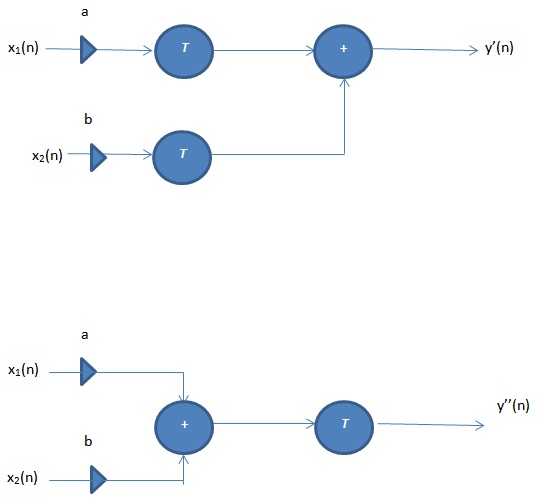 The explanation of the above specified examples is left as an exercise for the reader.

Where F[] is any arbitrary function. A non-causal system has its response dependent on future inputs also which is not physically realizable in a real-time system but can be realized in a recorded system. For example,

Stable and Unstable systems: A system is said to be stable if the bounded input produces a bounded output i.e. the system is BIBO stable. If,

This tutorial gave idea about the classification of systems as it is necessary to know some basic properties of the system for easy analysis. In the nest tutorial we will be studying about LTI(Linear and Time Invariant) systems and their properties and will also, if the time permits, see z-transformation which is done for the analysis of the systems and is analogous to Fourier transform in analog communications.