A transformer is an electrical device which works on the principle of Faraday’s law of electromagnetism used to step up or step down the input voltage. Transformers are of different types for example: Power transformers, Current Transformers, Potential Transformers, Pulse Transformer, RF Transformer and Audio transformers. The most common application of Current transformer is to reduce the current and provide galvanic isolation in current sensing devices. Some typical examples include SMPS, motor control and electronic lightning ballasts.

You may know how a current transformer works but how many of you have got the chance to see how actually it looks from inside? It’s definitely a small instrument which works greater than its size. In today’s insight you will know how current transformers are made to work. 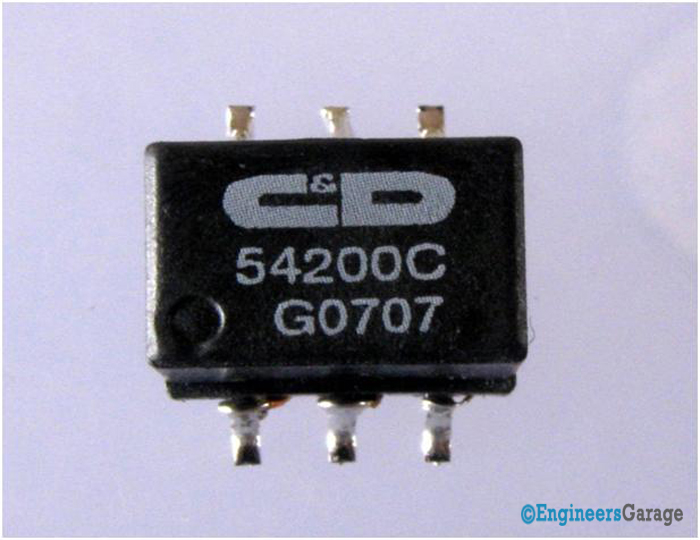 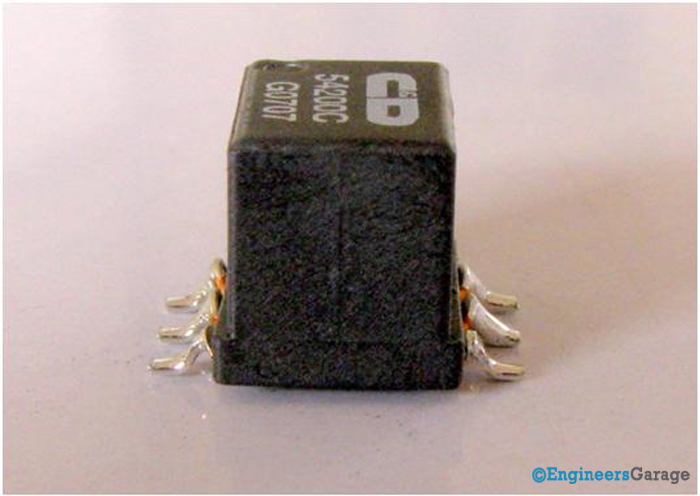 This transformer has a polymer housing made from a material known as UL94 V-0 which complies with the RoHS standards. UL94 a code given to the test for flammability of plastic materials used in electronic devices.

The last two alphanumeric represents their flaming rating. In thisV-0 means that the flames will be vanished in maximum 10 seconds with no burning material can fall. 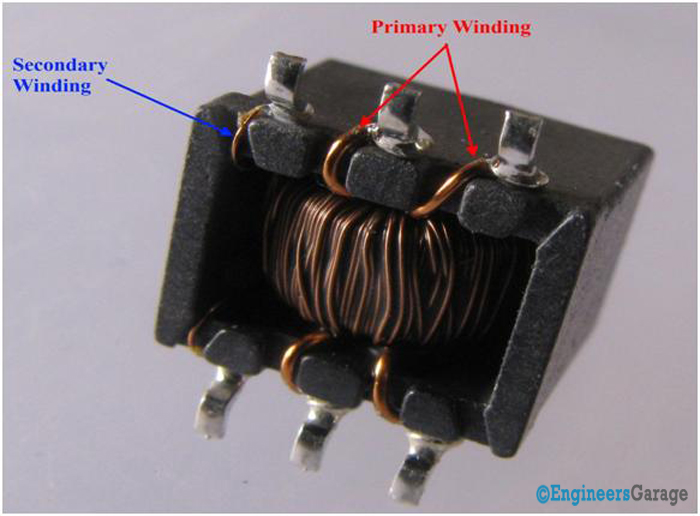 Bottom view of the transformer is shown in the picture above. Copper wires aregenerally used as current carrying conductor. There are six terminals out of which two are connected with the secondary winding and four with primary winding. Primary winding has area of cross section bigger because resistance of a wire is inversely proportional to its cross sectional area. Input current for the transformer has to be more than secondary. To minimize the magnetic flux density secondary coils have lower cross sectional area.

There are two primary coils in this device in the ratio 1:1 which improve the safe current capacity of the transformer. 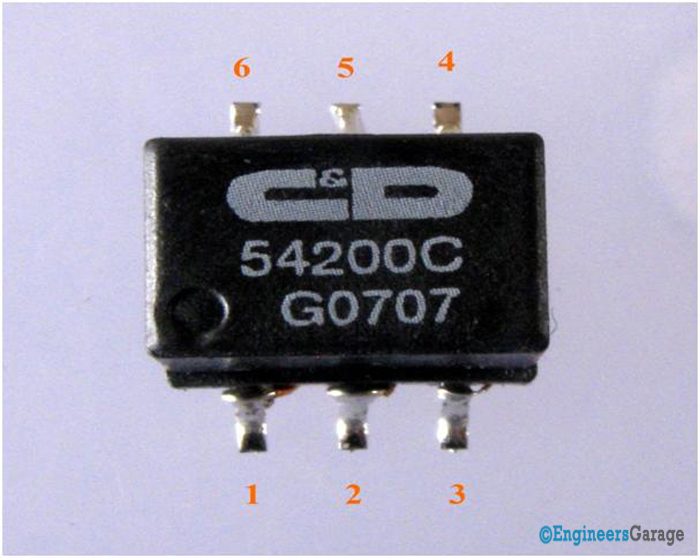 It is a 6 pin device which serves as input and output terminals for it. Circular groove at the bottom left corner helps to identify the pin structure. Primarywinding are connected to the pins 1, 6& 2, 5 and 3, 4 to the secondary winding. Turn ratio of the device is 1:1:200, where 200 is the secondary coil turn ratio. 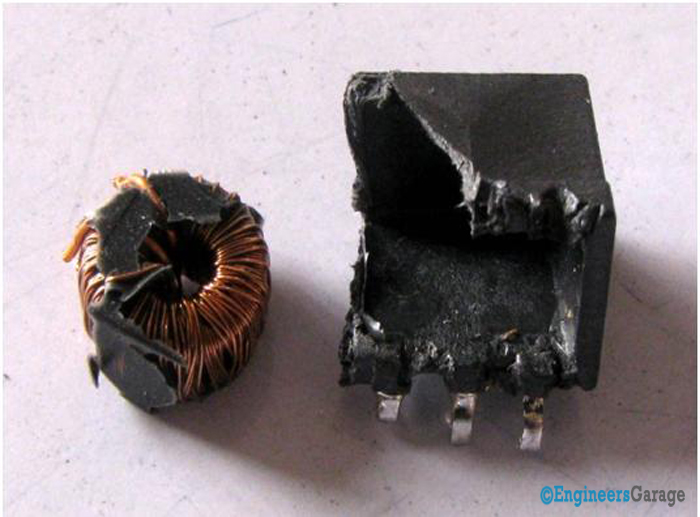 After cutting down the polymer we saw how the winding overlaps each other. It looks like a ring of copper wire as shown in the image above. The windings are placed concentrically to reduce the flux leakage in the transformer. 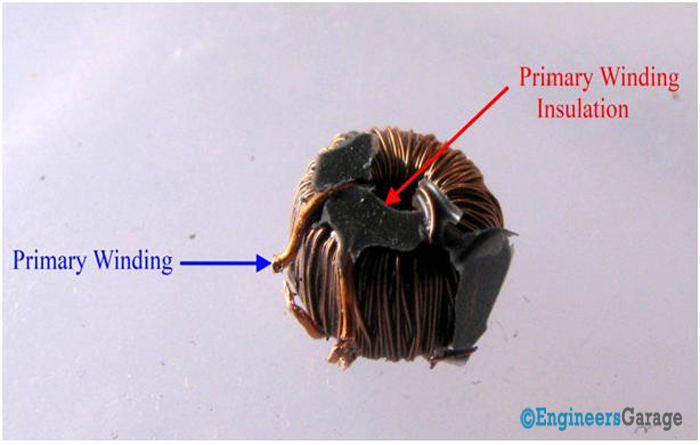 There are two primary winding of single turn and it overlaps the secondary. Insulators made from varnish or enamel is used to separate primary and secondary winding.Insulation in transformer prevents conductors shorting. 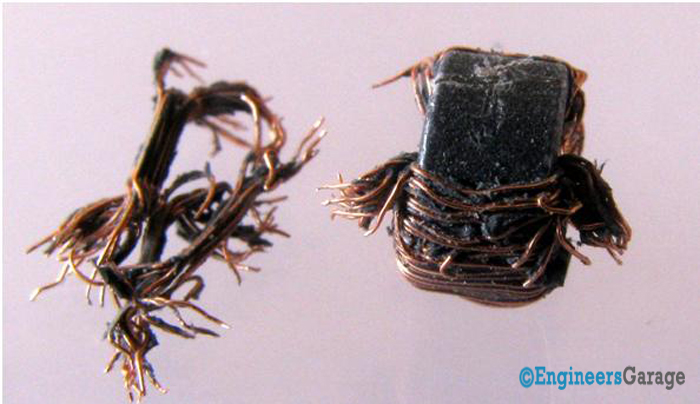 After shredding some copper wires we saw the heart of the transformer “The Core”.This type of construction of core is known as Toroidal core in which the conductor tightly surrounds the core in a manner that there is no air gap. Ferrite Toroidal core is used for high frequency working to reduce losses as well as its physical size. 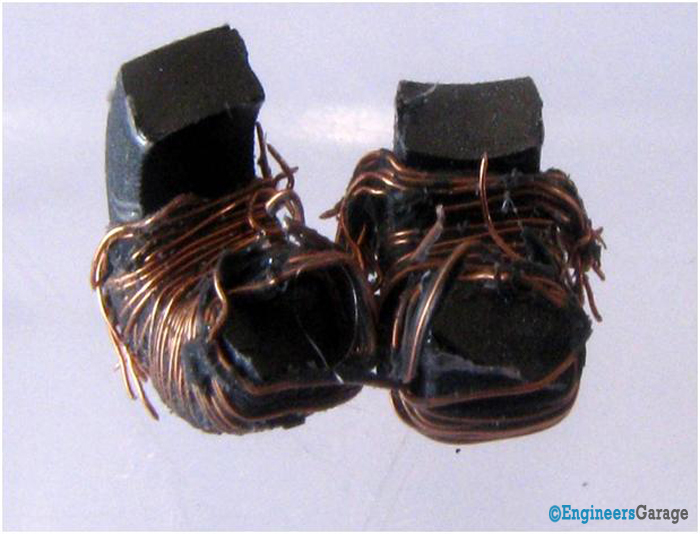