ISRO made History on 24th September, 2014 when India’s spacecraft named Mangalyaan reached the Mars’ orbit in its first attempt. This mission made India the first Asian nation to enter the Martian atmosphere and the only nation to have it accomplished in its maiden attempt. Globally, India became the fourth country to do so after the prior accomplished missions of Soviet Space Program, NASA, and The European Space Agency. Interestingly, Japan and China also made efforts to reach Mars in the year 1998 and 2011 respectively but didn’t succeed.

Mangalyaan, a Hindi term for Mars Craft, is India’s satellite which has been orbiting Mars since 24th September, 2014. It was launched by Indian Space Research Organisation (ISRO) on 5th November, 2013 from the First Launch Pad at Satish Dhawan Space Centre located in Sriharikota, Andhra Pradesh. It was lifted off using a PSLV rocket C25 under the country’s first interplanetary mission. After spending one month in the earth’s orbit, it attained Trans-Mars injection on 30th November 2013 and then finally entered the Martian orbit on 24th September 2014.

The Mangalyaan mission is a project primarily designed to demonstrate India’s capability in the interplanetary exploration. Secondly, it aims to develop technologies for exploring the Red planet and collecting vital information about it with the help of 5 instruments listed below.

Lyman Alpha Photometer (LAP): It measures the deuterium/hydrogen ratio which allows estimating the amount of water loss to outer space.

Methane Sensor for Mars (MSM): MSM is designed to measure CH4 in the Martian atmosphere and map its sources.

Mars Exospheric Neutral Composition Analyser (MENCA): It analyses the neutral composition of particles in the range of 1-300 amu (atomic mass unit) with unit mass resolution. It performs five observations per orbit with each observation taking one hour.

Thermal Infrared Imaging Spectrometer (TIS): It maps the surface composition and mineralogy behind Mars along with the atmospheric CO2 and turbidity.

Mars Colour Camera (MCC): Each time data are acquired from MSM and TIS, this camera captures the images informing about the Martian surface features and composition. 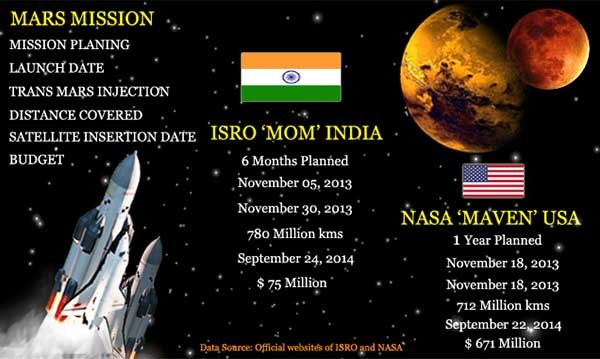 ISRO succeeded to put Mangalyaan in the Martian orbit at the total cost of just INR 450 Million, which at that time equated to around 73 Million USD. Today, this amount would translate to roughly 66 Million USD. This figure was just a fraction of what other countries had spent on the similar missions making Mangalyaan the least costly interplanetary mission ever. Considering the farthest distance between Mars and earth is 400 Million kms, the cost of this expedition is roughly INR 11 per kilometer. This is cheaper than an auto rickshaw ride in Mumbai.

Talking about NASA and European Space Agency, they incurred a cost of 671 Million USD and 200 Million USD respectively. It’s interesting to note that even the Hollywood flick Gravity was made at a total budget of 100 Million USD.

According To Mr. K Radhakrishnan, Former Chairman of ISRO, this low cost was ascribed to various factors like a modular approach, few ground tests, and long working durations (18-20 hours) for the scientists.

Physics behind the Mangalyaan Launch 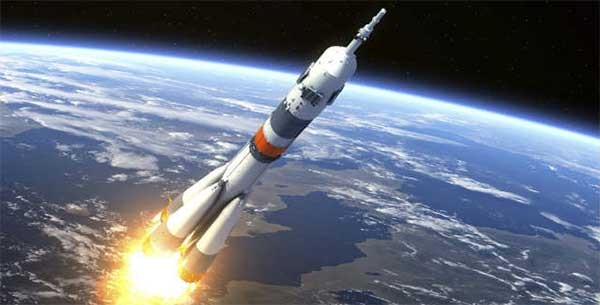 Figure 3: Launch of Mangalyaan by ISRO

• Mangalyaan weighs around 1,350 Kgs which approximately equals to the weight of a small car. One of the most important aspects of the mission was to detect the presence of methane and to measure the rate of loss of atmospheric gases to the outer space which could be further utilised in gathering data about the history of the planet.

• The craft was lifted off by India’s PSLV C25 rocket by utilizing alternate solid and liquid propulsions in four stages. On igniting the solid fuel, the thrust could not be regulated but for the liquid fuel, the engine could be turned off or on. The orbiter got separated from the PSLV C25 rocket and entered the elliptical orbit of the earth.

In order to understand the meaning of escape velocity and sphere of influence, let’s discuss the phenomenon in brief. As we know the sun is much larger than any of the planets and hence its gravitational pull dominates the solar system. So, a planet’s gravity is strongest only when an object is closest to that planet. This region around the planet is called the sphere of influence of that planet and the velocity needed to step out of this sphere is known as escape velocity.

• When Mars is at the right position, the orbiter left the earth in a direction which is tangential to the earth’s orbit. So, in order to set the orbiter in a trajectory to make it reach Mars conveniently is called trans-Mars injection. As we know, Newton’s first law of motion states that an object continues to stay in motion unless acted on by an outside force. Applying the same rule here, the fuel was required to burn only to set the trajectory and this process is called Trajectory Correction Maneuver.

• Another factor determining the entry of MOM into Martian orbit was that the angle between Earth, Mars, and Sun which needs to be approximately 44 degrees. This condition occurs at the time interval of 780 days implying that if the mission had failed to send the satellite on that particular date, it would have postponed to January 2016 and further to May 2018 and so forth. 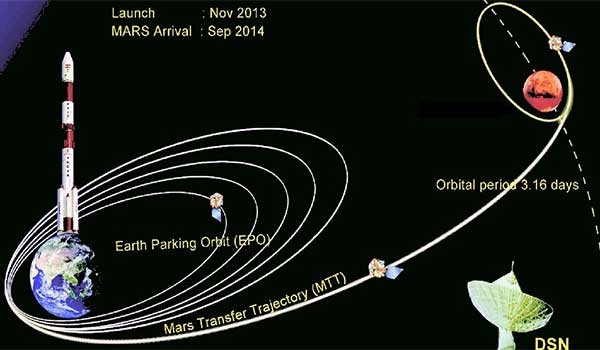 • The shortest distance between Earth and Mars is 54.6 Million which means one needs an extremely large amount of fuel to cover this distance. The scientists had to opt for the shortest route and then decelerate it to match the planet’s speed. This was only possible through an elliptical orbit of around 680 Million km which forms a tangent to the Mars and earth’s orbit around the sun. This kind of transfer of a satellite/spacecraft from one orbit to another is called Hohmann Transfer.

Soon after the success of MOM, ISRO made an announcement on 28th October 2014 about Mangalyaan 2 which will be a follow-up interplanetary mission. Apart from the orbiter, it’s likely to include a Lander and a Rover. Besides, this time it is going to be built by India and France together. The two countries signed a letter of intent for ISRO and CNES to build the spacecraft together by the year 2020.