In the previous tutorial, we discussed analog output in the form of PWM signals when using Arduino. We generated a PWM wave from Arduino by employing the analogWrite() function that approximates to a rectified sine wave. It, then, uses that analog output to fade an LED.

In this tutorial, we will discuss analog input. Most of the sensors output analog voltage proportional to a physical quantity (such as temperature, humidity, pressure, light intensity, etc).

A controller can interpret the value of the physical quantity by sensing the magnitude of this analog voltage. Also, most of the controllers have a built-in analog-to-digital converter (ADC) channels that sense the analog voltage from the sensors and convert them to a digitized reading. The digitized values are compared with the sensitivity curve of the sensor by user-defined programs to derive the value of the physical quantity.

However, the analog-to-digital conversion is used in several different applications, such as music recording, digital signal processing, digital encoding, digital imaging, and more (apart from sensors and instrumentation).

Many of these applications require analog-to-digital conversion of periodic signals or signals that might be bipolar in nature. In such cases, Arduino (and many other microcontrollers) may need to interface with the external bipolar-to-unipolar converters.

Analog to digital conversion
Analog signals are continuous in nature and have no fixed range of values. For measuring analog voltages, these signals must be converted to digital signals. The digital signal obtained after conversion is a binary number of pre-defined resolution (such as 8/10/12/14/16-bit), which is proportional to the magnitude of the analog voltage.

The peripheral — which converts the analog voltage to a digital value — is called the analog-to-digital converter. ADCs are built to use different types of modulation techniques to perform this conversion, such as the Pulse Code Modulation (PCM), Delta Modulation, Adaptive Delta Modulation, Successive Approximation, and so on.

Different modulation techniques vary in their operation, although the result is always a quantization of the analog signal. It is, then, encoded to a binary number.

There are many popular architectures (construction) for designing ADCs. The most popular ADC architectures are direct-conversion/flash, successive approximation (SAR), pipeline, sigma-delta, ramp-compare, Wilkinson, dual-slope, and time-interleaved architecture. The built-in ADCs in AVR controllers that are used in Arduino boards typically have SAR ADCs.

Analog input using Arduino
Arduino boards use different AVR/SAMD/SAM microcontrollers. Most of these microcontrollers have at least six ADC channels that are typically multiplexed to a SAR ADC. The resolution of a built-in ADC may vary from one board to another, though the ADC on most of the boards has a 10-bit resolution at the very least.

In some of the Arduino boards, the voltage reference for the analog-to-digital conversion can be set individually for each channel.

The sampling rate of the analog signal is set by pre-scaling the clock used by the on-board controller. The sampling frequency is always a factor of the clock frequency of the controller, where the factor is determined by the built-in pre-scaler.

For lower resolution (like 8-bit), the ADC may use a higher frequency to maximize the sampling rate.

The ADC features of different Arduino boards are summarized here. 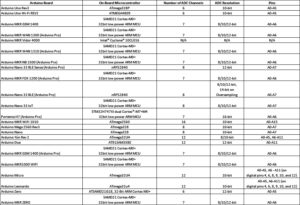 Analog input using Arduino UNO
Arduino UNO has six analog input channels. The ATmega328P controller on UNO has a 10-bit successive approximation ADC, which is connected to an 8-channel analog multiplexer. This analog multiplexer allows eight, single-ended voltage inputs at pins of the Port A of the controller. The single-ended voltage input refers to the ground (0V).

In SAR ADC, the comparator essentially compares the input voltage with the successively narrow range of voltages. At each step, the input voltage is compared to a voltage from an internal DAC (digital-to-analog converter) where the DAC output is the midpoint of the selected voltage range.

At each step, the approximation is stored in a successive approximation register (SAR). So, let’s suppose a voltage of 3.2 V is sampled from an analog signal. It’s first compared to the 2.5 V (midpoint of 0 and 5V). 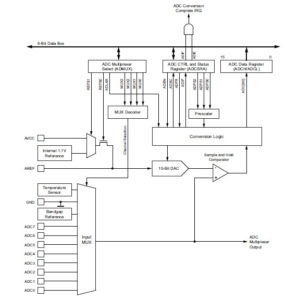 As SAR ADC on ATmega328P has a 10-bit resolution, the input voltage is successively approximated 10 times to get a 10-bit digital reading. However, if it was an 8-bit SAR ADC, it would have taken eight successive approximations to get the 8-bit digital value, and so on.

Taking the example of 3.2V, with 5V reference on a 10-bit SAR ADC, the successive approximations can be summarized here.

If comparing this with the equation of a standard, single-ended ADC conversion, the results are:

From the ADC timing diagrams, it’s possible to see that the ADC takes 25 ADC clock cycles for the first conversion and 13 ADC clock cycles for the normal, single-ended conversions. This means that if 1/128 pre-scaling is selected, it will take 200 microseconds (1/125KHz *25) for the first sample and 104 microseconds (1/125KHz *13) for the other readings.

For the auto-triggered conversions, the ADC takes 13.5 clock cycles (108 microseconds for a conversion). For the other pre-scaler, this conversion time must be even low. Typically, this ADC takes 65 to 260 microseconds for conversion, with the sampling analog inputs at a rate of up to 15k SPS (Samples Per Second). 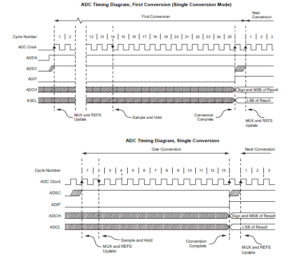 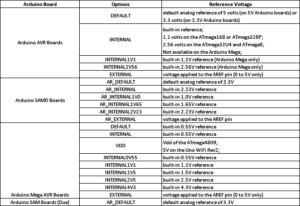 The ATmega328P has the following internal registers, which are associated with the functioning of the ADC. 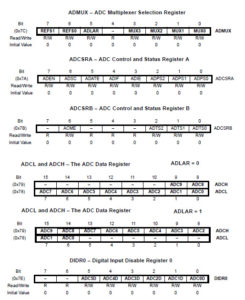 Before starting a conversion, the first voltage reference and the analog channel must be selected by setting an ADMUX register. To enable the ADC, the ADEN bit of the ADCSRA register must be set.

The bits ADPS2:0 of ADCSRA register are used to select the pre-scaler and determines the division factor between the system clock frequency and the input clock to ADC. The ADLAR bit of the ADMUX register determines how the ADC data registers (ADCL and ADCH) and are populated.

If the ADATE bit of the ADCSRA register is set, the auto-triggering of the ADC is enabled. In this case, the source which triggers the ADC conversion is determined by the ADTS2:0 bits of the ADCSRB register. The source of the trigger can be a timer/counter, external interrupt, or analog comparator.

In the analogRead() function, the first analog input channel must be selected according to the argument passed to the function. Then, the ADMUX and ADCSRB registers are passed values. The function tracks the ADSC bit of the ADCSRA register in a loop. Whenever the bit is set, it reads the values that are updated in ADCL and ADCH registers.

The function returns the value of the ADCL and ADCH registers as an integer number. The function has this syntax:

It takes only one argument, which is a valid pin number where the analog input is expected. It returns the analog reading that may range from 0 to 1023 for a 10-bit resolution, or 0 to 4095 for a 12-bit resolution. Therefore, it must be assigned to a variable that can store the retrieved analog reading. The value obtained in the variable can then be used to plot the analog signal or to make a decision according to a user-defined program.

The function has the following syntax:

If the external voltage is set as an analog reference, it should never be less than 0V (bipolar voltages are not allowed on the analog pins) and it should not be greater than 5V (overvoltage can damage the pin or even the onboard controller).

This function has the following syntax:

The argument bits determine the resolution of the analog reading returned by the analogRead() function. It can take any value from 1 to 32. It should be noted that in setting the resolution higher than 12, the approximations can suffer. Ideally, stick to 8-bit, 10-bit, or 12-bit resolutions unless there’s some strict demand to choose a higher resolution. 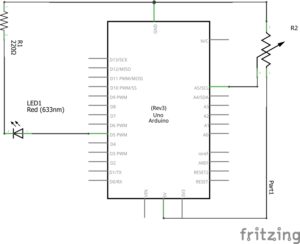 How the project works
The circuit is designed to change the blink rate of the LED by sensing the voltage from a trimmer potentiometer. The variable end of the trimmer is connected to the A5 pin of the UNO, while its fixed-ends are connected with the ground and VCC (5V DC).

The analog voltage at the variable-end of the trimmer can be varied between 0 and 5V by rotating the knob of the trimmer. This voltage is applied to the analog input A5 of the Arduino UNO.

The analog voltage from the trimmer is read using the analogRead() function, which returns a value between 0 and 1023. The analog reading is used as a delay interval in milliseconds between switching the LED ON and OFF. When the knob of the potentiometer is close to the fixed-end terminal that’s connected to the ground, the low analog voltage is applied to the analog pin A5 and the low analog reading is recorded. 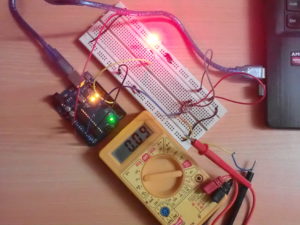 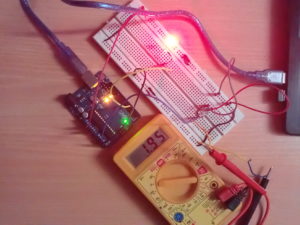 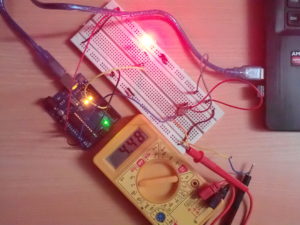 Programming guide
The three global variables are defined per:

Again, a delay equal to the analog reading is provided by calling the delay() function with the analogVal as the argument.

Requirements
Here, the components required, circuit connections, and circuit diagram are all the same as in the above-mentioned, “Potentiometer-controlled LED blink rate recipe.”

Programming guide
The three global variables are defined as follows:

The LED is interfaced such that pin 5 should serve as the current source to it. A PWM wave is generated at pin 5 by calling the analogWrite() function in which the duty cycle is set to the analog reading (factored by four).

In the next tutorial, we will discuss interfacing an RGB LED using Arduino.