The switch ‘SW’ is connected for testing in such a way that it can close and open the contact with the ground and PIN C of the BOARD_A. The PIN B should be connected with the PIN D so that the INDICATOR module can get positive voltage.

Suppose when the power is applied and the SW is open, the INDICATOR module should have the red LED glowing only and we can find the video and sound from the DTH set top box on the TV. When I toggle the switch I can hear the clicking sound from the RELAY module and the yellow LED in the INDICATOR modules glows only. Now the sound and video from the DVD- player on the TV is found.

If the BOARD_A initiates we can say that it is working perfectly as we have expected.

Now let us build the BOARD_B and test it with the BOARD_A. The BOARD_B should have the connectors for IR_RECEIVER, COMPARATOR, MONOSTABLE and REGULATOR modules. It should also include circuits for relay driving and IR indication. We have built the BOARD_B which has all the mentioned things and the image of the same is shown below. Now we can plug in the modules to their corresponding female connectors in the BOARD_B. The fully assembled BOARD_B with all the modules is shown in the following image. 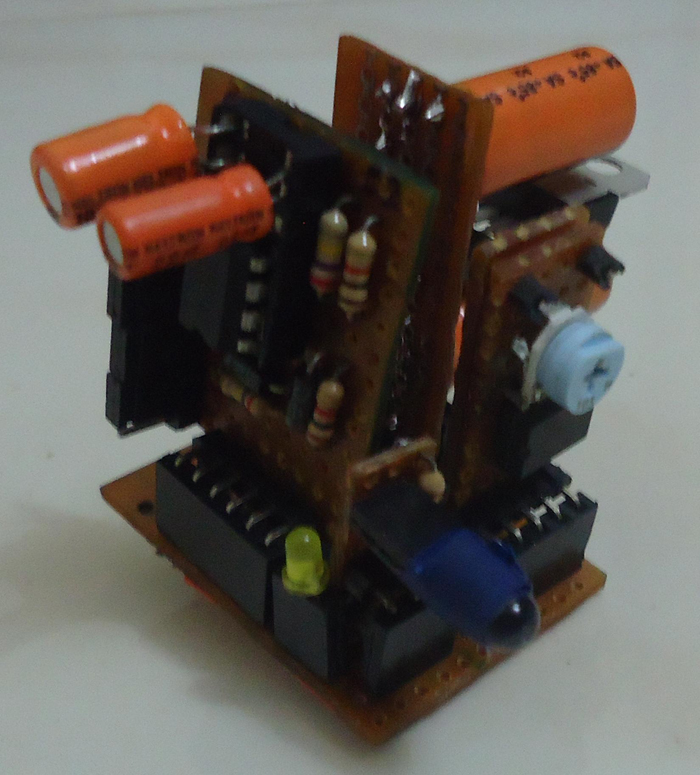 The assembly process is said to be finished when we connect the BOARD_B to the BOARD_A. The image of the BOARD_B connected to the BOARD_A is which forms our complete prototype is shown in the following figure. Now we can connect the audio-video connectors from TV, DVD player and DTH set top box. The device is initiated using a 9V, 5 A power supply and the TV or DVD remote control to operate the device.

We have successfully explained the Electronic Modular Design and Assembly technique using a sample project. We also developed the prototype of the device through the ten steps of the Electronic Modular Design and Assembly method. In the course of explaining the method we have given special care to go in depth of the working details of the project. Most of the people hate timing diagram just because they don’t know how to read them. Actually a timing diagram contains all the details of the working of a device and hence we have given special care to explain timing diagrams in detail.

We started off with a simple idea, then we analyzed the requirement, we have developed the block diagram, then we have designed the complete circuit diagram, we have assumed the reusable modules from the circuit diagram, we build them individually, tested them and assembled them together to form our prototype. The important part is that we had to design only the very basic and well known circuits each and every time and using this method we were able to integrate them into a complex circuit. Thus anyone who is familiar with the basic electronic circuits can design complex circuits and prototype them quickly using the method of Electronic Modular Design and Assembly.